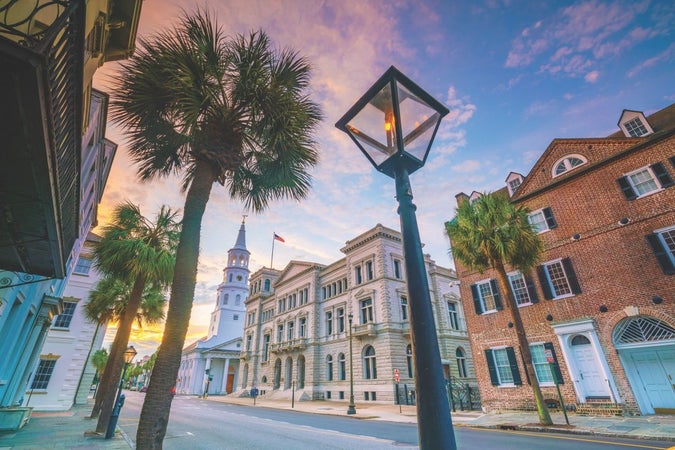 The clip-clop of horses’ hooves and the slow roll of carriage wheels ring out between the live oaks overhanging sleepy streets as the smell of hickory-smoked barbecue fills the salty air. In South Carolina, Charleston is both the birthplace of the Civil War and one of America’s oldest cities. Recently, the seemingly quiet metropolis has experienced somewhat of a tourism boom as well, fueling the state with nearly $20 billion in revenue and garnering the top spot on Travel + Leisure’s 2016 list of best international destinations. With its cobblestone streets, brightly painted colonial homes, welcoming Southern charm and world-renowned food scene, Charleston is putting South Carolina firmly on the world’s radar. Luckily for us, it’s local and a wonderful place to run.

Related: Kauai is the Ultimate Vacation for Runners

It’s no coincidence that the Charleston running scene has exploded along with its population in the past decade. The mild climate and flat terrain make the city easily runnable all year round, and the ideal conditions see athletes coming out in droves. “The Charleston running community is very active, diverse and inclusive,” says Amy Minkel, owner of Fleet Feet Sports Mount Pleasant. “You will see people of all ages, demographics and ability levels running together along the many scenic routes.” There is also a strong social component to the local running scene; Fleet Feet Sports hosts weekly pub runs, while the Charleston Beer Runners club gathers weekly for a few miles and a cold beer. 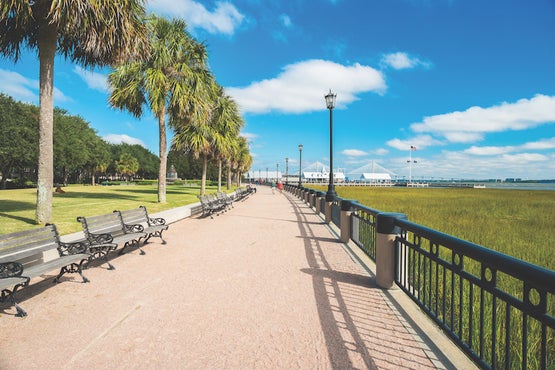 Over the Bridge and Through the Battery

Hands down, the top spot for runners is the Cooper River Bridge. Like many coastal cities, you’re hard-pressed to find a hill in Charleston—that is, unless you count “the bridge,” as locals know it. The structure stretches exactly 2.5 miles from Mount Pleasant to the city of Charleston and features a separated bicycle and pedestrian path, making it one of the city’s most popular places to work out.

Charleston’s Battery lines the western and southern edge of the peninsula and is ideal for those hoping to take in the more historic sites of the city on running foot. You’ll see Fort Sumter, the Charleston Harbor, Battery Park and, of course, the famous Rainbow Row, a stretch of 13 brightly painted colonial homes dating back to the 1780s—it’s one of the most photographed areas in Charleston. From the Battery, runners can easily make their way through the streets of downtown, passing the high-end shops on King Street and the local artisans filling the Charleston Market on Market Street. 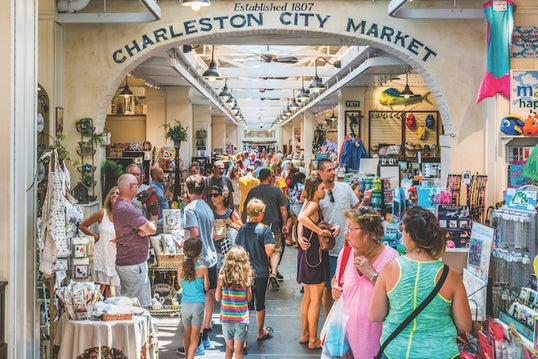 On Your Mark, Get Set…

Home of the famed Cooper River Bridge Run, the country’s third-largest 10K, Charleston hosts more than 40,000 every spring. Runners are welcomed into downtown by cheering crowds lining the historic streets that lead to the finish. While many participants come dressed in elaborate costumes and walk or run the course for fun, elite athletes from around the world visit to compete for the $10,000 first-place prize. The Bridge Run sells out in advance every year, so prospective visitors are encouraged to register early for the event, which usually takes place the first Saturday in April.

The Charleston Marathon and Half Marathon, held on Martin Luther King Jr. weekend, incorporates some of the most famous parts of the historic downtown area while also giving runners a comprehensive view of Charleston’s diverse neighborhoods. Starting near the Citadel, a historic military college, the January race runs south toward the end of the peninsula, bringing runners onto the Battery and past Rainbow Row. Runners then make their way along King Street and up through the working-class neighborhoods of North Charleston. Full marathoners explore the Charleston Naval Complex before finishing in Park Circle.

Born out of the fine arts community, the race benefits Engaging Creative Minds, a nonprofit organization that funds art programming in Charleston County Schools. The official race poster is also designed by a local artist and artisans sell their wares at the expo. Runner Amy Scott-Lundy notes that the race offers something for everyone from 5K runners to marathoners and even cyclists with a bike ride on the Sunday after the race. “The 5K is the best deal in town, because you get all the perks as well as a finisher’s medal,” she says. In addition, all runners receive a backpack, and the finish-line party features shrimp and grits (a Charleston staple), plus plenty of beer and mimosas. 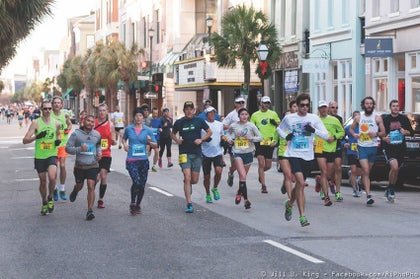 While the historic streets of downtown Charleston are bustling, there’s a quieter, more laid-back atmosphere to be found just across the bridge. South of Mount Pleasant is peaceful Sullivan’s Island. Whether you choose to lie on the sand, enjoy a taco at Taco Mamacita or lace up your running shoes and hit the beach, Sullivan’s Island will take you back to the lazy days of summer, no matter the time of year. Those looking for a party atmosphere should head to the Charleston side of the bridge and explore Folly Beach, about 15 miles from downtown and known for its wide sandy beaches, great surfing conditions and eclectic bars.

Once you’re done running, exploring and catching some rays, it’s time to refuel. Charleston is famous for its restaurant scene, which was featured on Bravo’s “Top Chef,” as the backdrop for its 14th season. Although you can find every type of food under the Charleston sun, traditional Southern comfort dishes and seafood are its specialties. Start your day with some breakfast at Callie’s Hot Little Biscuit or, if you’re in town on a weekend, catch brunch at the Marina Variety Store Restaurant, one of two eateries in Charleston located directly on the water. Manager Ryan Collins recommends the Lowcountry Hash Browns, which feature crispy potatoes with grilled onions and peppers, local grilled shrimp and two eggs served any way, topped with hollandaise.

Of course, no trip to Charleston is complete without eating the Lowcountry region’s most famous cuisine—shrimp and grits—at 82 Queen. Manager Bobby Jackson says, “We use local, yellow, stoneground grits that are slow-cooked with heavy cream for pure decadence. The local shrimp are sautéed in a house-made bourbon barbecue sauce, and the dish is topped with sharp cheddar cheese, chives.” Reservations are recommended, as this turn-of-the-century home and courtyard is in high demand. For a more laid-back experience, check out Closed for Business, serving craft beer, cocktails and casual fare in downtown Charleston.

While it may be a race that draws runners to visit for the first time, it will be the city’s Southern hospitality, world-class cuisine, mild climate, beaches and historic colonial charm that keep them coming back. As we say down South, “Y’all come back now, you hear?”

Related: 6 Races That You Can Run With Your Dog 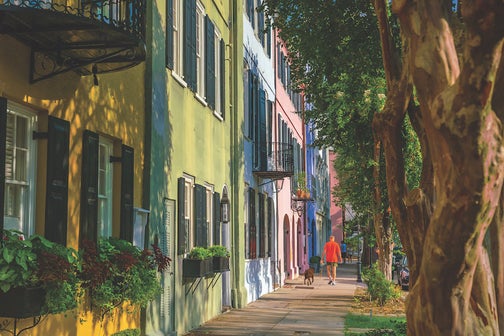 One of the hardest things about traveling can be figuring out where to go or who to run with. Fortunately, there are tons of great group runs all over Charleston that welcome tourists with open arms.

Thursdays, 7 p.m.
3- to 5-mile pub runs with the Charleston Beer Runners. Open to all runners 21 and older. Locations change weekly, so check the Facebook page.

OnShore Recreation hosts a weekly run leaving from Hampton Park downtown. Up to 8 miles. Paces from 7- to 11-minute miles. 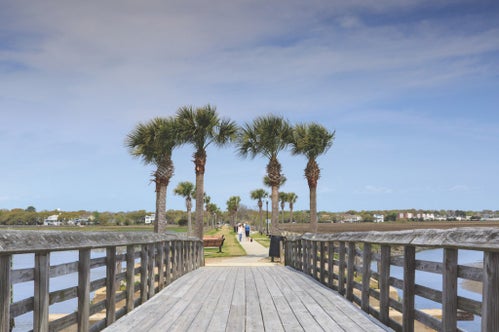 I spent several years traveling to Charleston weekly for work and got many chances to run, eat and play in the “Holy City.” If you have a few extra days, check out my favorite haunts.

The Old Village of Mount Pleasant has the quaint feeling of a small town in the Old South, just minutes away from Charleston. Start your run at Red’s Ice House on Shem Creek and head down Church Street until it ends, making a quick right onto Pitt Street. Follow that until it ends at the beautiful Pitt Street Bridge, where you’ll have views of the Charleston Harbor and salt marshes.

With locations in Summerville, West Ashley and Mount Pleasant, there is sure to be a “Triangle” not too far from you. Try the house-made black bean burger or one of the many other creative options.

Get Your Drink On: Dig in the Park

If you’re looking for craft beers in a fun pub setting without the craziness of downtown, check out Dig in the Park, located in Park Circle. The pub is dog-friendly and features tons of outdoor seating.

10 Reasons Hawaii is Your Next Summer Vacation

Video Shows the Epic Experience of Running through Central Park