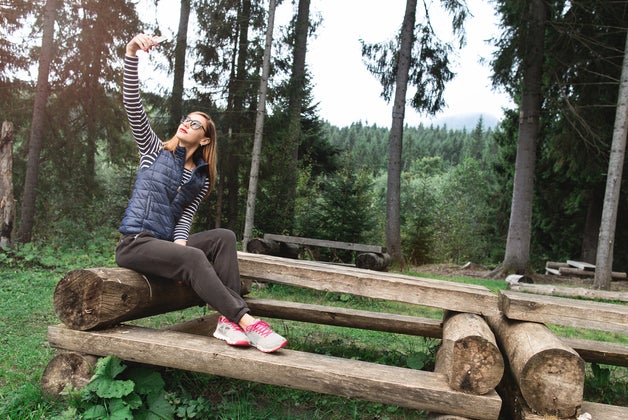 Scroll through any runner-heavy social media feed and you are sure to find a shot of a GPS watch face displaying double digit numbers, a gorgeous track picture with the author declaring endless speedy splits and, most likely one or two goofy-faced, sweaty racers with big smiles and bigger bling held prominently into the lens, touting paces and distances of epic proportions. It begs the question, Do these runners ever rest? Of course they do; they just don’t brag about it—until now.

Last month Amelia Boone, professional ultra runner and obstacle course racer, posted a picture of herself that her 17.9K Twitter followers probably didn’t expect. She was drinking a beer in the shower with the hashtag #epicrestday and a movement was born. Boone has since joined forces with Olympic swimmer Caroline Burckle and November Project maven Jonathan Levitt to promote the awesomeness that is #restdaybrags and have slowly started to see rest getting the recognition it deserves.

In the fast-paced, more is better, no rest day environment of running and racing, Boone commented in a recent phone conversation that “it’s okay to admit you take time off,” adding “no one brags about rest days, but they should!”

Jonathan Levitt, InsideTracker sales manager and avid November Project member, expanded on Boone’s comment saying, “It’s so easy to brag about the hard stuff because you want to say ‘look how awesome I am’ but it’s the other side [the rest] that’s not so easy to brag about, which is why we want to highlight it.”

Why are rest days so hard? Levitt thinks the tough part of being still is having to “trust the process” of training which can be mentally difficult but much needed. Boone added, “I hate taking time off but if I can see I’m not the only one (through #restdaybrag posts) it’s helpful knowing we’re all in this together.” Runners are nothing if not “in it together” and any runner who has been injured from overtraining knows the value of rest days.

Rest days go a long way in preventing injury. Unfortunately, Boone knows all too well about injury, suffering from two stress fractures (femur and sacrum) in the past couple of years. “It’s so much more relatable to talk about being on the sidelines and [being injured] because everyone, regardless of activity level, can relate to that.”

Unfortunately we live in a running culture that promotes being “better than yesterday” and taking “no days off” (both mantras are popular hashtags for major athletic companies). Levitt remembers seeing posts like, “I did this run and my knee felt horrible and was swollen when I got back,” and instead of people being outraged the comments were “You’re a hero!” and “Such a badass” when they should have said, “Stop before you really hurt yourself.”

Caroline Bruckle, an Olympic bronze medalist in swimming, remembers the mentality being very different when she was at her athletic peak from 2004 to 2010. “We were training eight hours a day and were extremely overtrained but now the school of thought for elite athletes is less is more and coaches are figuring out how to train smarter,” which is why Bruckle jumped in on the #restdaybrag slow train to sleep and recovery for better performance.

Rest is not active recovery. Boone, Levitt and Bruckle want to be very clear that #restdaybrags are not “active recovery” day shout-outs but complete and total rest. “There is a place for active recovery days,” said Boone. “But this is not that! Even if you’re resting from running and going for a swim, that’s still taxing your mind and body. What I really want to highlight is complete rest.”

This is exactly why Boone says the Twitter and Instagram Rest Day Brag accounts “have been therapeutic for me,” and all three athletes can only hope to see a lot more epic rest days being shouted and congratulated in the near future.

Join the movement by following the social media accounts and using the hashtags #epicrestday #restdaybrag #LemmeeSeeYaLazy #MakingRestGreatAgain and feel good about taking at least one day off.