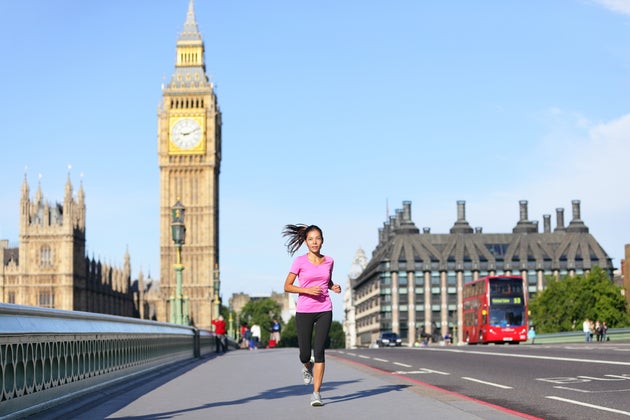 When I first started running, I discovered running blogs—or more to the point—American running blogs. Fitness blogging hadn’t quite made it to the UK yet, so everything I learned about marathon training, racing and long runs was from those bloggers (Note: I am eternally grateful to Emily from Daily Garnish for virtually getting me through my first 26.2). However, it was as I started racing more, chatting with American runners and running both in the UK and abroad, that I’ve realized that although running is universal, there are some big differences between runners in the US and here in Britain…

We run in miles—and kilometres.

It’s confusing and hard when you’re running with friends and trying to decide a pace. I’ve been aghast when someone suggests we run an easy pace, ‘like 5-5.30’, before realizing they are discussing distance rather than actual pace (phew). Our races are often signposted in both miles and KM—for example, the Royal Parks Half Marathon last weekend had mile markers and also 5K, 10K, 15K and 20K signs.

Medals are given at all races, no matter the distance.

I’ve heard that there are often races in the U.S., mostly shorter distances, that don’t give out medals. I know friends here that won’t do a race unless they get a medal; they are a prerequisite. Even if it’s a local charity 5K, there is a medal. Also our races start later, typically around 10 a.m. Hooray for sleeping in.

We need to be prepared for all weather.

We don’t have the hot-hot summers or very cold winters, but you better be prepared for every type of weather on your long run. It could start chilly and heat up, or more likely, start to rain heavily when you are exactly at your turnaround point. It rains a fair bit, snows sometimes and is rather grey, but that can create some dramatic scenery across both cities and the countryside, not to mention the euphoria and happiness you feel as a Brit when the sun comes out. Also, no matter the weather, you have to talk about it—it’s a rule of being British (or even just visiting the UK!).

The London Marathon is a BIG deal.

For a long time, the London Marathon was really the only marathon you could run in the UK. That is far from the case now, however if you say, “I’m running the marathon,” people will assume it’s London. Many people run it as their only marathon, run to raise money for charity or race in fancy dress—I’ve just decided to run next year’s London Marathon in a Runner Bean outfit to raise money and awareness of mental health issues. Edinburgh, Brighton and Manchester are following in London’s footsteps.

There’s no altitude to deal with.

We don’t have any areas in the UK that are much above sea level, an average of 531 ft (compared to 2493 ft in the U.S.!). Although we do obviously have our fair share of hills—on a recent trip to Utah and Colorado, I was floored by the altitude (up to 8,000 ft)—it was very humbling as my pace was significantly slower than my flat, sea level runs back home.

A running kit is more expensive.

When you buy your next pair of running shoes, Gu or Moving Comfort sports bra, spare a thought for us Brits who have to pay far more for the same gear. And we don’t even have Oiselle over here! I stock up on gels and items for my kit when I’m in the U.S., particularly at the expos—who can turn down 20 gels for $15? We do have some awesome shops and brands like Sweaty Betty, however.

RELATED: 10 Reasons You Should Run An International Marathon

I’ve moved from London to the countryside just outside the city, and have discovered that the runners in the country are far friendlier. On my last long run, literally every single person nodded in acknowledgement, smiled and said, “Good Morning!” on my run—in London, this is not a thing. Perhaps it’s the transition to more trails rather than roads, where the goal is to enjoy the run, the view and the miles, rather than a focus on pace.

The sport is growing in the United Kingdom.

It excites me so much to see the growth in the sport that I love across the UK. In terms of casual runners, weekend park runners and those racing regularly, the number of people running has doubled between 2009 and 2015. The sheer number of races (especially small local runs) has also increased dramatically, as evidenced by the numerous half marathon options available this past weekend in and around London.