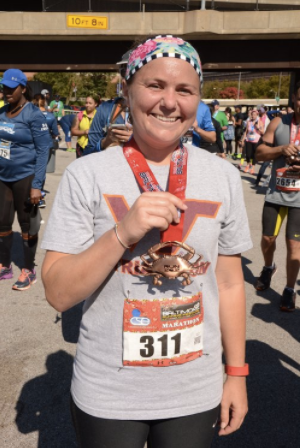 Baltimore runner Leigh Rogers had her life tragically cut short when out on a run with her dog on February 15. It was day 351 of her run streak.

Her fiancé, Rob Hritz, shared her story on Reddit, explaining that Rogers was crossing a major intersection in the heart of Baltimore City, the Inner Harbor, when both her and their dog were struck by a car. The dog recovered after being taken to a local animal hospital, but Rogers, however, was taken off life support a few days after the accident due to massive head trauma sustained in the accident.

Her organs were donated and saved at least three peoples’ lives.

Hritz was on his own run streak—he made it to day 280 until he was in the hospital by Rogers’ side—but restarted his streak on March 1 in her honor. “I figured I would continue what she cannot do anymore,” he said.

On March 18, Charm City Run McHenry Row in Baltimore is hosting a Memorial Run in Leigh Rogers’ honor, and runners from all over the city will come together at 11 a.m. for a guided 5K run and 1-mile walk.

If you’re not in the Baltimore area you can still run in her honor by joining the Strava group ‘Miles for Leigh,’ created by Hritz, with the purpose of finishing her goals for 2017 for her, as a team. This year, she was hoping to run 2,017 miles, complete a 50-miler, complete a 100-miler (she was an experienced ultrarunner) and run a sub-7-minute mile.

For This Deafblind Runner, Her Dog is More Than Just Her Best Friend