I spent most of the last 24 hours feeling numb.  When I woke up early yesterday morning for my 10-mile run, I didn’t check the news or social media.  It wasn’t until after my run was over and I was grabbing coffee with a couple of fellow runners that I found out. “There was a mass shooting in Orlando…about 50 people dead…at a gay nightclub.” It didn’t really sink in when I heard it, just like when I first found out about 9/11 while I was in an elevator at work. It didn’t sink in until I got home and started watching the news and seeing all the commentary on my social media feed.

I sat there and watched it all, and I was numb. And then I saw the news story on the series of text messages from the son trapped in the bathroom to his mother, pleading with her to find some way of helping them. As a mother with a son who is getting older and spending more time away from me, that text message series affected me more than anything else. I got up and tried to go about my day, yet that screenshot of messages would not leave my mind.

We tried taking our kids out for a late lunch and distracting ourselves, but there was a heaviness in the air, and it was difficult to breathe through it. It happened that yesterday was also the day of the Los Angeles gay pride parade, and so finally after lunch, it seemed like the only possible answer was to take my kids there, to show them love and pride rather than hate. We walked through as a family, and it certainly helped some. It made me feel a little less helpless, but I still came back home to being numb with that screenshot plastered in my mind, my heart caged inside my chest.  I went to bed looking forward to a new day.

I hit the track and with every round of sprints, I felt. I felt my heart initially pounding in my chest and then in my throat wanting to explode. I felt my lungs breathing and gasping for the air it hadn’t properly breathed since yesterday morning. I felt anger and pulsing in my temples. I cursed. I pounded the pavement with anger, grateful there wasn’t anyone there to witness my unleashing of emotions.  In my recovery rounds I thought…I thought about how I had just a couple days before received my July issue of Women’s Running with a transgender woman on the cover, and how she had warned that this cover may come with some backlash. I thought about how when I walked with my kids through the LA pride festivities, my daughter didn’t understand what the big deal was or why they had to celebrate just being themselves, as she has grown up in a different time than I have. I thought about that screenshot that is plastered in my head and let my tears flow for that mother…my tears and sweat getting absorbed into the track as I kept pushing forward. 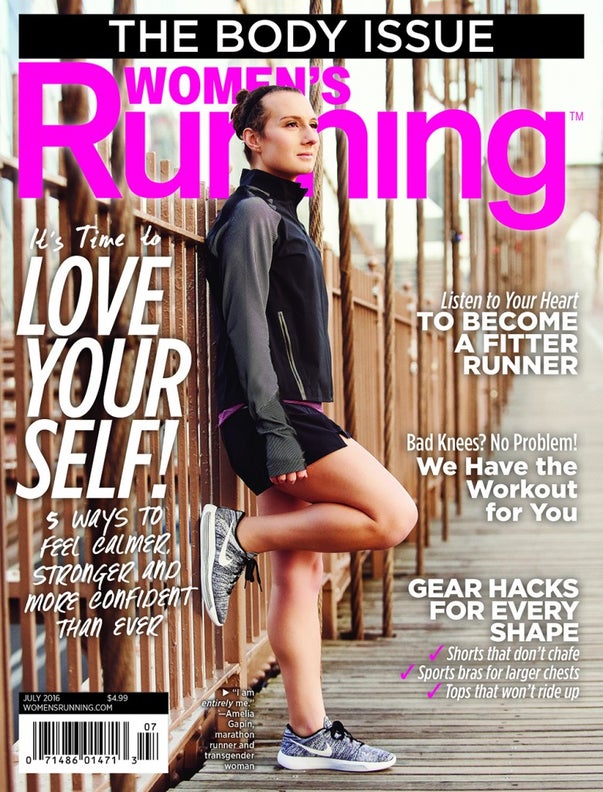 I am grateful that I have running, because it allows me to feel. There was a time when the only answer I had to feeling hurt or overwhelmed was to rapidly shovel unhealthy amounts of food down my throat and muffle the pain that begged to be felt. I’d replace that hurt with food that would just make me feel disgusted and want to go to bed.

Did my run solve what happened yesterday?  Of course not, but it allowed me to not be numb and to feel. And now that I feel, I can think about what else may be the answer other than just taking my kids to show them love and pride. What else can I do?  What can you do? Let us not ignore what happened and move on with our day. Let us think about how each of us can see what is going on around us, and what each of us can do about it individually and together.