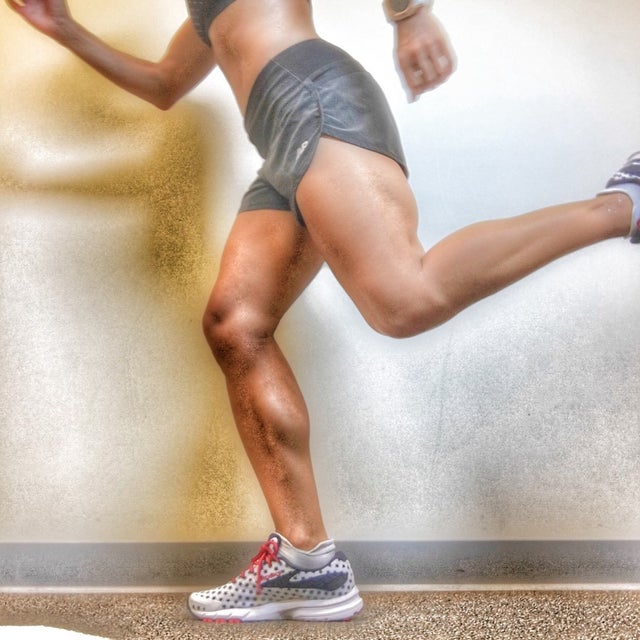 At 41 years old, Allie Burdick never set out to qualify for the USA Triathlon Nationals competition. Yet on August 13, this blogger, freelance writer and mom to twins finished the Olympic-distance event in Omaha, Neb., at 39th place out of 114 in her age group.

Burdick has been a runner for more than 15 years. In 2000, following a break up with a boyfriend, she laced up her shoes and started running.

“I started running a few miles every day to take my mind off of it,” Burdick says. “Then I joined a gym and fell in with a bunch of girls who were runners. They coaxed me to come out for some runs with them and I just fell in love.”

Burdick, who had always been interested in fitness, went on to run a few marathons. While she liked it, she found herself needing a change. “I wanted a new challenge,” Burdick admits. “I had run a bunch of marathons and I wanted to do something different.”

She completed her first triathlon three months after she delivered twin boys. “It was the worst idea ever,” she laughs. “For some reason, I thought it would be a great post-partum goal!”

However, Burdick didn’t feel prepared for her first triathlon. She only owned a mountain bike and had never done an open water swim in her life. She didn’t feel successful and she didn’t win any awards—but she was hooked. She loves triathlons because it forces runners to get out of their routine, mix it up and stay challenged.

“My body really appreciates the three different disciplines,” Burdick says. “Instead of just the constant pounding of the running. I was starting to get some overuse injuries [from running]. And the swim helped my cardiovascular—the swim really improved my running. So now I always encourage runners to swim.”

Transitioning from marathon running to triathlons has had challenges, however. She needed new equipment and gear when she got serious. There were also rules she had to learn, such as what is acceptable passing and drafting during the bike ride.

Burdick doesn’t think that triathletes need a team to train (she lives in a remote part of Connecticut), but she has a trainer that has made all the difference. Finding the time to get into Olympic-distance shape has required a lot of balance, sacrifice and discipline. But her trainer, Becky Bryant, has helped her figure it out.

“I have so many other things to manage in my life between work and kids, just like everybody. So it is just easier to look at my training and just go do it—have somebody tell me what to do and do it. I felt very experienced in running but not in triathlons.”

But Burdick reminds us that she is focused on a competitive level right now. Plus, she works part-time, which allows her the flexibility to train as hard as she does.

Training with such precision and intent has, of course, meant significant changes to Burdick’s body and her own self-image. As she continues to race, she has grown to love her body for its strength and what it can do. Rather than focus on a size, number or weight, she has instead found herself celebrating how strong she is.

“Recently I took a picture of myself running with my timer camera app on my phone,” Burdick says. “When I saw the result, I think my mouth literally hung open. The size of my hamstrings and calves were ridiculous! How had I not noticed? Instead of feeling badly about my ‘big’ legs, I was so proud of myself knowing that hundreds of miles of cycling produced those muscles—I had the winning times to prove it!”

Burdick reminds women that being athletic and active requires a different approach to nutrition and fitness—a healthier one, she believes. “As I progress in my triathlon racing and competitions, I’m more driven by how I can use my body to perform than what it looks like,” Burdick shares. “I appreciate the hard work it does and I’m focused on fueling the ‘machine’ for performance, not a dinner party.”

For those who want to get into triathlons, she says to just have fun with it. Triathlons at the local level are different than national and world levels. A coach isn’t necessary and getting started is easy. And don’t be afraid of it! Burdick says that first time triathletes should use the bare bones for equipment, like she did, and see if they like it. She recommends finding someone with a little experience who can explain what is actually needed and what isn’t.

Burdick isn’t sure what her goals after Nationals are, but she’s definitely not done.

“I am just so amazed to see what you can do when you put your mind to it,” Burdick says. “I never thought I would be able to swim a mile in open water or bike the way I do now. It is that challenge that keeps me going. I just want to see what I can do next.”