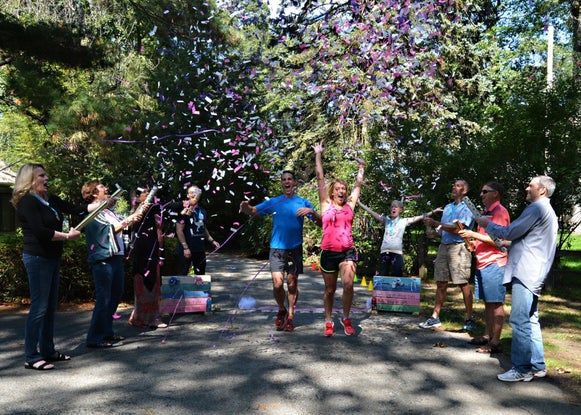 Greg and Sasha Stevens did what many parents-to-be are doing these days: hosted a gender reveal party to share the news with their family and friends. Becoming almost as common as baby showers, gender reveal parties are a surprise way to let the couple know if they are having a boy or a girl.

Except the Stevens’ did it while running through a pretend finish line—and cheering through pink confetti. It’s a girl!

“We made a miniature finish line that my husband and I ran through, and once we ‘broke the finish line tape,’ confetti cannons exploded into the air, revealing we would have a baby girl! This is our first child and we couldn’t be happier,” said Sasha of the special day. 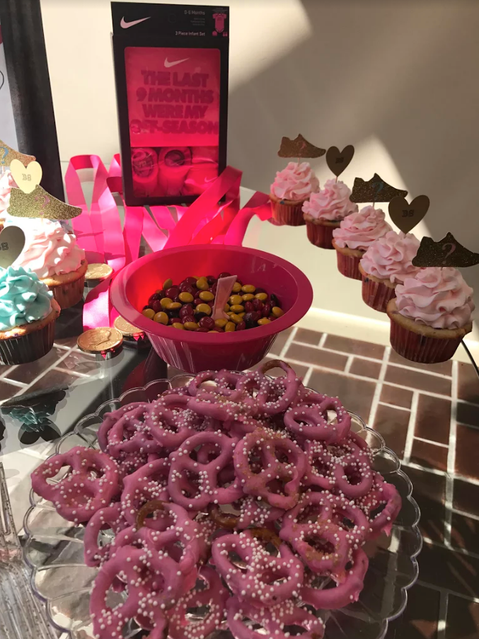 Both future mom and future dad are avid runners; in 2016 they ran 56 races between the two of them. “So far I’ve run a race every month of my pregnancy and will continue to do so. It’s been an amazing journey so far,” says Sasha.

The couple has an entire room in their house dedicated to their love of running, complete with a gear closet, treadmill, race posters medals and their shared age-group awards. Sasha says all of their friends always refer to them as the running couple. “On top of that, a lot of our vacations are actually run-cations. We love to travel for races and have a goal of running a race in every state someday.”

However, Sasha says it goes deeper than just a love for the sport; running has brought them closer together as a couple, and it “only made sense to do a gender reveal that was running themed” They also had cupcakes decorated with tiny running shoes!