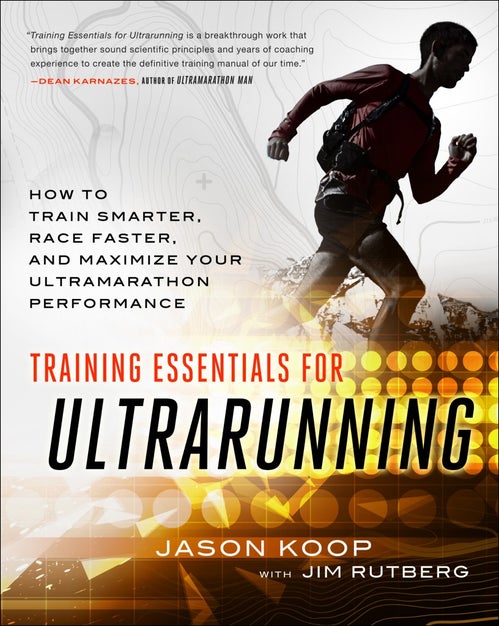 Adapted with permission of VeloPress from Training Essentials for Ultrarunning by Jason Koop, coach to elite ultramarathoners. In his book, Koop reveals his highly effective ultramarathon training methods for ultrarunners of all abilities.

In my experience, most ultramarathon athletes, even the elites, find success through a lack of failure on race day. They achieve their goals, win races, and get those coveted belt buckles not because they ran one section very well but because they prevented the negative. They prevented time spent at 0 miles per hour. They prevented themselves from becoming a nauseous, sore, blistered, battered, and stumbling mess. They continued to be able to eat, drink, and locomote down the trail, even if it was not very fast. Because so many things can go wrong, and the penalties for failure are high, “success by lack of failure” is a key element in successful ultramarathon running. These failure points are somewhat universal, as indicated by the research I cover further in my book, and help define the limiting factors for ultrarunning. The very small exception is elite athletes competing in 50Ks and 50-mile distances and flat 100Ks. This is because the finish line for the elite athletes in those races often comes before the failure points discussed in this chapter have a chance to impact performance.

All reasonably healthy individuals can locomote at the necessary speed to beat the cutoffs for any ultramarathon. I say this not as an opinion but as a biomechanical fact. The preferred walking speed for the average human is around a 19-minute mile (Levine and Norenzayan 1999; Browning and Kram 2005; Mohler et al. 2007). With a little effort, one can easily achieve 18-minute miles, which is a pace that would yield a 30-hour 100-mile ultramarathon finish.

As of this writing, Timothy Olson holds the course record for the Western States 100 at 14:46:44. This time works out to about 8:50/mile. When we tested Timothy in our lab, his lactate threshold pace was under 6:00/mile. At a pace slower than 6:00/mile, his aerobic system can keep up with his energy demand, delivering oxygen to his muscles at a rate that is sustainable with few negative byproducts. Having coached Timothy since he set that record, I can attest that on any given day, an 8:50/mile pace is not challenging for his cardiovascular system, even on terrain similar to that of Western States. Yet if you look at his Cal Street section (from mile 62 to mile 78), you will see that he ran for 16 miles with a net elevation loss at a pace of nearly 9:00/mile. From the standpoint of cardiovascular fitness, that 9:00/mile pace, which is more than 50 percent slower than his lactate threshold pace, was easy. It was essentially a normal recovery-run pace for him.

Related: How An Ultramarathon Helped One Runner Heal

So why, on race day, 62 miles into a record-setting performance, couldn’t Timothy run faster than his normal recovery-run pace for the 100-mile ultramarathon? The answer lies in the fact that there are many stressors on race day, and success in an ultramarathon has far more to do with your ability to cope with the sum total of those stressors than with just the capacity of your cardiovascular system.

How you handle those other stressors determines whether you succeed due to lack of failure.

Jason Koop is the Director of Coaching for CTS, coach to elite ultrarunners, and an elite ultramarathoner. His new book Training Essentials for Ultrarunning reveals his highly effective ultramarathon training methods. The book is now available in bookstores, run shops and online. Learn more at velopress.com/koop.