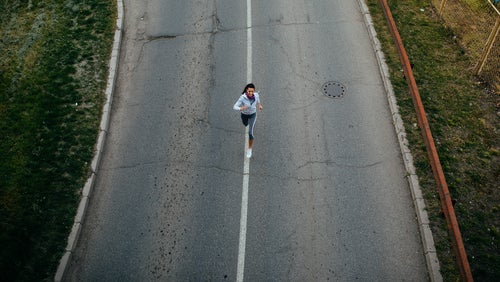 A runner’s worst nightmare happened during the popular Ragnar Relay race, this one running from Hull, Mass., to Provincetown, Mass. During one of her relay legs, the runner felt like she was being followed, according to CBS Boston.

“I started to pick up the pace because I felt like he was too close and could have gone around me,” she recalled. “I was concerned why he wasn’t going around me.”

It was around 10 p.m. during the race, which runs with teams through the day and night for two days, and someone grabbed her on her way to the next checkpoint. “He jumped on me, had his arms around my neck and pushed me to the ground. He was choking me, strangling me and shushing me,” Renee told reporters.

“I was trying to yell but I was getting dizzy too. I was just trying to save my life really.”

Related: 6 Important Safety Tips For Your Next Run

A woman named Pam Franklin helped save the terrified runner, and the participant wanted to thank her. Franklin heard the commotion from her porch, since the race runs through residential areas without closed roads. “The woman yelled ‘I don’t know you’. I asked if she needed help, ‘Are you okay?’ and she asked me to call 911,” Franklin remembered. It was enough to startle the attacker, who fled the scene.

“I didn’t think he was going to stop, I was very scared,” said the runner. She goes on to say that Franklin probably saved her life by intervening and scaring her attacker off. “I was very happy that I was able to help her. I’m happy that she’s going to be okay,” said Franklin. In a statement Ragnar Relay said, “Nothing is more important to us than the safety of our runners. We are working with our internal staff and local authorities to review the events.”

The runner was checked out at the hospital but returned to the race to finish it. “I was determined he wasn’t going to stop me,” she said.