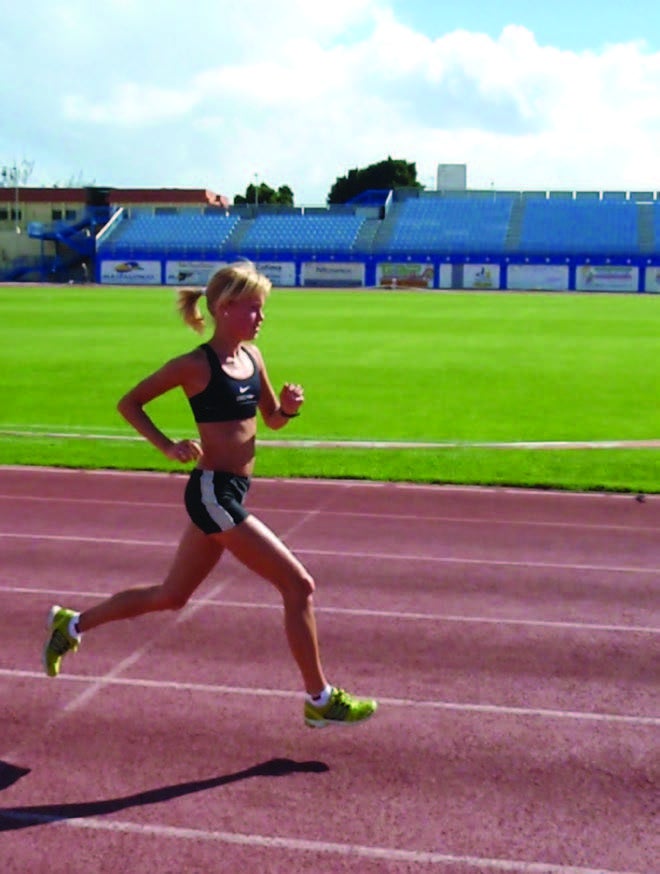 In 2009, college sophomore and track star Monika Kørra was grabbed by three men on her way home from a party and brutally raped. Within hours of being released, Monika resolved that she would not be a victim – she was going to be a survivor.

Kørra tlls her story of survival in her new memior, Kill the Silence. She has shared an excerpt from her story with Women’s Running.
***
On Christmas Eve 2009, I had gone to [my childhood skiing town of] Budor, because I had experienced a loss greater than any other in my life, and the only way I knew how to move beyond it was to train harder than ever. I turned to what I knew best—the same way I responded after a race that hadn’t gone as I’d hoped. First, I would experience panic and the desire for wish fulfillment—I wanted to get back out on the track immediately and do everything different, fix every mistake. I was certain that a bad race meant it was over—my running career, my chances of progressing, everything gone. If I could just get out there again, maybe no one would notice that I’d failed.

Over time, I’d learned that first reaction wasn’t the best reaction. No good could come of rushing right back out there. I needed to give myself time—time to reflect, to analyze and to plan a better strategy. I also came to understand that my career wasn’t over, that the stakes of every race weren’t that high. We all have good races and bad races. I couldn’t outrun my mistakes or pretend that they hadn’t happened. I had to learn from them. What was the point of enduring if all you were going to do was repeat the same mistakes and wind up back at the starting line having learned nothing?

I’d come to think of it like this: We couldn’t ever expect to have a completely pristine, track-free trail. Those other marks would still be there, showing where our missteps were, where we’d not taken the most efficient line around a turn, but that was okay. We’d eventually settle into a groove and make the fastest progress.

That morning in 2009, my parents had both gone off to work. I decided that I needed to get my body back into its familiar routine. I got out of bed and struggled just to pull on my base layer. It was as if the polyester and spandex had been transformed into some kind of super fabric that resisted my muscles’ efforts to overcome the forces of their friction and resistance. As I pulled and tugged, I sat down on the bed, breathing hard and crying, remembering how someone else’s force had stripped me of my dress, my bra and my underwear.

If I felt like my power was diminished now in the simple act of clothing myself, then what had taken place on the night those three men overpowered me? What they had stripped from me couldn’t be measured on a stopwatch. I knew that I would need to achieve a series of victories if I was ever going to reclaim some of what had been taken from me. And in that moment, I realized that getting dressed and going to Budor was going to be the first. I knew that more than my body had been damaged, but that is where the harm had begun, and it was there that I was going to begin to heal.

I attacked the trails with a fury that seared my lungs and strafed my quadriceps and my hamstrings. I beat my way across the snow and the climbs, teeth gritted, snarling and slipping, sometimes spinning in place and then recklessly hurtling downhill once past the apex. For three hours, I burned calories and bridges hoping to put as great a distance between that night and myself as I possibly could. I remember stopping at the crest of one hill, my heart pounding, my chest heaving, nearly every fluid in my body pouring out of my eyes and nose, and thinking that I didn’t want to go back there—not back to Dallas and the scene of the crime and not back home either. I just wanted to ski on forever, stay lost in those woods and mountains, allowing the cold and the wind to numb me past sensibility and reason.
***
December 5, 2009 was the most horrific day of my life. 5, 2009. I wish that I could say that what I experienced in being kidnapped and raped was an isolated incident of random violence. Sadly, the statistics point to a devastating alternate truth: On the day I was raped, 1,870 other people in the United States endured the horror that I did.

In choosing to tell my story, I hope to shatter the silence that often follows attacks like the one I endured. The paralyzing feelings of guilt and shame that accompany being raped last far longer than the assault itself. Just as rapists often tell their victims to shut their mouths, society can do something similar to victims. I hope that by sharing my experiences, I can help others who’ve been raped, as well as their family members, friends, mental health experts and counselors, gain a new and better perspective from someone who was there and is now here. The silence does not have to linger forever. I’m fortunate that I was able to utilize many of the skills and traits that I had developed over the years as a competitive runner to aid my healing.

For those who have struggled with adversity, who have experienced things that they wish they could undo or leave behind, those who are haunted by their past, I am here to say that there is a way through. We will all face it; we will refuse to allow those feelings of guilt and shame to hold us back or to victimize us again. We can use those experiences, as horrible as they might have been, to make us stronger than we ever dreamed possible. I hope that in reading my story you’ll find some keys to unlocking your own strengths and abilities. You may not be a runner like I am, but you can begin to move more freely in your world and in your own way.

I was victimized, but I refuse to be called a victim. I’ve been sad, but I won’t let anyone feel sorry for me anymore. I’ve been raped, but I will never let that define who I am.

Adapted from Kill the Silence: A Survivor’s Life Reclaimed. Copyright 2015 by Monika Kørra. Published by Harmony Books, an imprint of Crown Publishing Group, a division of Penguin Random House LLC, on August 25th.