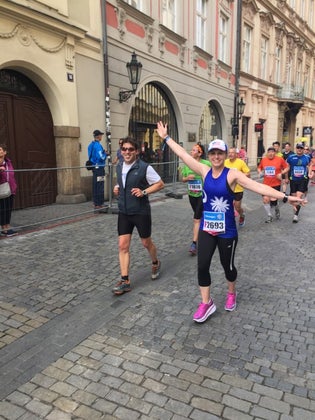 Whether you have ever set foot on foreign soil or not, you may have heard about the world-renowned beauty of Prague, the capitol of the Czech Republic. Prague seems to be the one city everyone can agree on. I’ve never met a person who has visited there and didn’t love it. As someone who counts their two great passions in life as running and travel, getting the opportunity to run the Prague Marathon on May 7, 2017, seemed like a dream come true!

That Sunday, I took my place at the starting line (well, really far away from the starting line, thanks to my lack of speed) with 10,600 other runners, including some of the speediest athletes in the world. The Prague Marathon is the world’s fastest May marathon. Runners come from 88 different countries around the world to compete for its top prize! The race begins in Prague’s stunningly beautiful Old Town, with the sounds of classical music blaring as runners move through the streets. Everyone around me was stunned into silence as we crossed the start line to the cheers of spectators; the magnitude of the moment was not lost on us. Everywhere you look are beautiful old buildings with incredible architectural details and bright colors. To say that the whole race start experience was very “European” is really the only way this American girl can think to describe it.

The Prague Marathon was a goal race for me, but that goal changed over time. I thought I had run my last marathon – my 50th – back in November 2015. Chronic back injuries and ultimately a surgery made training for marathons difficult and ultimately, unenjoyable. But I found myself getting that itch back, slowly but surely. When I found out I could run in Prague (which only has a full marathon in May – the half marathon is in April), I thought, “It’s Prague. I have to at least try.” And so, try I did. I started from square one with my training and gave it 18 weeks. My first goal was to make it to the starting line, which I did. 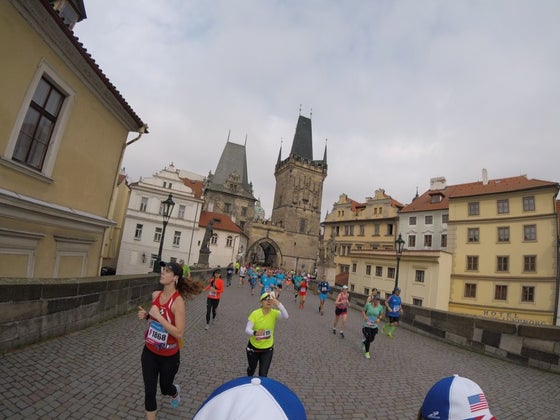 The Prague Marathon course starts out running through the Old Town before crossing the Vltava River on one of the city’s many beautiful bridges. I marveled at seeing runners on the bridges on either side of me, winding their way through the course. About 10 percent of the race is run on the old cobblestone streets. While I had dreaded this aspect of the course, it actually turned out not to be bad, because each of the sections were very short. We ran along the river for several miles before heading back through the Old Town, which was, by that hour, throbbing with cheering spectators. The energy was electric and I felt my pace pick up as my spirits lifted. How bad could another 13.1 miles possibly be?

I got my answer just a few short miles later. After a couple short out and backs, I suddenly felt tingling and numbness in my right leg. This is omething I have experienced off and on for years, but not at all during this training cycle. While I had been prepared for the potential of back pain and of course, for the hurt that comes with any marathon, I was not mentally prepared to lose control over my leg (which was rapidly happening). I felt panic rising in my chest and suddenly felt like I was gasping for air. This couldn’t be happening! Not in my comeback marathon!

Thankfully, I had one of my best friends running alongside me the entire way. She coached me through my fear of not finishing—there were still more than 10 miles left to go at this point—and helped calm me down. I made the decision that I would take a walk break and stretch before deciding how best to continue the race. The tingling and numbness eventually wore off, so I decided to run until my leg started bothering me again. As it turns out, I was able to push myself from water stop to water stop before my leg demanded a break. The routine was the same for the next 10 miles: run/shuffle to the water stop. Ttake a walk and stretch break. Pick running back up until the next stop. 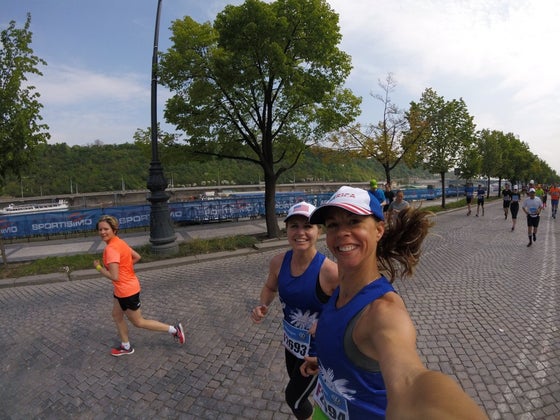 Like any marathon, there were incredible highs and lows. At some points, the distance I had left to go didn’t seem so overwhelming. At others, just a mile later, it felt insurmountable. Still, this was where the rubber met the road. I had worked incredibly hard on improving my mental strength and toughness during this training cycle. While I knew it would be tested, I was anticipating something more along the lines of trying to maintain my goal pace to the finish rather than willing myself to take another step. But hey – marathons are unpredictable, right? I was determined to keep a positive attitude as much as possible and never lose sight of the fact that I was running in such a beautiful place! I mean, if you have to be slogging through a marathon, it might as well be in Prague, right?

Although it seemed like the finish might never arrive, the cheerful buildings of the Old Town and the loud cheers from spectators soon came roaring back. I still couldn’t feel my leg and I wasn’t exactly sure where my foot was landing, but I gave the final kilometer everything I had. I was ready for the pain to be over, but I wasn’t ready to let go of the experience. Crossing the finish line was incredibly sweet. I realized I had just run my sixth fastest marathon ever and my fastest since my back surgery by over 15 minutes! In that moment, I knew just how far I had come—literally and figuratively—and relished that I had made it.

The Prague Marathon was the perfect comeback for me. Between the astounding beauty of the course, the flawless organization by the RunCzech race committee, and the support of the Czech people, it was a race experience I’ll never forget! I fully believe there’s no such thing as a bad marathon when you run it in Prague.