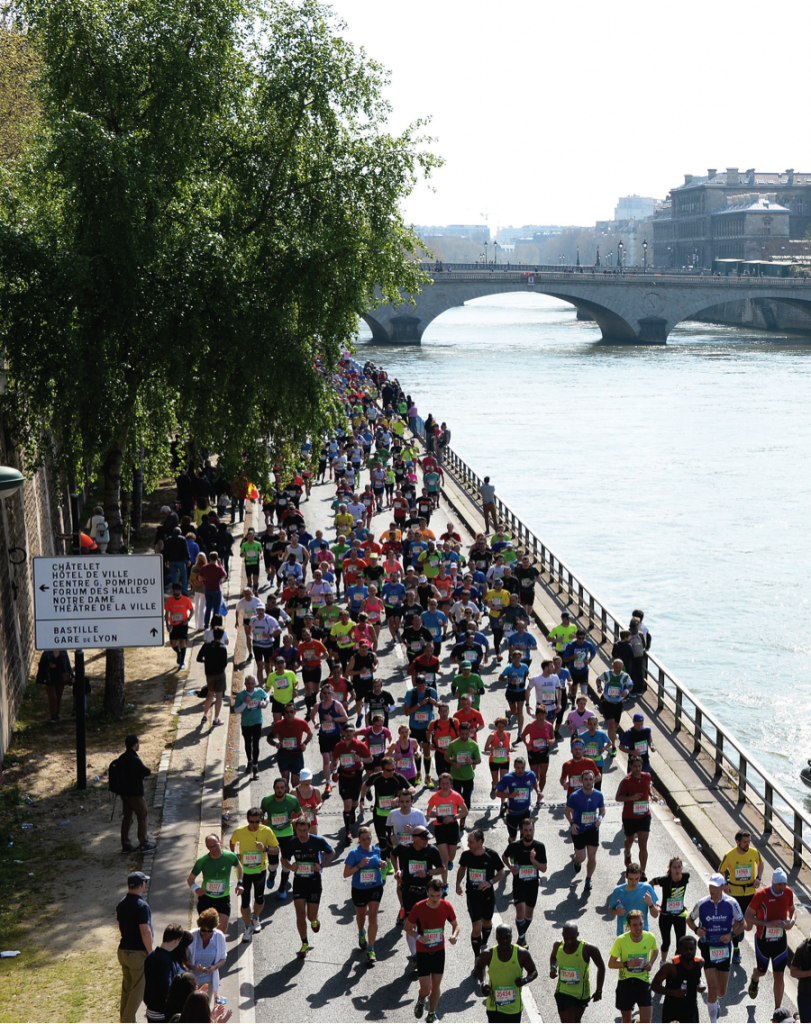 Fabulously rich food, robust wines, beautiful art and a love of leisure—these bastions of French culture make the country an idyllic vacation spot. At last count, its capital city ranked as the fourth most popular travel destination in the world. It may be hard to imagine how the very attributes that serve to create a delightful holiday would mix well with marathon running—a pursuit not known for being particularly delicious, lovely or restful. But through a bit of magie, for one weekend each year, Paris hosts an enormous 26.2-mile race that’s both a high-caliber endurance event and a thoroughly French a air.

LE JOGGING
In 2015, when I was lucky enough to experience all 42.195 kilometers of this delightful race, an astonishing 54,000 runners registered for the Paris Marathon (Marathon de Paris). For more than two hours, a steady stream of racers ran shoulder-to-shoulder through the start line on the Champs-Élysées. The sheer volume of people in wicking shirts was staggering.

While in France, I learned that country’s relationship to running hasn’t always been so amicable. The race through the capital dates back to relatively recent 1977—in contrast, the Boston Marathon’s inaugural run was 1897 and New York’s was 1970. Paris’ first year saw only 78 finishers slog through what must have been some very lonely miles.

Even in the early 21st century, running was still seen as a distinctly American pursuit. You can see this in the language itself. Like le milk-shake or le skateboard, the French translation is le jogging. When Nicolas Sarkozy was elected president in 2007  he was widely criticized for pounding the pavement in public. The left-wing newspaper Libération published a story noting that fitness also happens to be highly valued by totalitarian regimes. Philosopher Alain Finkielkraut argued, “I would rather see the president in his suit than in his sweat,” adding that Sarkozy should slow down to a walk. “Western civilization, in its best sense, was born with the promenade.”

In the last few years, the tide has shifted and running has become increasingly popular. In fact, I noticed a number of running shops across the city, and officials from the marathon say that race registration numbers have grown every single year for the last decade.

THOROUGHLY FRENCH
France’s historical hesitance to embrace the sport, in my experience, made the marathon all the more special. Because big-city races are an American phenomenon, when hosted abroad, they can feel a little bit like going to Starbucks. The currency will be new and the baked goods might taste different, but you’re effectively ordering the same drink.

Not so for the Paris Marathon. From the moment I woke up to the second I stumbled back onto my hotel bed, I felt French culture with every single step. The first evidence: My pre-race goodie bag came with two sponges to use to cool down on-course, a chic little plastic vest (I assume to keep runners warm at the start line?) and a few packets of Haribo candies that stood in the place of usual race nutrition. The gun time, a leisurely 10 a.m. for my corral, was a blessing, especially since I had fueled the night before in true Parisian fashion: escargot, côte de boeuf, duck fat potatoes and a carafe of vin de maison.

OH CHAMPS-ÉLYSÉES
Thankfully, the remarkable beauty of the marathon course is enough to distract from even the very worst fueling decisions. The start line alone felt like the beginning of a special city tour. Everyone gathers at the foot of the Arc de Triomphe and waits patiently on Paris’ most famous avenue. Within the first mile, racers sweep by the Place de la Concorde—the central square where Marie Antoinette and Louis XVI suffered the guillotine—just before passing Mona Lisa’s home, marked by the Louvre’s lovely glass pyramid on the right.

After a quick turnaround at the Place de la Bastille, where the famously stormed prison once stood, runners head to the Bois de Vincennes, Paris’ version of Central Park. Shaded paths offer relief from the late-morning heat—and I spotted a few mountain goats in the distance watching the race from the zoo.

While you’ve already seen a number of famous buildings by the halfway point, like a well-constructed symphony, the marathon’s course continues to crescendo. Miles 15 through 20 snake along the river Seine. As the markers tick by, so do the sights. First the Notre Dame Cathedral, the Musée d’Orsay, the Grand Palais, then—wait for it—the Eiffel Tower, standing sharply striking in the bright blue sky.

FARM TO FUELING
France is famous for its well-crafted delicacies and aversion to big-box supermarkets stocked with “industrial food.” It should have been no surprise then that the aid stations at the race are light in the way of American-standard packaged gels and chews. Cups of Powerade and manufactured “fruit boosts” from the Swiss brand Isostar are offered on course, but the vast majority of fueling options are natural.

Dried apricots, nuts, sugar cubes, raisins, apples and orange slices line the tables for runners to keep their energy up. I must admit, the thought of fibrous fruit mid-race didn’t sound appealing to my beef-laden belly, and the fact that the troughs of raisins had been raked through by hundreds of sweaty hands made them even less so. Still, the idea of unprocessed, package-free fueling is a noble one, and it was fun to see runners less uptight than me stuff a dozen apricots down their race shorts for safe keeping.

HOME STRETCH
The final leg of any marathon is rough, but Paris does its best to ease the pain. Just after the 20th mile, the race erects a big faux-brick sign accompanied by a light display to mark “the wall.” Now that it’s well into the afternoon, citizens are out and about, lining the streets and yelling encouraging shouts of “Allez, allez!” Although it’s probably a wash for Europeans, I found the kilometer markings especially helpful during the final push of the race. As you race through the park Bois de Boulogne, it’s nice to sever the marathon into manageable 1,000- meter chunks.

After a long, winding stretch through the woods, the Arc de Triomphe suddenly reemerges, and like magic you’re back to where you started the day. Packed with happy racers, the finish line is a spectacular sight, and the golden medal, the most beautiful I’ve ever received, feels like a fitting marker of the elegant adventure.

In Town For The NYC Marathon? Check Out These Free Activities.

Become a Six-Star Marathoner While Traveling the World