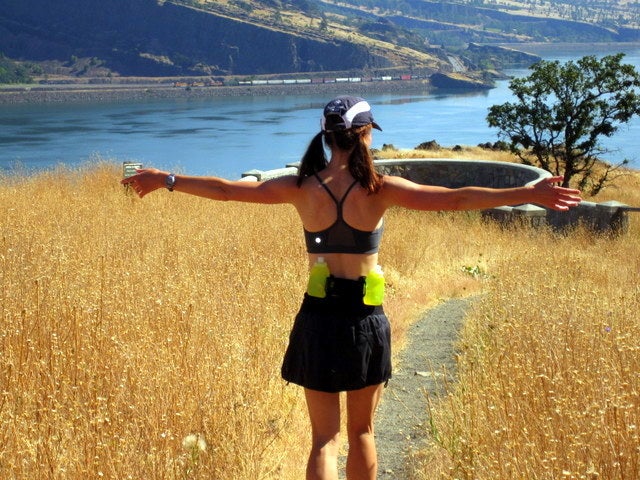 My journey into marathon running began with a broken heart and a dying cactus. This was no ordinary cactus. This was Granddaddy—the oldest, largest saguaro in the country. For 300 years, Granddaddy stood tall in the Sonoran Desert, just outside of Tucson; however, in December 1992, it lost the first of its 52 arms, the beginning of its end. In spring 1993, my boyfriend and I, both avid hikers, decided to road-trip from Tennessee to Arizona to photograph this legend before it fell apart. Despite trekking deep into the saguaro wilderness over two days, we never found it. We veered off track. We ran out of time.

What we did discover was that our two-year relationship, like the afflicted cactus, had been eroding for months. At home, I didn’t realize how far we’d grown apart—there were always so many distractions. But in the quiet of the desert, I felt painfully disconnected from the man I loved. We’d been hiding our wounds for too long. Silence had become our pattern and ultimately, it’s what destroyed us. Soon after we got back to Tennessee, our relationship crumbled.

At age 25, this was my first real heartbreak and while I tried to move on, my entire being ached relentlessly, interminably. I couldn’t eat. I couldn’t breathe. I dropped out of grad school. Late nights with books became late nights in bars. I started smoking. I got addicted. I worked in a backpacking store in Nashville, but unlike its customers, I wasn’t going anywhere.

One day at work, I was carrying some kayak paddles over one shoulder through the fly fishing section when I turned too sharply and clipped a free-standing rack of fly rods. The rods came crashing down like a game of pick-up sticks—except these were very expensive sticks and they didn’t all land in one piece. As I stood with my oars among the splayed sticks, the empathetic store owner told me not to worry, that all would be okay. Would it? I tried to fight back the tears but it was no use—it never is—so I fled to the stockroom where I sank into a pile of sleeping bags and sobbed.

About five months later, I curled up on a twin bed in a dorm room, but I wasn’t back in school, yet. It was 9 p.m. My alarm was set for 5 a.m. I pulled out a letter from my suitcase that Robert had written me earlier that week: “Dear Catherine, You’re ready. You can do this.” There was more, but that’s all I needed.

My friend Robert, whom I’d known for about a year, owned Team Nashville, a running store located around the corner from the backpacking shop. Several days after I’d swatted the fly rods, I visited him because I needed running shoes. Despite my heavy partying, I still jogged a few miles several times a week—a habit I’d started in high school to burn calories and continued through grad school to burn stress. While I never ran fast or far, running was one of the few things in my life that still clicked.

While trying on shoes, I overheard Robert talking to a young woman about marathon training. Apparently he was coaching her because they discussed her running schedule. I knew of marathons; I knew they were 26.2 miles, but that was about it. This was before the internet was in our homes, before the hashtag #marathon, before the distance was as popular as it is today.

That afternoon, I laced up my new running shoes and drove to my favorite running spot, Radnor Lake, a natural area nestled in the city about four miles from my apartment. I took off down a paved path under a winter canopy of bare branches that let the sun flash through on my face. I needed the sun. Usually I ran 3 miles, but that day, I didn’t want to stop. I ran out of the park into the surrounding hills for another 15 minutes, the farthest I’d ever gone. I don’t remember exactly how that turned into I want to run 26.2 miles, but before long, I was back in the running store asking Robert if someone like me could do such a thing.

“Why do you want to run a marathon?” he asked.

It was a good question for which I didn’t have a simple answer. In a roundabout way, I explained that I needed to get unstuck.

Robert understood. He’d been there with his own struggles as an overweight teenager. His father died young of heart disease; Robert didn’t want to suffer the same fate. In college, he changed his diet, started running, and got hooked. Now in his 30s, he was a lean 2:50 marathoner, but more importantly, he felt good.

“How much are you running now?” Robert asked.

“Well, you can train for a marathon, but there’s not a snowball’s chance in hell you’ll finish unless you quit smoking.”

Back at my apartment, I dumped my remaining packs of cigarettes onto my desk and taped 26 of them to the wall in two tidy rows. It was my anti-vision board. I told myself that if I took one off, I’d sabotage my race.

The following Monday, and every Monday for the next 20 weeks, I stopped by the running store where Robert and I made an exchange: 10 bucks for a white envelope. Inside the envelope was the week’s training plan, which included a short motivational letter. Over time, this ritual sparked new patterns: I went to bed early so I could log my miles before work; I cooked more because I craved healthy food; I read more because I was at home more. The more I ran, the less I craved nicotine. My heart still hurt, but I no longer wanted to hurt myself. My coach was shaping my runs; running was shaping me.

Despite my steady progress, the first few weeks without smoking were a bitch, so I ate instead—pints-at-a-time of various flavors of Ben and Jerry’s ice cream. I gained a few pounds, but whatever, I thought. It’s better than smoking. Running five days a week was also grueling at first, but once I could run to Radnor Lake instead of driving there, my newfound strength motivated me to keep pushing ahead.

After gradually working up to 45 miles a week, it was time to fly. I boarded a plane for Duluth, Minn., where I bunked in a dorm at the University of Minnesota Duluth, an affordable lodging option provided by Grandma’s Marathon. I chose Grandma’s because it worked with our timeframe and was known to be a beautiful course, rolling alongside Lake Superior from Two Harbors to Duluth.

On marathon morning, June 18, 1994, I woke up well-rested, but anxious. My thoughts began to spiral: What if I get a migraine. What if I don’t finish. Omigod, why am I doing this? To calm myself, I took several deep breaths and wrote in my journal until it was time to go.

It was sunny and 60 degrees at the start, warmer than I’d hoped, but I’d been training in the South, so I wasn’t too concerned. I took off a little too fast, swept up in the adrenaline of some 4,300 other marathoners, but after the first mile, I settled into my natural rhythm and cruised comfortably, soaking up the stunning North Shore scenery—until wham! I slammed into the notorious wall at mile 20.

Now I was a box turtle, hunched over, inching along under the blazing sun as if I were back in the desert with blistered toes and a sinking heart. Dear God, how am I going to finish this thing, I thought. That’s when I remembered Robert’s advice: focus on the mile you’re in—good advice for racing and otherwise. The strategy worked. With tears of joy and terrible form, I crossed the finish line in 4 hours and 38 minutes.

The next day, with impossibly sore legs, I flew back to Nashville. My first call was to Robert, who was, of course, proud of me, happy for me. But what now? What would I do without our Monday meetings? Without the envelopes?

That evening, as I unceremoniously peeled the cigarettes off the wall and tossed them into the trash, I couldn’t yet see that while I’d been training, I’d created my own ritual with ink on paper. Each morning before running, I’d write in my journal. Like running, writing was therapeutic. It’s how I figured things out, found clarity in the midst of chaos. Before long, writing and running became inextricably linked, taking me in new directions: to a new graduate program, to working as a writer, to Oregon—my new home. Writing and running fed each other. They grew together. They threaded through my days, shaping them, shaping me—bringing me to the very mile I’m in.

Cate Hotchkiss is a freelance writer who lives in Hood River, Oregon with her husband and two children. She’s run seven marathons and counting…

Who Gets The Running Group In The Break Up?

How Training For A Marathon Helps Deal With Heartbreak