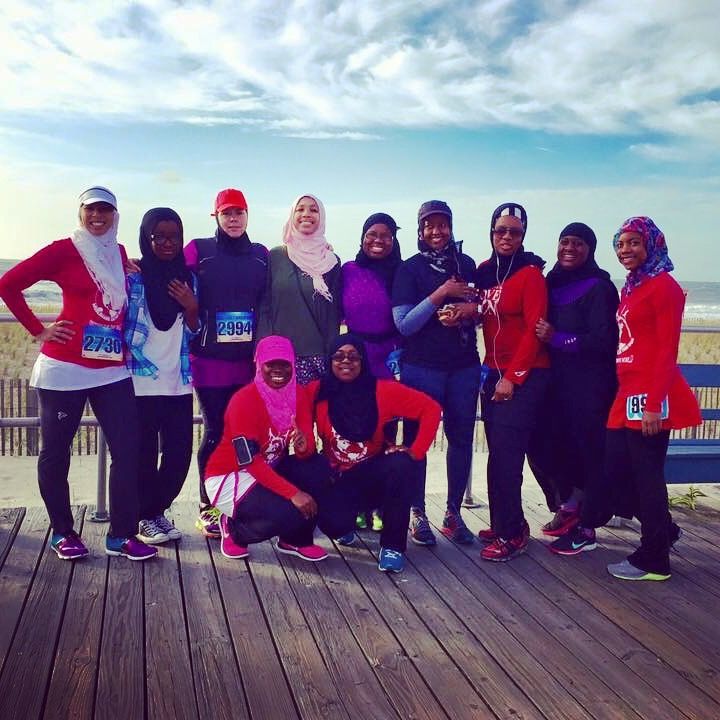 Muslimahs On The Run

When Monica Wallace leads a run with Muslimahs on the Run, she relishes the laughs, conversation and sweaty camaraderie that she’s fostered since starting the group in December 2013.

But sometimes, she and the other women also revel in the silence that comes with not having to explain their modest clothing or their mid-run prayer stops to curious runners from outside the faith.

“When you’re in a Muslim group, you can be transparent and not feel judged or that you have to explain yourself to people—we stop to pray because that’s what we do,” says Wallace, a healthcare consultant who lives in Cary, N.C., about 12 miles west of the capital city of Raleigh.

Wallace and more than 200 women across five chapters—Detroit, Philadelphia, Raleigh, Atlanta and a new one in London—meet up for runs anywhere between once and a few times a week, keeping in touch with other Muslimah members nationwide on Facebook until their annual national meetup, when they fit in runs in between attending a modest sportswear fashion show and private dance classes. But Wallace says that even the women who can’t make the meetup benefit from the sense of kinship that comes from seeing their reflections in the group’s members on social media.

“We have a lot of women where maybe they’re the only [Muslim or hijabi] woman running in their little town, so they rely on the virtual interaction through social media,” she says. “I really think we’ve given other Muslim women who just desire to get out and take charge of their health the ability to do that.”

The road to running wasn’t easy for everyone in the group, including Wallace, who started running in 2012 to lose weight and combat obesity-related diabetes. When she visited mosques to recruit for the group after being inspired by Black Girls Run, she said many Muslim women she encountered were worried about joining and the logistics of what they’d wear. But within a year, Wallace had rallied a group of hijabi and non-hijabi runners and walkers—along with some who wear the niqab, a full facial veil, and the abiyah, an accompanying loose full-body garment—in the four national chapters, welcoming Muslim women from all cultures and normalizing the women’s participation in the sport, according to one member.

“When I stumbled upon Muslimahs on the Run, it truly embodied ‘come as you are,’ everyone is welcome. It gives people a kind of confidence,” says Emily Sutcliffe, a cultural anthropologist in New Jersey who joined the group in 2014 and has since run a marathon and 15 half marathons. “There are thousands of us doing this—we’re trying to show the world that we’re normal, like you, and we can do hard things.”

Wallace, who’s run two marathons and plans to run 15 more half marathons within the next two years to finish her goal of running 50 races by her 50th birthday, says she plans to continue to grow the group until there’s a chapter for every Muslim woman. “My dream would really be for any Muslim woman who wants to get out there and get fit to have a safe place to do that, regardless of where they are in the world.”

What Fasting During Ramadan Looks Like For A Runner