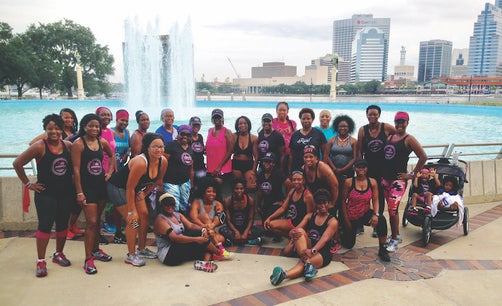 Go for a run with Adina Crawford, and she’ll promise to stay by your side, no matter what pace you’re running. And she’ll stick to her word. “It’s hard to get rid of me,” jokes Crawford,  a Washington, D.C., ambassador for Black Girls RUN! “If you want to walk, I’ll walk. Crawl if you have to. The last thing I want is for someone to be out there feeling alone.”

It’s this message of “no woman left behind” that defines Black Girls RUN! (BGR), a community of more than 225,000 members across the country. Born out of a desire to offer a welcoming environment for all runners—African-American women, especially—BGR has grown from a fledgling Facebook group to a powerful movement in just nine years. And it’s not just about running together: BGR is also focused on reducing the rising rates of chronic obesity among African-American women, one mile at a time.

“I do think we’ve galvanized black women to think about their health in ways they haven’t before,” says BGR co-founder Toni Carey*, explaining that some 80 percent of African-American women are overweight, according to the Centers for Disease Control. “I’m so proud of all of these women who are owning our message and improving their own lives and the lives of others.”

Carey and co-founder Ashley Hicks-Rocha formed BGR in 2009 after they themselves felt ostracized at a group run in Charlotte, N.C. “We weren’t acknowledged; they took off and we were on our own,” Carey recalls. “It was such a terrible experience. I never want any other runner to ever feel like they don’t belong out there.”

Today, with nearly 70 chapters across the United States, BGR offers national meet-ups at major events like marathons as well as regular runs among the local crews. There, ambassadors like Crawford divvy up the groups to ensure that every member has someone to keep pace with. And they extend their inclusivity beyond the weekly runs. “If a member is running a race, we’ll be sure to have someone there for her and to be at the finish line when they cross,” explains Crawford. “Whatever their goal is, we will carry it through.”

Crawford says she’s seen women who had never run more than a few miles become marathoners, and those who once considered themselves “too fat and too slow” discover soaring self-confidence through running. “They’re starting at zero, and we’re giving them a foundation on which to build,” she says. “To watch that progress is so rewarding.”

Granted, Carey admits that BGR still has plenty of building left to do. “We’ve had a tremendous impact so far, but the reality is that the obesity rates among black women aren’t declining,” she explains. “We are hoping to make generational changes—that women will pass on their healthy lifestyles and love of running to their kids and beyond that, and we’ll continue to make a difference down the road. That will be our legacy.”

*Editor’s Note: At the time of this story’s online publication, Toni Carey was no longer with Black Girls RUN!. The national running organization is now operating under its new CEO and owner Jay Ell Alexander.