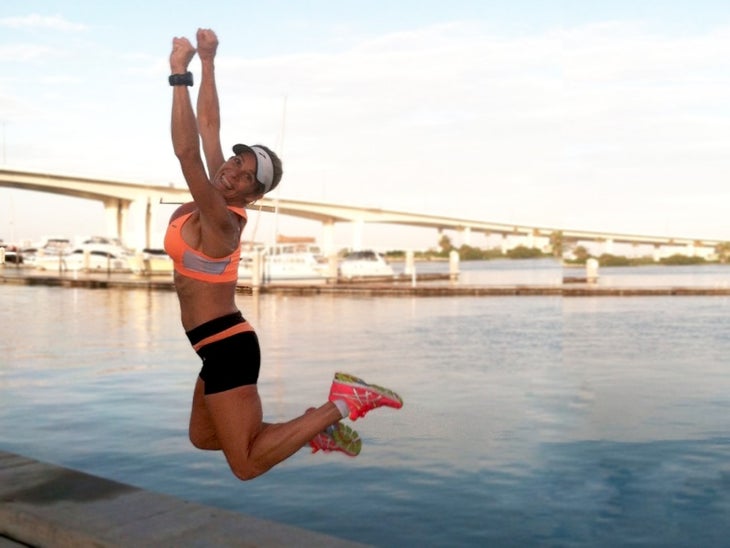 Throughout her life, Kristina Lindblad has watched countless friends and family members battle various forms of cancer. From as young as seven, she remembers watching her mother support friends fighting the disease.

Her stepfather, who raised her and her sister, was diagnosed with stage four lymphoma when Kristina was in her 20s—and went on to beat the odds and fight his way to remission. But a few years later, cancer struck again—this time, it was lung cancer. Four days before his 67th birthday, he sadly lost his battle.

As she grew up, doing everything she could to combat cancer became a personal crusade for Kristina. She quickly realized with all the various charity races out there that running could help accomplish more than just staying in shape. It was a great way to keep herself fit while raising awareness and funds for each of the different cancers that had impacted her loved ones’ lives. Along with her sister, she raced to raise money for breast cancer, lymphoma and several other diseases.

But there was one glaring omission—there were no races that fundraised for lung cancer, the illness that had claimed her stepfather’s life.

“The stigma surrounding lung cancer—that it’s something they brought on themselves by smoking—meant there were no races to run,” she explained.

So, when she decided to run the Rock ‘n’ Roll Marathon in her hometown of Virginia Beach, she was ecstatic when she reached the registration page. Instead of having one dedicated charity, she had the option to sign up with everydayhero and fundraise for the cause that meant the most to her.

Instead of fundraising for just one kind of cancer, though, she decided instead to help the families of cancer patients who were feeling its impact, conscious that many families struggled financially during and after treatment. Consequently, she selected the Cancer Care Foundation of Tidewater as the cause she was going to support and created her everydayhero fundraising page.

“People don’t understand how challenging it can be for a family facing these kinds of medical bills,” she said. “We were fortunate and had good insurance—but not every family has the money needed for treatment.”

The Cancer Care Foundation of Tidewater also happens to help those in the Virginia Beach area, Kristina’s hometown, so she is proud to have helped an organization that provides services directly to the people she knows and loves.

“Helping a hometown charity hits a lot closer for me because I was born and raised in Virginia Beach,” she said. “So many of the people I know that have been afflicted with cancer are from the area, so I know it’s helping them.”

everydayhero is a platform that is transforming how people give to the causes they care about most and is official fundraising partner to more than 18 events in the Rock ‘n’ Roll Marathon Series. We believe far more goes into giving than just money so we enable everyday people to see and track the real impact the time, effort, voice and money they give to charity has on their personal Giving Footprint™. Designed to enrich the giving experience and make it more meaningful, The Giving Footprint™ provides real-time and ongoing feedback and acknowledgement to those supporting charity, inside their everydayhero account, so they can see the real difference their actions and efforts are making.