The passing of Sarah, aka Sahara, the cheetah at the Cincinnati Zoo last week brings back some special memories with speedy cats. 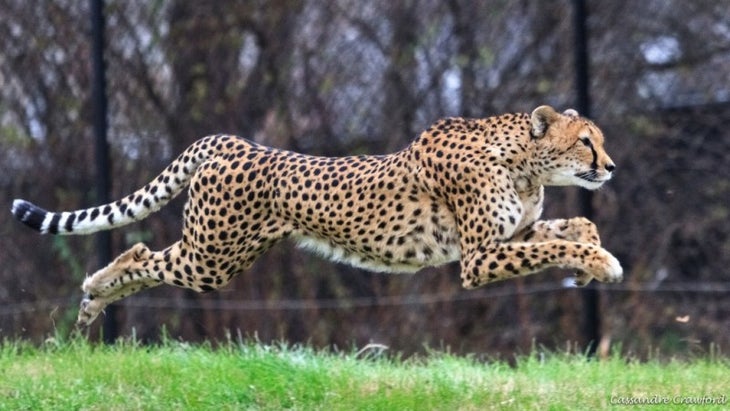 Cheetahs are widely praised as the fastest land animals, which perhaps contributes to the awe and admiration I’ve long had for these big cats. Ten years ago, I went on a cheetah safari in South Africa, which included a visit to a conservation facility—whether we’d see any cheetahs in the wild wasn’t guaranteed, but we lucked out by seeing three brothers washing up after a kill.

It wasn’t until I visited the San Diego Zoo Safari Park that I saw a cheetah sprinting in front of my bare eyes. They have a run set up for visitors to watch a daily afternoon dash. It’s so quick, you definitely have to pay close attention. These beautiful, spotted creatures are sleek as the jet along the earth, using their tails for balance.

My house cats have been pretty good runners from one room to another, but, like people, a couple of them have had better form than others. Parker is a hurdler, whether she’s jumping over the corner of the couch on her way to the kitchen at feeding times or bounding over another cat for a little playtime enticement.

Murphy’s most memorable runs were as a kitten when he’d grab the end of the toilet paper and race downstairs and into the living room—obviously attempting to see how far he could get before the roll would break off. He would also run up one side of me and down the other—until he became too big for me to tolerate the accompanying claw action.

Sometimes when I’m on a run, it feels like my cats who’ve passed could be running alongside me, effortlessly bounding along. It’s amazing how easy it seems for cats to run, whether it’s in the house or at the zoo. And when they aren’t running, they are super snoozers. It’s a life worthy of appreciation.

Kudos to Sarah for showing us her top speed: 100 meters in 5.95 seconds. (For comparison: Usain Bolt’s record is 9.58 seconds and Florence Griffith-Joyner’s is 10.49 seconds.) Between heavenly catnaps, perhaps she’ll join me at my next track workout.