An Injury Is A Runner’s Ultimate Heartbreak

The only way you’ll fail is if you fail to try.

That’s the lesson I learned after my first attempt to take what felt like an impossible goal of qualifying for the Boston Marathon and make it a reality. For six months, I fought through self-imposed limits, doubt and a fear of failure. With a lot of help from sports psychology wizard Dr. Robert Corb (aka Dr. Bob), I learned the real definitions of success and failure. Thanks to the wisdom of my coach Josh and that of Dr. Bob, even though I didn’t cross the finish line with a BQ, I felt like I had won. 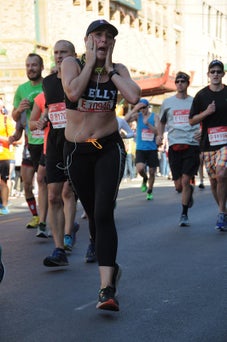 Gearing up for my second attempt at nabbing a BQ, everything was different. There wasn’t a doubt in my mind that I couldn’t make it happen. I knew what I was capable of and, despite knowing how hard the training would be, I was ready to make my impossible possible.

Then, about a month before my second attempt, my piriformis muscle acted up and everything I’d worked for slipped through my fingers.

For the first time in my life, running broke my heart.

I wasn’t very active growing up and I didn’t play on any organized sports teams. Until I turned 24 and found myself depressed, lost, grief-stricken and desperate enough to find a way to feel proud of myself, being physically active was a miserable means to an end. It was what I thought I had to suffer through to lose weight so that I could see myself as beautiful.

Becoming a runner changed my life. It taught me what strength, beauty, ambition and drive actually looked and felt like. It showed me how often I gave in to fear of failure or listened to that voice in the back of my head that filled me with doubt. It taught me how important it is to challenge myself and step outside my comfort zone to live the life I deserve to be living instead of the one I’ve convinced myself is just good enough. But it doesn’t matter how hard I work or how many marathons I run: running never seems to get any easier. And that’s why I love it.

Related: Run The Mile You’re In, No Matter What

But I’d be lying if I didn’t admit that these past five months have been hard. For the first time in my life, I found a way to believe in myself, do the work and admit how badly I wanted to make my BQ a reality. I gave everything I had, ran with joy and gratitude every single step of the way and still ended up crashing and burning.

It sounds so silly to say that running broke my heart, but it did.

I’ve spent the last five months struggling to get out the door. I’d head out for a short, easy run and feel like there were sandbags strapped to my feet. For the first time since my first few months as a new runner, I found myself crying on street corners because I was still 2 miles away from home.

I missed having fun on the run. I missed the feeling of accomplishment I got after a really intimidating workout. And I missed being able to unplug and run like hell after a really shitty day.

I knew that the only thing I could do was wait patiently for the fog to dissipate. But it’s been tough.

A lot of people have asked me why I didn’t just stop running. I don’t have to explain to you why I didn’t stop. I can’t not run. Even the shittiest run, as horrible as it is to get through, makes me feel like me. I love how hard running is. And sure, I definitely cut back on how often I ran, but I couldn’t simply stop. Even though the last five months have been anything but fun, I’m really grateful that I gave myself time to patiently fight my way through the fog.

Bouncing back after heartbreak, setbacks or perceived failure takes time. I won’t sit here and say that I’m immensely grateful for the lessons I’ve learned from crashing and burning during the London Marathon. If I could go back in time and prevent my piriformis muscle from blowing up, I would. But I can say that I am grateful for the perspective the disappointment brought me.

It isn’t easy to give yourself permission to hurt. We’re taught that we aren’t allowed to take our armour off or put on anything other than our brave faces. But we have to. Sometimes things don’t go your way. Sometimes you won’t get the day you worked for. It’s okay to be sad, angry, frustrated or heartbroken when it happens. It’s impossible to give everything you have and not feel heartbroken when you don’t get the day you worked for.

It’s just not okay to give up. Giving up will always be an option. And when you’re hurting, it’s going to seem like a smarter, safer, more plausible option.

Don’t give up. Just give yourself time.

I knew the day would come when the butterflies in my belly would come back whenever I thought about my impossible goal. They may have taken five months to find their way back to me, but they’re finally here.

I still believe that the only way you’ll fail is if you fail to try. Just remember: if you’re brave enough to set out to make the impossible possible, you’re going to experience failure along the way. The more you want something, the worse it will hurt when you fall on your face. But after spending five months questioning if the pain and heartache is worth it, I’ve come to the conclusion that it absolutely is. I’d much rather live through a million heartbreaks than live my life too afraid to step outside my comfort zone.

Dare to fail, my friends. You can do anything you set your mind to if you’re patient and persistent enough.

BQ or Bust take three. This time, I know that some smiles are earned.

I can and I will. 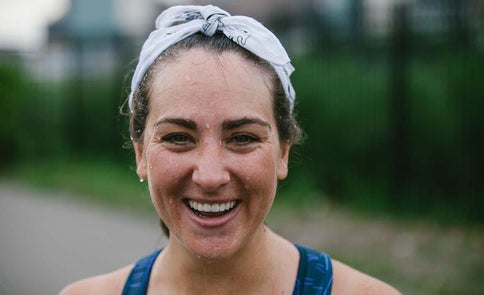 Quitting Is Always An Option–But So Is Going Forward

5 Things I Wish I Knew Before My First Ultra