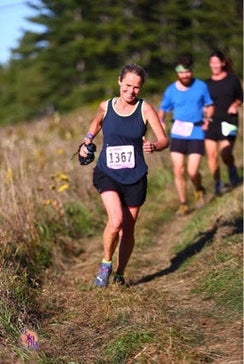 Around The World In 7 Days

Her list of accomplishments includes four consecutive Boston Marathons, 50K and 50-mile trail races and even a 100-mile race. Her next undertaking will be even more ambitious.

DeMarsh will tackle the World Marathon Challenge: Seven marathons, in seven days, on all seven continents.

The clock starts on January 30, when DeMarsh and 54 other runners, from 11 different countries, begin their first marathon in Antarctica. From that point, they will have seven days to complete marathons in Novo (Antarctica), Cape Town (Africa), Perth (Australia), Dubai (Asia), Lisbon (Europe), Cartagena (South America) and Miami (North America).

When DeMarsh first heard about the World Marathon Challenge, she was skeptical. “I did not think it would ever be something that was financially or logistically possible for me,” DeMarsh explained. “But then last year, I heard a podcast with Ryan Hall, who did the challenge for charity, and I was inspired.”

DeMarsh, an elementary school physical education teacher in Carver, Mass., was motivated to complete the challenge to raise money for the children in her life. In addition to teaching, DeMarsh coaches several soccer teams, serves as a mentor through the Big Brothers Big Sisters of Cape Cod and the Islands program, and even started an after school running club at Carver Elementary School.

“I registered for the challenge, and the kids immediately started raising money with a coin drive. That is when I realized, Wow, I really have to make this happen. I want them to see that even seemingly unattainable goals can be achieved through hard work, determination and a healthy lifestyle,” DeMarsh said.

All World Marathon Challenge runners are required to raise €36,000 for their entry. As is her nature, DeMarsh opted to raise even more. She set a goal to obtain an additional $50,000, $25,000 of which she plans to donate to Big Brothers Big Sisters and $25,000 of which will go to reconstruct the running trail at the elementary school where she works.

“I believe that both the Big Brothers Big Sisters program and the running club provide kids with opportunities to connect with caring adults from their community and school while exposing them to experiences that increase their confidence and pride in their accomplishments,” DeMarsh said.

Her students and “little sister” will track her journey around the world, using Skype and various social media outlets. Knowing that they will be cheering her on from afar makes DeMarsh feel additional pressure, but in a good way.

“The biggest thing for me is going to be not pushing any race too hard and injuring something. I [don’t] plan to run this like a regular marathon at all,” DeMarsh said. Instead, she aims to run each marathon in 4:15:00, 30 minutes slower than her current average marathon time. “It would be nice if I were consistent across all of the marathons,” she added.

Based on her training, this should be a realistic goal. DeMarsh officially started training last July, when she completed a 50K. In November, her monthly mileage peaked at 275 miles, as she logged back-to-back 10-, 10-, 20-, 20- and 20-mile runs. “I was surprised that all of those 20-mile runs were in the same time range,” DeMarsh said. However, she is not concerned about whether she will be able to run all seven marathons that consistently.

Instead, she’s worried about nutrition. DeMarsh, who has adhered to a strict plant-based diet for the past five years, explained that consuming enough calories is going to be tricky (though she is not adverse to eating “bad” vegan foods such as soda, chips and Oreos along the race courses).

An additional challenge for DeMarsh is that she does not enjoy flying. The flight to South Africa, where the group will convene before flying to Antarctica, will be the farthest she has ever flown. In fact, DeMarsh will spend approximately 48 hours, of the 168 hours that week, on charter airplanes.

“I’m hoping it will get easier for me to fly as the challenge progresses,” she explained.

Despite her concerns, she is thrilled to travel to all new locations, and she is looking forward to the final marathon in Miami. Back on home turf, DeMarsh will have family, including both of her daughters, and friends, including her former high school teacher, there for support.

“I remember being inspired by my teacher when he completed the Appalachian Trail, so it means a lot that he will be there,” she said.

As the race approaches, DeMarsh will spend the final weeks fundraising, ironing out race logistics and getting excited for her trip around the world.

“I really don’t think that I will one-up this ever,” DeMarsh said. “This is definitely a once in a lifetime thing.”

To learn more about Renee DeMarsh and her campaign for the World Marathon Challenge, visit her website.

The 10 Rules Of Proper Marathon Fueling