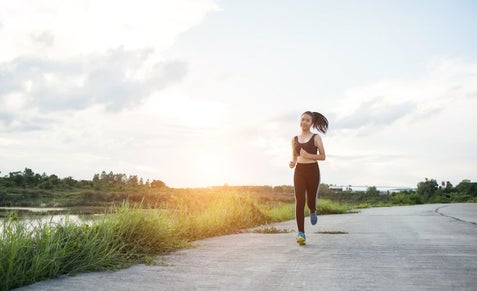 A lot of runners run without music. A small part of me admires them, but mostly I feel sorry for them, for what they are missing out on.

In my early 30s as a single mom of two, I really enjoyed walking, both for exercise and to unwind; to think about life and plan for the future. Not having much time to myself, I often walked around the perimeter of the park when the kids were doing their own “exercising” on the playground. One evening while on such a walk, the perfect mix of a stressful day at work, an autumn breeze and listening to a song on my Sony Walkman that I really liked resulted in me picking up my pace. So, when the song ended and I realized that I had actually been running—about 3 full minutes—I was in disbelief, unsure of what this meant, as I had always been “anti-running,” thinking it a waste of a good walk and too much effort and sweat. (I’m pretty sure that the last time I had put in the effort was for a physical fitness test in sixth grade, and I clearly remember it ending with hyperventilation and dropping to my knees).

As running became an important part of my life, my mixed tapes were an integral part of my newfound love for running. Slow introspective warm-up songs, songs that brought back memories of good times and those that re-opened wounds not yet healed, all pushed me to move forward, in more ways than one.

Over time, the length of my runs and my playlists increased from minutes to hours. With the onset of digital music, my iTunes library filled with playlists that memorialized certain aspects of my life. These carefully-curated playlists held visceral reminders of failed relationships and of new beginnings. They helped me get through stressful life events like breakups and loss as well as celebratory occasions such as new jobs and a new marriage. Not only did running and the songs I chose help me through the mental strain of life, they helped me push through physical pain. (I even made a special playlist to listen to during labor contractions!) My playlists induced muscle memory, bolstering my mental fortitude as I used the carefully-timed music to prepare for and complete races at targeted paces.

Years later, when my youngest child was 9 and wanted to run a race with me, I implemented a run/walk program with him, which was similar to the methods I used when I first started running. My son and I abandoned music and playlists, however, and replaced them with conversation. We would routinely talk the entire length of a 2-mile run (he talked the majority of the time while I listened, learning about superheroes, what his best friends were doing and interesting third-grader insights on life). When my son was ready to do his first 5K, I took him out on a practice run along the race route. Less than halfway through our run, he had a bit of a meltdown, saying he couldn’t go on and started to walk. I immediately began singing songs to him and encouraged (begged) him to keep going—not only because I knew he could do it but also because our car was parked more than a mile away!

Wondering what I would do if this happened during the race, a lightbulb went off: He needed a playlist! We went home and created a 30-minute playlist filled with songs we both liked, the last one being “Life is a Highway” from his favorite movie Cars. On race day, my son and I queued up our iPods and, as the starting gun went off, hit “start” at the same time. We ran together, smiling (mostly) through the entire course. When he saw the finish line up ahead, I told him to skip to the final song, something I still do in the last two minutes of every race. He had more energy than he thought he had left at that point and, encouraged by the sound of his final song, he sprinted to the finish. My son was beaming as he gave me a high five when I finished, proudly rubbing it in that he beat me by 10 seconds.

I can still recall the names of many of my older playlists. When I hear certain songs, no matter where I am, I remember key times in certain races, be it a 5K or a marathon, where the song helped me keep going and even sometimes made me breathlessly sing out loud.

When I hear people say, “I wish I could run, but don’t think I can do it,” I tell them, “Just pick out a few songs that you love to hear and run for part of each of them.” It really is that easy.

Lately, I’ve been reminiscing about my early running days and what led me to me start this “new chapter” in my running life, as I am currently amid a 334-day running streak. I would not have believed a streak that long was possible when I set out to better my previous streak of three consecutive days (not kidding). I think about my running life, the streak and what keeps me going day after day—but as one country group sings on my latest playlist, “That’s a song for another time.”

10 Songs With Lyrics Perfect For Runners

The Power Of The Playlist