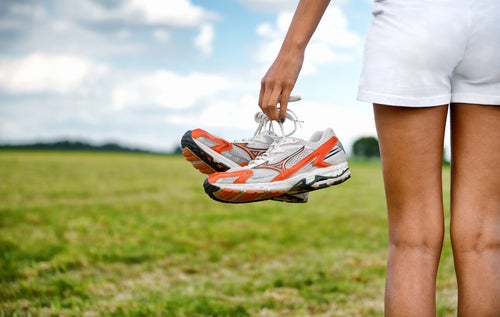 “Do I have to wear these?” I whined as I pulled on my slim red Nike spikes 10 minutes before the 800-meter prelims. Intermittent storms kept turning the sky over the Indiana University-Purdue University Indianapolis track the color of cornflower and smoke.

I was new to competitive running as a freshman in college. An English major with flatter-than-flat feet, I began training with my shoes off a few times each week as a reprieve from the heeled and weighted shoes that I wore to ratchet up my nonexistent arches. I also hated running.

Related: How Running Barefoot on the Beach Benefits You

Another coach might have told me to get over it. Coach Neal Butler was certainly not above that when the situation warranted it, but this time he said, “I’ll ask.”

A few minutes later, he jogged over to where I was stretching on the red Mondo surface.

“Go ahead,” he told me. I stared at him incredulously. “The officials had to look it up in the rule book, but it’s the very first thing in there. You don’t have to wear shoes!”

Ecstatic, I tore off my spikes and rushed to join the racers who were already congregating at the starting line. My heart was pounding with an entirely new sensation in my brief racing experience: excitement.

“MariJean.”  Butler stopped me and looked me firmly in the eye.

“Just remember, if you do this—you have to be fast.”

I nodded. I didn’t know much about competition at that point, but I knew about dignity.

Thus began an athletic career that would not have been possible without my coach’s expertise and guidance. Butler faithfully and mercifully shielded me from the criticism of other coaches that said I’d injure myself, letting me revel instead in a new freedom and love for racing. We worked on proper technique every single day.

Related: Is Barefoot Minimalist Running Really Better for You?

My coach’s insistence on consistent, intentional practice goes back to his boyhood. He was born in the mountains of southwestern Pennsylvania and moved to rural Kentucky as a teenager, where he spent his free time hunting, fishing and playing sports. Smaller and skinnier than most kids his age, Butler found his superpower in self-motivation and mastering correct technique in whatever skills he set out to master.

As a coach, he walked the line between cutting-edge and curmudgeon, combining old-fashioned values of hard work with the latest discoveries in kinesiology and distance training. From tempo runs conducted straight up a Kentucky mountainside sans trail at twilight to sprint sessions in knee-deep snow, Butler wasn’t afraid to use unusual methods and expected competence in a variety of areas from his athletes.

His passion was for proper alignment, probably because it’s where he saw the biggest deficiencies and the most dramatic results. In 2009, he was invited to the Olympic Training Center in Chula Vista, Calif., to attend the USA Track and Field and the United States Olympic Committee’s Emerging Elite Coaches Camp, a week-long training program that emphasized strength and speed development for distance athletes.

“At that time they claimed it was the ‘most cutting-edge’ training developed over the last five years,” he recalls. “It was the very stuff I had been teaching for 20 years. At the time, I was told I was crazy for doing it.”

Those comments never stopped Butler. He’s since branched off from training and started his own business (called The Fundamental Runner) to bring knowledge to athletes serious about reaching their athletic potential. To this day, Butler insists on excellence, regardless of what others think of his methods. “I know this is right, I know this works,” he says. “The main thing is, people have to be willing to change.”

For the record, I barely squeaked into the finals on that rainy day in Indianapolis. But the next day, I scored the first point our team had scored in years with an eighth-place finish. The next week, I dropped eight seconds in the 800m and an additional five seconds by the end of the season, qualifying for the National Association of Intercollegiate Athletics National Championships as a freshman.

During my second season, I took my shoes off on the cross-country courses and finished third at the National Christian College Athletic Association. Throughout my college career, I qualified for nationals several times, won a NCCAA indoor 800m race and broke eight records at my little school. Not bad, considering I’d been a marching band nerd in high school who considered the word “athlete” an insult.

And what about getting injured? The simple answer is, I didn’t. In addition to transforming my running form from saggy and sloppy to strong and smooth, I watched my arches strengthen and rise while my ankle stability surpassed those of my shod competitors.

I no longer consider the term “athlete” an insult. I am incredibly thankful that I had a coach who was willing to risk his own reputation to give me—a mousy academic with no background in any sport whatsoever—a chance to experience the joy of competition. Once you do, you can’t go back.

Real Runners: She Survived Combat Wounds and Ran a Marathon

Real Runners: I Beat Medical Setbacks to Qualify for Boston