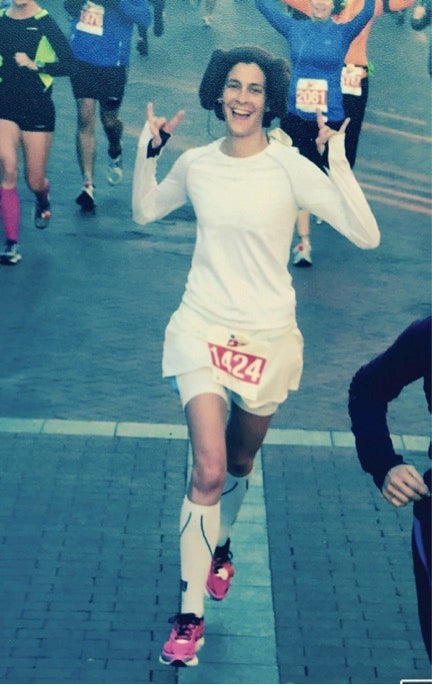 Janine K. Spendlove is our go-to expert for running in costume! An avid runner, Spendlove always liked to play dress up. So when a close friend, who loved flamingos, was diagnosed with ALS in 2010, she decided to run a half marathon in her honor dressed as the lanky pink bird.

After falling in love with running under guise, Spendlove has run more than 50 races in costume—scoring PRs and podium spots along the way. A KC-130 pilot in the United States Marine Corps, she shares her favorite experiences and top tips here.

Carry a camera. I use my phone to snap pictures while running on the course. I love stopping for selfies—especially if I see someone dressed like me or matching my character!

Do a test run. Make sure to run in your costume beforehand. As with any new gear, you don’t want your first time running in the getup to be race day. It’s not fun discovering an awkward seam or itchy thread at mile 2.

Go with what you know. When it comes to gear, costumed running isn’t much different from regular racing. If you normally need Body Glide, you’ll need it for costumed running. Typically take a Gu or sunglasses on a run? You’ll need them on a costumed run too.

Keep it simple. Your costume doesn’t have to be Hollywood-grade. One of my first running costumes was a white running skirt, top and brown ear warmers for the perfect Princess Leia.

Know when to ditch it. Be ready and willing to remove any part of your costume. If it hurts or ends up posing a hazard (think: tripping mid-race), ditch it! Drop errant gear on the side of the course (hopefully in or near a water stop to avoid littering).

It’s all about that base. It’s important to wear something underneath your costume. With appropriate base layers, pretty much any clothing can turn you into a character!

Racing In A Costume? Check These Tips First.

Mind Your Racing Manners! The Best And Worst In The Pack