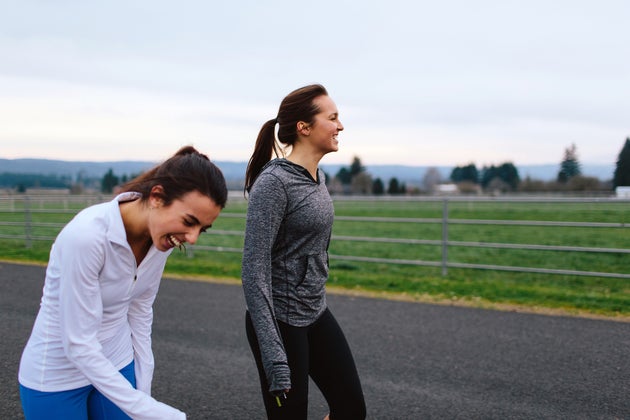 One of the benefits I have found from having time to myself while running is the chance to clear my mind, and let it wander where it pleases. No topic goes untouched as the miles tick by. Recently, I found myself formulating Would you rather? questions that deal with running.

Who better to ask than two of our contributing writers who have a lot to say? Heather and Jack were kind enough to answer the following questions:

Heather: Tricky question. I am pre-menopausal; heat and I do not get along! However, hills and I aren’t friends either, and well, I absolutely despise the cold. I’m from Canada though, so cold for me is colder than 5 degrees Fahrenheit; still, I think I’ll stick to flat and hot.
Jack: Hot and flat.

…Have bloody nipples or tummy troubles?

Heather: Nope on the nipples part, makes me puke a little in my mouth though. Tummy troubles YES, but so far I have not crapped my pants!
Jack: Bloody nipples don’t slow me down.

…Run with no shoes, no socks, or no sports bra?

Heather: I have forgotten a sports bra and had to run in a lacy number from Vicky’s Secret—not a good idea. I have no boobs, and I was sore for days!
Jack: I would rather run with no shoes. I need my socks and sports bra.

…Ice bath or roll out your IT band on a PVC pipe?

Heather: Neither. I’ll drink wine instead.
Jack: I’d rather roll my IT band with a metal pipe in the snow at 10 degrees below with a wind chill, while wearing a sports bra.

Play this with your best running friend or running group during your next long run and watch the miles fly by!