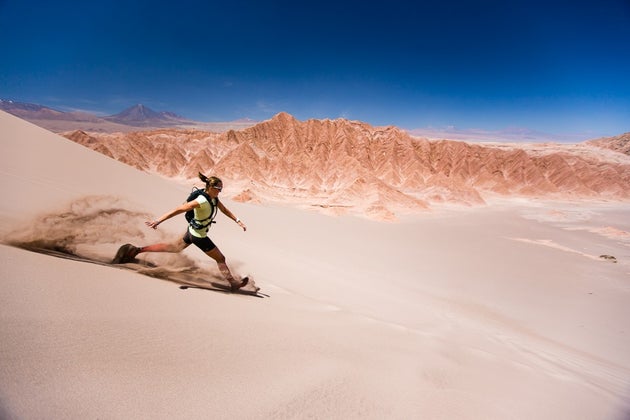 What would you be willing do to help and inspire others? Maybe volunteer somewhere, or attend a charity event to raise money? What about signing up to compete in a series of five seven-day, 155-mile ultramarathons along some of the world’s most inhospitable terrain? If you’re endurance athlete Jax Mariash Koudele, that’s just the kind of thing you do. The elite runner has already completed three of the five races in the 4 Deserts Grand Slam Plus series, competing in Sri Lanka, Namibia, and China, with races in Chile and Antarctica still looming before the end of the year. As if that’s not inspiring enough, Koudele, 36, is running to bring attention to the LymeLight Foundation; after some of her closest friends were diagnosed with Lyme disease, Koudele was motivated to get involved. Noting that Lyme patients are “doing their own ultramarathons with the treatment protocols against all these relentless symptoms,” she began using her races as a means for raising funds and awareness. Her goal is to raise enough money to give away at least one $10,000 grant; she’s currently halfway there. 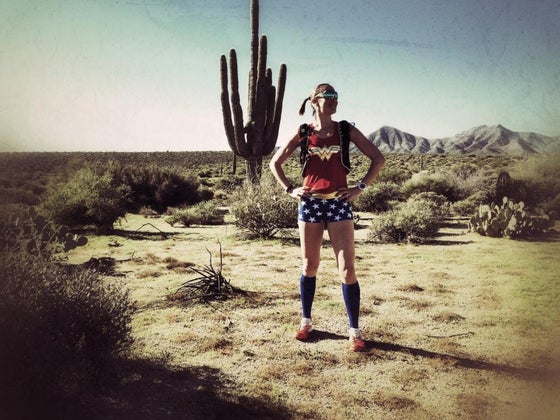 Koudele’s trademark ambition began when she ran her first race at five years old; she won a medal for her age group and was instantly hooked. From there she excelled in high school track and continued on to be a multisport athlete in college, but, “I started to miss the simplicity of just slipping on your running shoes and the freedom, the wind on your face, the immediate meditation and feeling of zen.” Longing to feel that way again but still aware of her competitive streak, she started road racing, racking up half and full marathons. After that it was a successful 50k and a love for endurance running was born. Soon after, to qualify for another race, she spontaneously signed up for her first 155-mile event; after some serious freaking out when she realized what the race entailed, she jumped into training and ended up finishing second overall. The reaction from others was incredible, with many people telling her how inspired they were to take up running after hearing about her feat. Trying to think of how she could do something even bigger to keep moving people, Koudele decided to take on the 4 Deserts Grand Slam Plus. Despite the first race being only five short weeks away, she was drawn in by the fact that no woman (and only three men) had ever completed the series and immediately committed to the daunting challenge.

Each race so far has had its own defining highs and lows. In her first race in Sri Lanka, she left home with blankets of snow and arrived in 90 degree heat with high humidity. She spent the first day vomiting from the climate change and sprained her ankle on the third day. It was tremendously difficult but her tent-mates were extremely supportive and helped her get through the next four days and come in as the female runner-up. In Namibia, she was blown away by the breathtaking scenery and didn’t have much difficulty dealing with the heat, but the competition was incredibly intense and required digging deeper than ever before to become the female champion of the race. China was “an emotional rollercoaster” because of the extreme temperature changes, running out of water, and the powerful winds that collapsed the tents and blew her sleeping bag away, yet she still pushed through to become the female champion again. Yet every negative ordeal has shaped her in a very positive way; what’s amazing, she says, is that “when you go back to the real world, you kind of implement that mindset in work or family, and all of a sudden, what you thought was a crisis before becomes something very solvable.”

Koudele’s life outside the races is just as action-packed. Post-race, she always takes a week off to recover. Then she jumps into a week of 50 miles before resuming her usual 85 miles a week. She trains with her 19 pound pack twice a week (competitors must be self-sufficient and are only provided with water, medical aid and tent space), does long runs twice a week (with one day consisting of a marathon), and some speed work with a coach. On top of all that, she owns a coffee roasting business called Stoked Roasters- a dream since she was eight years old- as well as a boutique marketing business called Mariash Marketing. So where does she find the time? Wonder Woman Jax, as people affectionately call her because of her lifelong love of the character and “can’t stop, won’t stop” mentality, starts her day at 4:30am. She does her strength and stability work with resistance bands while she drinks her coffee before working for a few hours. Then it’s off for her first run of the day, followed by a few more hours of work and a second run or break. More work, then dinner with her husband and bed around 10 or 11pm. No naps, no weekends, just nose to the grindstone 24/7, and she says she often wakes up in the middle of the night buzzing with ideas for her businesses. Lest you think she truly is superhuman, Koudele does confess to a daily indulgence of ice cold beer—“it’s just my thing”—but it’s her simple motivation for her amazing accomplishments that makes her the most relatable. At the end of the day, she says, “I’m so high on life, and absolutely in love with making really cool stuff happen and inspiring people to get after it—with a lot of coffee, mind you!”