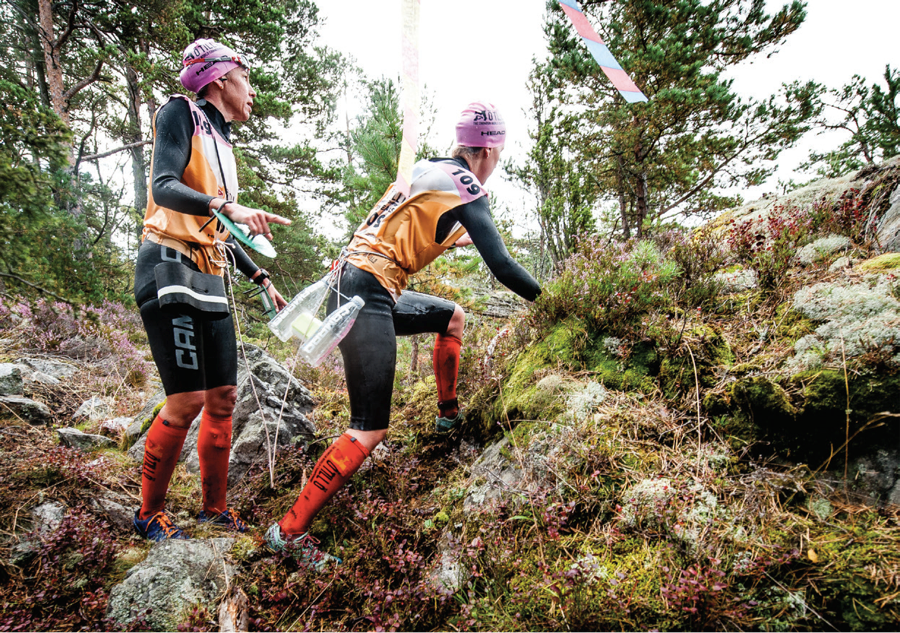 With 25,000 islands at their backdoor, it was only a matter of time before the sports-mad Swedes figured out a way to turn their stunning archipelago into a course for competition. One extreme race format, which enables access to the Baltic Sea without a boat, combines running and swimming—no transition area needed. Forget the marathon; so contagious is this challenge that even the future Queen of England’s sister, Pippa Middleton, took part in a craze sweeping the globe.

The Sports Scene
In Sweden, sport is a national pastime with half of the country’s 9.5 million inhabitants devoted to some type of outdoorsy activity. The Swedish Sports Confederation (Riksidrottsförbundet) claims that 45 percent of Swedes between ages 7 and 70 exercise more than twice a week. Despite the rainy springs and sub-zero winters that host a mere three hours of sunlight, 23 percent of the population still manages to jog regularly, while one-third cycles to work.

They say this get-up-and-go lifestyle stems from a single word in the Swedish constitution, “allemansrätten” or “right of public access.” It’s not a law but rather a respected tradition that gives Swedes access to wander nature freely, including—astonishingly—on private property. So as long as they “don’t disturb, don’t destroy,” citizens may camp, pick berries or run anywhere they please.

There are 119 regularly held running races throughout the year. The Swedes—who have a first-rate command of the English language because they don’t dub American TV shows—are as adventuresome as they are fashion-conscious, and they tend to step up to challenges. It seems that every weekend you wander through Stockholm’s central park (Kungsträdgården), marathoners, triathletes or cyclists are picking up race-day packets and bibs. The Winter Marathon changes city every year, the 205-mile St Olavsloppet Sweden-to-Norway race has been dubbed the “world’s most beautiful relay” and there’s the 54-hour Täby Extreme Challenge 200-miler. Even among these serious endurance events, there’s one race that stands out for its grit.

Swim, Run, Repeat
The nation that invented dynamite, GPS and the pacemaker brings us the sport of SwimRun. Thought up in 2006 by Mats Skott and Michael Lemmel, the Ötillö SwimRun World Championship takes place the first Monday in September. Ranked as “one of the toughest one-day endurance races in the world” by CNN, the course isn’t for the faint of heart.

“Ötillö” means “island to island” and, in this case, alternating between running and swimming from dawn to dusk across 26 unchartered islands in the Stockholm archipelago. Racers traverse dense forest, scale moss-covered rocks, slide knee deep in mud and cross near-freezing water. The race is so technically challenging that one wrong move equals a snapped ankle or broken wrist—all over the course of 47 miles.

The kicker? You must run in your wetsuit and swim in your running shoes to cover the additional 6.2 miles of open-water swims, with the longest leg being a full mile. Teams of two must remain within 30 feet of each other throughout. The race may seem impossible, but in addition to attracting Pippa Middleton, ultramarathon champion Rory Bosio raced last year, lending these persuasive words on the eve of the experience: “Women need to break their fitness routine and invigorate themselves with challenges, even if it’s just, ‘Today, I’m going to run up that hill.’ And destination sports are an adventurous way to see the world.”

When to Race
Sweden’s climate provides a small window for those of us who lack Scandinavian blood. Late spring and summer are ideal, with the added bonus of eternal daylight. The SwimRun season starts with the 23-mile Üto race the last weekend in May, and while the thermostat then is a balmy 70 degrees on land, the water can be a frigid 46 degrees. (When I attempted the race, I found it so cold that I couldn’t straighten my fingers to put on my hand paddles. My partner had to force them into the loops before each swim.) The SwimRun calendar ends with Ötillö in early September when the Baltic Sea has warmed (if you’d call it that) to 50 to 60 degrees.

What to Wear
To avoid littering, at every SwimRun, whatever equipment you start the race with must still be with you when you cross the finish line, or you will be disqualified. Each team is required to carry a first-aid pressure bandage (packed waterproof), two wetsuits (invest in a decent quality), one compass, a waterproof map holder and two whistles.

Speaking from experience: Go for a shorty wetsuit for better range of motion. Alternatively, you can cut the legs, but make sure to train like this and don’t modify your suit last minute (as my team did). A Merino wool shirt underneath will be your best friend and grab lightweight trail shoes that won’t weigh you down when wet and will provide traction for running on rock. Swim accessories are allowed, so you may bring hand paddles (the bigger the better to add power to your stroke), or, like Pippa, attach a flotation device to your back. Rope yourself to your partner to be pulled by her momentum when you lose steam. You’ll also want goggles and a lightweight hip pack. A neoprene cap and additional headband may be lifesavers. Stop by Wolff Wear Sports on 145 Valhallavägen to get kitted up.

Fuel to Finish
Sweden was arguably the first Western country to disregard the formerly trendy low-fat diet in favor of low-carb nutrition. New Nordic cuisine rules with pickled herring, salmon, Swedish meatballs with lingonberries, Swedish eggs and delicious dark, hearty breads. This all seems so healthful but it is fantastically counterbalanced by a serious dessert scene, which fitness-fanatic Swedes indulge in (along with a post-race beer!). Try the Prinsesstårta sponge cake filled with jam.

During the race, fueling can be difficult. While training, my coach recommended I avoid eating mid-workout—even for long sessions. Energy stations are few and far between on race day, so it’s essential for the body to get used to powering through when hungry. You can stick a few gels in your wetsuit sleeves, but your hands may be too cold to open them. The stations on course serve up energy bars, gels, bananas, candy, bread, sausages and cinnamon buns. Word of advice on the creamy buns: Stay away unless you have an iron stomach or you may be stuck between a rock and a hard place (in a wetsuit).

5 Cross-Country Races For Runners Of All Ages

The Right Way to Fuel During Your Long Runs