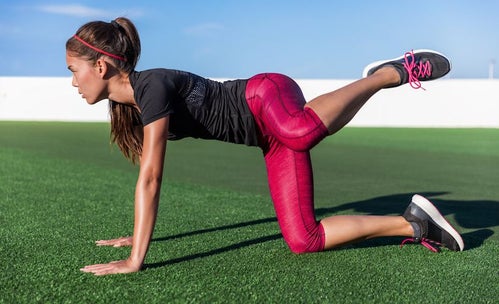 This excerpt is adapted from Running Rewired by Jay Dicharry. In Running Rewired, America’s leading endurance sports physical therapist and coach shares a program for runners to become stronger, faster and more durable. Jay Dicharry distills cutting-edge biomechanical research into 15 workouts any runner can slot into their training program to begin seeing real results in about six weeks.

When you run, especially as your speed increases, more and more oomph needs to come from the muscles that extend the hips. But it’s likely that years of overstriding have wired your muscle memory to favor the quads and neglect the glutes. Said simply, the typical runner is quad-heavy and glute-light.

Most runners overstride. The lab data I’ve collected over a decade reveals why—the vast majority of runners don’t know how to fully use the muscles in their backside. It would be much easier if muscle control was balanced around the body, but the reality is most people are out of balance, a problem that is not exclusive to running. Dr. Vladimir Janda, a pioneer in muscular therapy, coined the term “lower crossed syndrome” to describe the imbalance that occurs when the hip flexors, quads, and low back muscles are tight and overused, and the deep core and glute max are asleep at the wheel.

Earlier chapters of Running Rewired reveal that the best way to inhibit the muscles around your hips is to screw up your posture. And then there’s the issue of tight hips. If those muscles are tight, your hip won’t have full extension to both sides of your pelvis. This imbalance isn’t a running problem; it’s a body problem. But if this body problem isn’t corrected, you’ll never be able to correct your stride. About 80 percent of runners will need to do a lot of hip flexor stretches to improve this.

Your quads are big muscles, capable of producing a huge amount of force. No matter what your running form, you need your quads to show up ready to work. But muscles don’t act alone, and we certainly don’t want the quads to carry the torch when running. Changing your dominant muscles for moving and running is critical to improving joint health and performance.

The Problem With Quad Dependency

Being overly reliant on your quads creates three big problems.

First, it can wreck your knees. Nearly every study about running injuries ranks patella-femoral pain in the top three injuries ailing runners. Your patella, or kneecap, is basically a pulley for your quad. When you overstride, the torque or mechanical load on the knee is greater. The quad has to work harder, creating more shear across the surface of the patella, which isn’t the best thing for the long-term health of the cartilage underneath it. Changing your muscle dominance will reduce stress on the knee.

Second, there are some performance implications for our bias toward the quads. Your quad has a greater percentage of fast-twitch fibers. So for a given running pace, your quads will be working closer to peak capacity and enter into a fatigued, or an acidic state, sooner. When the muscle gets too acidic, the pH level drops and the muscle can’t contract and relax as well, so you end up hitting the wall. Since the glute has more slow-twitch fibers, it produces smaller amounts of acidic waste products and can last longer before building up a lot of waste. This means you can drill the pace a bit harder and longer without falling apart.

Finally, your quads simply can’t match the total body control your glutes are capable of setting in motion.

Your glute max has three primary functions, all of which benefit your running. I go into detail on the important role of the glutes in Chapter 7 of Running Rewired, but let’s summarize here:

The Myth Of The Ideal Running Cadence