A muzak version of Leonard Cohen’s “Hallelujah” echoes over the loudspeaker, the volume just loud enough to hum over the ever-present drone of traffic on Franklin Boulevard in Eugene, Oregon.

Two women dressed in their Brooks-branded racing kits after the oppressively hot 10,000 meters trudge over the blacktop to their car, parked in the grocery store lot, U.S.A. Track & Field Olympic Trials bibs still pinned to their tops.

Another competitor in the 10K with a baseball cap pulled low over her face jumps out of an SUV and walks posthaste through the entrance. A minute later she emerges, having purchased a single bottle of wine. No bag. She disappears back into the passenger side of the car and it drives away.

The epicenter of the U.S. track and field universe is overheating. It is 100 degrees outside. Ten days of Olympic Trials in the COVID era are approaching the end. And the grocery store is an air-conditioned mecca for those who seek fuel, others who seek solace, and the select few who seek celebration, too.

Face masks on, to the Market of Choice we go. Yes, there’s a burrito bar inside, too.

The market is where track fans and Olympic hopefuls, their coaches, agents, parents, and the occasional confused Eugene resident collide during the Trials. And in 2021, it was one of the few places to find athletes out in the wild, in real life—to see them as the mere mortals they are, just as annoyed as the next person that the only Gatorade flavor left is grape.

The 2021 Olympic Trials were an odd affair. It began with a difficult doping scandal and unfortunate injury withdrawals, and ended with an historic heat wave that delayed the competition until after dark. In between? World records and astounding performances, often led by fresh-faced youth dethroning some of the sport’s most-decorated and revered athletes. The great COVID delay favored the young, giving them a chance to grow stronger without the pressure to compete, while the veterans suffered 365 additional days of pounding and grinding they hadn’t planned on.

What does “fair” mean? Nothing. It means nothing in sport.

Holding track and field’s biggest post-pandemic event yet meant other concessions, too. Spectators, with proof in hand, divided into vaccinated and unvaccinated sections, leaving a new state-of-the-art, $270-million Hayward stadium looking sparse with fans, who searched for the shadiest seats. Face masks on the concourse. And the loss of real conversations with the athletes who made the team—and perhaps more significantly, many of those who did not.

The mixed zone at the Trials is typically the first stop for each competitor, giving the media the opportunity to talk to the champions and the defeated alike. You can find every human emotion there at any given moment and it’s where some of the greatest stories are generated—an eighth-place finisher often has something just as profound to share as the woman who set a meet record in the same event.

The mixed zone in 2021 was virtual. Officials, at their discretion, pulled athletes to answer typed questions from accredited reporters whose microphones were muted on Zoom. And, while there’s little doubt that some people may prefer journalists to remain silenced, well, it just wasn’t the same. A lot of the soul of the Trials seemed missing.

Just got an interview request to talk about cheese during Olympic Trials.

But back at Market of Choice, we could reclaim a smidgeon of the spirit. So I invited Rebecca Mehra, who made the final of the 1500 meters (11th place) and the semifinal of the 800 meters (11th place), to go cheese shopping with me. Why cheese? Other than the indisputable fact that it’s the world’s most perfect food, with some smart social media throughout the Trials, Mehra had suddenly gained notoriety for her desire to find a cheese sponsor. Why not hash out her Trials experience over the makings of a charcuterie board?

“Overall I’m proud and happy. I’ll always get to say that I ran five races in a week,” Mehra says, standing in front of the store. “You have to put so much work just to get here in the first place. Once we’re here, it feels like it becomes all about who walks away with a flag and an Olympic berth, but just to be top 20 in the country is humongous. It’s something I’ll always remember as an accomplishment.”

Mehra lives and trains in nearby Bend, Oregon, with Little Wing, the Oiselle-backed group coached by Lauren Fleshman. She knows where to find the fancy cheese, right inside the door, before you get to the produce. The best kind? La Tur.

“It’s like a runny brie cheese,” she explains. “The only thing I don’t love is like a cheese whiz or a Kraft American square. I’m not that psyched about it. But I could eat cheese and crackers all day. That’s my favorite post-run snack, almost every single day.” 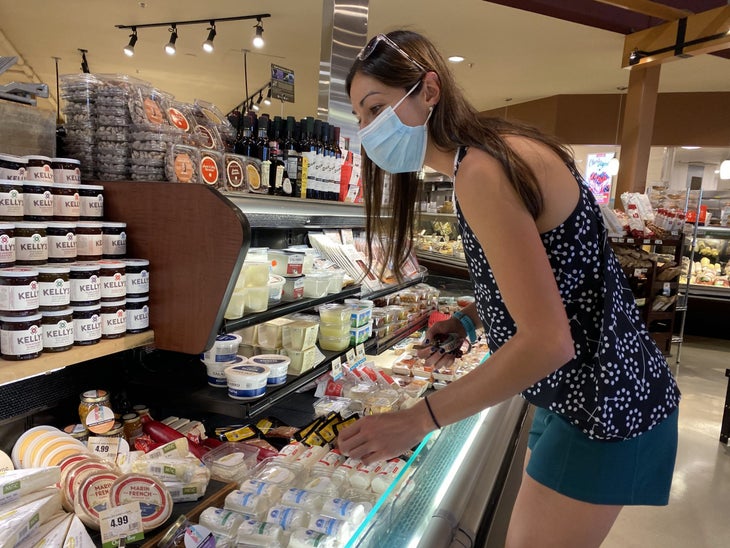 Mehra explains that the perfect cheese board for her post-Trials celebration should include one aged cheese, like a cheddar or gouda; something soft, her preference is goat; and then something firm, like manchego. The parmesan crisps? Always a crowd pleaser. Her go-to crackers are Raincoast—Mehra grabs a package of the rosemary raisin pecan variety. Add a little fig jam to the mix and it’s a party.

She picks up the Cowgirl Mt. Tam. It’s a delicious creamy cheese, she says, and she reserves it for special occasions.

In between her 1500-meter final and preliminary round of the 800, Mehra made a brief comment in the presence of her boyfriend, who was managing her social media accounts while she competed. She said she’d “run her heart out” for cheese. He tweeted it and the offers started pouring in.

By Saturday Mehra had heard from Velveeta, Whisps, Cabot Cheese, and Rogue Creamery, to which she is partial because it’s based in Oregon. The larger point? The platform that the Olympic Trials offers its qualifiers can’t be denied, but it’s fleeting and never more so than when COVID restrictions stifle interactions. The health of the athletes is paramount, of course, but it left me nostalgic for face-to-face conversations that reveal something more than splits and race strategies.

We decide to visit the standard dairy aisle, where the Krafts and Tillamook brands are stocked. What’s her everyday choice when the fancy stuff isn’t necessary? 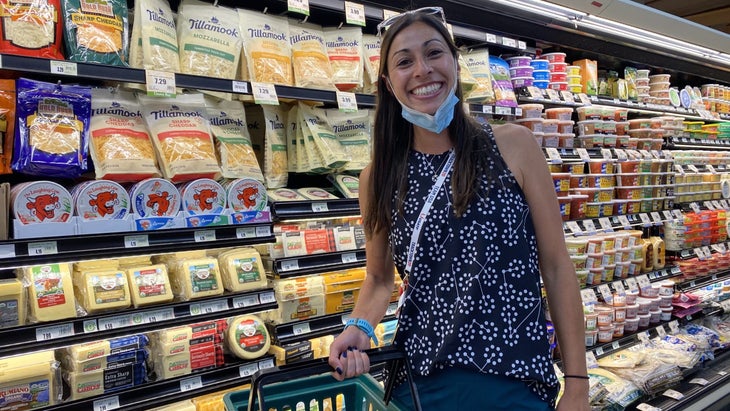 Along the way we bump into Grant Fisher, the Bowerman Track Club athlete who at this point had already made the Olympic team in the 10,000 meters. His 5,000-meter final is the next morning (spoiler alert: he qualifies in that event, too). He and Mehra were teammates at Stanford University—they stop to catch up briefly, exchanging congratulations and swapping sightings of other college friends and coaches. His BTC teammate Woody Kincaid, also Olympic qualifier in the 10,000 and 5,000 meters, is meandering the aisles, too.

Mehra reaches for some cheddar cheese sticks, which she likes to throw in her bag (if it’s not 100 degrees outside) to eat after a workout. While she’d like a sharper cheddar, the mild will do in stick form. We turn the conversation back to the 800 meters. After she hurdled another athlete who had fallen in front of her during the semifinal, she filed a protest to get a spot in the final, but to no avail.

“You know what? Today I feel pretty cashed,” Mehra says. “So, maybe it’s a blessing in disguise.”

She reaches for a Kombucha and heads for the checkout, piling a plethora of blocks of cheese into the bag to share with her family and friends who came to support her. They had fondue for breakfast.

“You know, I was able to get out there, put myself in it, and enjoy myself against not only the best athletes in the country, but truly some of the best in the world,” she says, reflecting on her Trials experience. “I don’t know. I feel really good about it. You can feel frustrated if you don’t walk away from this meet making the Olympics—I felt that initially, too. But you just have to be proud of yourself for getting here and proud of yourself for giving it a shot.”

It was so exhausting cheering on the 5K that I needed to refuel! pic.twitter.com/feRLHhoV2C

The blast of hot air feels like a furnace back out on Franklin Avenue. The parking lot is as busy as ever, a steady stream of who’s who coming and going throughout the afternoon. A couple of athletes—contenders in the men’s steeplechase, if my guess is correct—exit with what appears to be a lifetime supply of La Croix, possibly pamplemousse. They’re heading in the direction of Hayward Field, four blocks west. Day nine slate of afternoon competition is about to begin.

The mixed zone at Hayward Field may have been gone this year, but the entrance to Market of Choice served as a solid substitute for anybody who had a story to share—or was in search of one to write.

All you had to do? Just say cheese.