Professional British trail runner Holly Page looked forward to a packed racing schedule this spring and summer. In early April, she intended to compete at the Mt. Awa Skyrace in Japan. Next, she aimed to bop over to Russia for the Mount Elbrus ultra marathon. And for the rest of the summer, she planned to travel around Europe in her van to train and race. The COVID-19 pandemic wiped out Page’s plans for the foreseeable future. But she remained calm.

She had gone through this before.

“There was no point in stressing,” Page says. “What good would doom and gloom do? You just have to make the best of it.”

The parallels between Page’s injury and the COVID-19 crisis prove more than coincidental. While navigating a global pandemic proves unprecedented, runners can learn from something all too familiar: injury.

In addition to Page, track star Emma Coburn, mental strength coach Danielle Synder, and professional trail runner-doctor Megan Roche share the lessons they have learned from past injuries to help them handle the current pandemic.

Eight-time U.S. champion, Olympic bronze medalist, and world champion Emma Coburn reigns as the invincible American force of the steeplechase. But she’s suffered her share of setbacks sandwiched within the success.

In June 2013, Coburn’s goal was to break the collegiate record in the steeplechase and to qualify for the World Championships in Sochi, Russia. During the preliminary round of her last NCAA Division I championship, slight muscle soreness exploded into excruciating back pain.

Coburn persevered through the pain to win the NCAA championship two days later. But she missed the collegiate record, and an MRI confirmed the worst: her sacrum was broken. “I had never even missed a practice due to injury,” Coburn said. “All of a sudden, my season was over.”

Rather than wallow in what she would miss, Coburn focused on the path forward. “There was nothing I could do,” Coburn says. “I just had to let my body heal.”

Coburn and her now husband Joe took a vacation to Hawaii where she unplugged and chilled on the beach. She views aspects of the pandemic similarly to that stress fracture.

“Like a bone injury, we have no control over what’s going on,” Coburn says. “Our job is to stay at home to help flatten the curve. We just have to let time pass and find ways to gain fulfillment and happiness.”

The Olympics have been postponed until July, 2021, and the World Athletics Association announced that race results will not count as Olympic qualifying times until December 1. But Coburn remains calm, taking it one day at a time. She chooses to focus on what she can do today to find joy, stay safe, and to be the best athlete she can be—building her training base with half-marathon style workouts, elevating voices of track and field athletes as Vice President of The Athletics Association, and sharing baking projects with her social media following.

“I’m proactive,” she says. “I don’t let the world happen to me. I care about things that I can control.”

Yet Coburn also acknowledges how the uncertainty of the pandemic resembles pesky soft tissue injuries like achilles tendonitis—another injury she knows personally. In January 2015, Coburn felt a burning ache on the back of her ankle. She managed it through that spring and summer track season, winning another US national title and taking fifth at the World Championships in Beijing. But by the end of the season, Coburn knew her achilles needed time off to heal.

This notoriously vexing injury does not come with the obvious timeline and set of instructions like a stress fracture. Despite days with significant setbacks, Coburn tackled her achilles with the same positivity and diligence as her stress fracture.

Like with an injury, Coburn finds solace in remembering that these measures to curb the pandemic are temporary. She also recognizes that running does not sit in the center of the universe. Despite all of her success, Coburn does not attach her identity to running results. Injuries strip runners of external validation. Suddenly, race results and praise cannot provide meaning.

Transcending that singular identity enabled Coburn to recognize her worth outside of her profession. She views the pandemic as a similar opportunity to contextualize the role of running in someone’s life. Even without races to earn external validation, athletes can capitalize on this time to consider their value beyond race results. They can use this time without races to go inward and find intrinsic purpose.

Mental strength coach Danielle Synder tells injured athletes that their feelings are valid. Same goes for the pandemic. If someone feels anxious, worried, or stressed about the pandemic, that’s okay. In fact, it’s normal.

Humans innately crave goals; they like concrete information and being told what to do. “Like with an injury, your response to the crisis is valid,” Snyder says. “What you are feeling is an appropriate response to the unknown. There are no boundaries [right now] to ground ourselves.”

At the same time, many of us hold so much self judgement about how we should be feeling, Snyder says. “Should I feel guilty about whether I care about running?” The answer, Synder says, is no. In addition, injuries remind runners of their mortality. They force athletes to consider what truly matters. She believes the crisis acts as a similar alarm.

“Humans have a false sense of security that we’re further from death than we actually are,” Synder says. “A lot of people are currently experiencing that they don’t have the control that they think they have.”

A trail runner herself, Synder finds this situation somewhat similar to the time she ran the 460-mile section of the Pacific Crest Trail across Oregon. “The trail is so long that it’s overwhelming to think about the whole thing,” she says. “But it’s palatable if you break it down day by day, hour by hour.”

Synder also focuses on how hardships offer an opportunity to correct structural issues. An injury forces a runner to confront weaknesses like biomechanics or poor sleep. Likewise, the pandemic presents a chance to improve a habit or mental health. “How we will respond now will help determine if this helps or harms humanity in the future,” Synder says. “We need a crisis—whether it’s an injury or a pandemic—to change. Otherwise we will keep ignoring the underlying problem.” 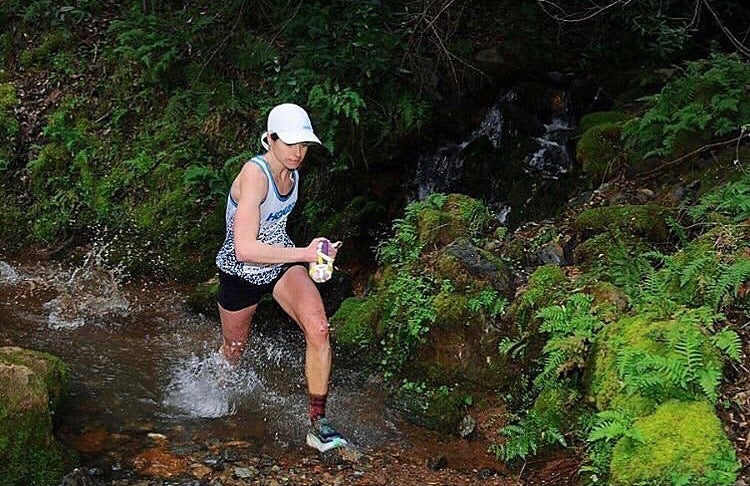 In 2016, Megan Roche was named USATF Trail Runner of the Year at the ultra and sub-ultra distances—while in medical school at Stanford University. The four-time national ultrarunning champion, North American Mountain Running Champion, and six-time member of the U.S. world ultra running team often woke up before 4am to train in circles around a field in the dark before a full day on her feet at the hospital.

Roche graduated from medical school in 2018 and faced a tough decision: continue on to residency, or focus on running. She chose the latter. Soon after making that decision, Roche felt a literal pain in her butt.

“I thought I would just take a few days off and it would get better,” Roche says. A few days morphed into a few weeks. “I didn’t realize the magnitude of what was wrong.”

Her medical training indicated high hamstring tendinopathy. But a diagnosis didn’t make the pain disappear. “I lost all power in my right leg,” Roche says. A series of MRIs showed progressively worsening tearing. She got a cortisone shot, which helped—initially. But the pain returned even worse than before.

“I was frustrated,” Roche says. “I couldn’t progress to the point where I could put any power out of my leg. I just felt like I was trapped in easy running, not getting any faster.”

Roche tackled the injury diligently, working with a strength coach and taking time off. Nothing helped. She started to question her existence as a runner, and also the role of running in her life.

“I thought maybe I would never be the same runner again,” she says. “I realized I can’t rely on running.”

Nine months ago, Roche’s hamstring finally had enough. It ruptured tendon-off-tendon. A surgeon called trying to repair her hamstring analogous to “sewing together hamburger meat” predicted that she would never run at the same level again.

Yet the rupture cleared Roche’s mind. “I had struggled for so long with uncertainty,” Roche says. “This injury forced me to find other things that provide meaning.”

Roche embraced the bike; she even considered transitioning to professional cycling. She took a job at her medical school research professor’s fledgling startup AxGen, a genetics company for athletes. She applied to a Ph.D. program in epidemiology at Stanford.

Then a different surgeon offered a more optimistic outlook on her injury, and repaired her hamstring. After six weeks of non-weight bearing movement, Roche slowly returned to strengthening her “noddle” leg, returning to biking—and finally, running.

Seven months after rupturing her hamstring, Roche won her first trail race back. But even still, Roche views running differently now. It’s not as important or defining. She balances her own training with her Ph.D. program, serving as AxGen’s Head of Endurance Sports, and coaching.

“Rupturing my hamstring opened my eyes to the need for balance outside of running,” she says. “Biking and hiking became permanently integral to my routine. And I got clarity.”

With no races on the horizon, she sees now as a chance to examine the role of running in our lives and to connect with other things that nurture satisfaction. Just like her period of unease spurred growth, she sees the same opportunity now. “The struggle comes to something,” she says. 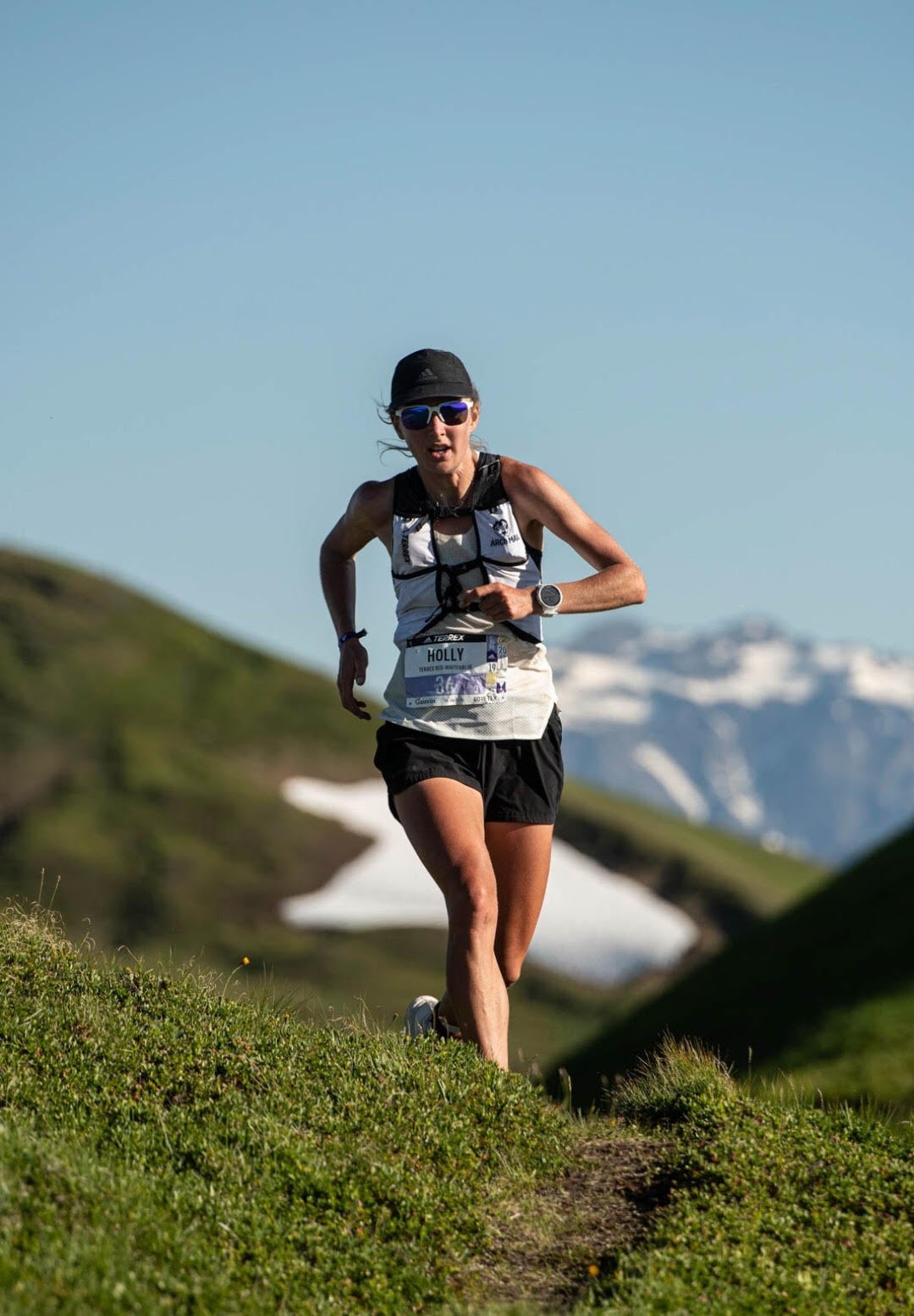 Get Back to Basics

When the COVID-19 pandemic hit Great Britain, Page felt distressed for society. But she felt acceptance for herself. She learned the hard way when she broke her foot last spring. At this point, the pandemic has led to the cancellation of all of her races until July. Page returned to her parents’ home in Yorkshire.

Page has scored a slew of wins on the Skyrunner World Series circuit and has competed for the Great Britain national team at the trail running world championships. Yet she infamously races as much as she can. If she’s home in Yorkshire, she will jump into one or two fell races across the local moors during the week before lining up at a prestigious trail or ultramarathon event that weekend.

“I’m not proud,” Page says. “I’m happy to stand on a starting line even when I’m not fit.”

Page can push herself past the limits of most mortals, and that incessant striving can take a toll. By the Golden Trail Series final in Nepal last November, Page wondered if she had lost her edge. She lacked her killer instinct. In retrospect, Page just needed some time away from racing to let her mind and body recover. An injury often provides that opportunity. This time, COVID-19 does.

The United Kingdom allows residents to leave their house once a day for exercise. For Page, this policy means drastically curtailing her van lifestyle and her intense training and racing schedule. In addition to running, Page enjoys bikepacking trips all over the world. But she views being able to leave the house at all right now as a privilege.

“The pandemic presents a chance to take the pressure off,” Page says. “And let my body and mind calm down a bit.”

While Page currently runs nearly every day, she follows her motivation and lets herself slow down and enjoy running for the simple joy of running itself. She relishes time with her family, and the hyperpolyglot stays busy subtitling films into English.

“When I returned from my foot injury last year, I appreciated running more than ever,” Page says. She predicts the same will happen this year. “Once we can race again, we will appreciate that chance to push ourselves and to connect with friends more than ever.”