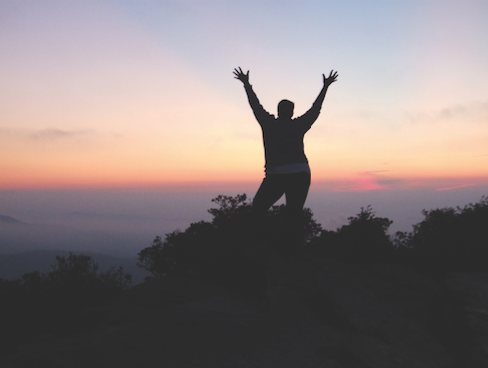 Excerpted from A Beautiful Work In Progress by Mirna Valerio. © 2017 Published by Grand Harbor Press, October 1, 2017. All Rights Reserved.

At one point, I stopped dead in my tracks. No one seemed to be coming or going. I took a deep breath and resolved to keep moving forward, even with the risk of a second and third cholla cactus attack. I didn’t care. I had to get to Jackass. Just then, a runner who moved toward me from the opposite direction was startled by my presence in the desert darkness.

“My headlamp burned out,” I said, frustrated with myself for having apparently overlooked the possibility of having a non-functioning headlamp.

“That’s a bummer! Do you have an extra?”

“Listen, I have an extra flashlight that you’re welcome to use.”

“Oh my God, really?” Having long, drawn-out conversations in the middle of the night wasn’t exactly easy after having been moving for more than 18 hours.

“Yeah, just leave it in my drop bag at the start when you’re done. No worries.”

“Thanks so much, Ray. Like, really. Thank you so much!”

Related: Mirna Valerio On Why Nature Remains A Huge Influence On Her Life

Trail magic happens most unexpectedly and when most needed. Ray had given me a lifeline and a much-needed boost of mental energy. I now could continue to the aid station (albeit slowly and with some hallucinating), replenish my energy stores (food, good feelings, gear, lube), and then keep moving forward. I was five and a half miles away from the next station, and so far those miles had been the most difficult of the night. Even though I had left the first aid station feeling fairly awesome, I quickly realized that I still had many, many more miles to go.

I would have to run, walk, crawl, death-slog, and slowly inch my way forward through the night, ignoring my already out-of-sync circadian rhythms and precious sleep cycles, into this unknown territory that I would become quite familiar with through the nearly 26 hours it would take for me to reach the finish line. I would have to finish traversing this 15.3-mile loop, and then do it again. Although the loop had been an uplifting and hopeful new beginning in the brilliant morning and afternoon light, it would be downright shudder inducing in the fully enveloping and stunningly claustrophobic darkness of the desert night. The headlamp incident paled in comparison to what was next.

A herd of growling javelinas was coming to get me. The javelinas’ menacing oink-grunts grew louder and more intense as I rounded bends on the course and climbed dusty, pebbly hills among light-absorbing, looming saguaro and vicious cholla cacti.

“Did you guys hear that?” I asked a struggling runner and her pacer, the woman whose job it was to keep her runner on course, at a strong pace, and sane.

“The animals? The ones, um … growling?” I said, realizing I might sound crazy.

“Um, no?” They continued on, the thin, fresh-legged runner reminding her charge that she had to eat something before the next aid station, which seemed like it was an eternity away. They ran off, the overly perky pacer a few steps ahead of her delirious runner.

I definitely heard growling, I thought. I am not crazy. What else could that noise be? I couldn’t have been the only person who could hear the fairly consistent, low-pitched slow rumble that sounded as if these piglike animals were planning their attack, timing their oink-growls to each of my Pearl Izumi–clad steps.

This must be why this race is called the Javelina Jundred! It was an epiphanic moment. What makes this race so special is that runners get to hear and possibly encounter actual javelinas. Wow!

The low rumble continued in an almost conversational way. The sound would start as a barely audible but insistent hum and grow in intensity until the whole lot of javelinas had agreed on their plan to ambush the runners that night and leave their stinking, lifeless bodies to dry and disintegrate in the arid desert heat. I envisioned wild boars with large yellow nutria-like teeth darting about, not much unlike Templeton the rat from Charlotte’s Web.

Wait a minute! Why isn’t anyone talking about or cowering in fear from these wild animals? Can’t everyone hear them? Everyone else on the course must be a veteran of the race. No one had ever mentioned this in any of the pre-race communications. Can’t wait to write my race report.

I imagined coming upon human skeletons and screaming, gasping, and fainting in horror after the sun started to rise. Fortunately, both common sense and reason interrupted my auditory hallucinations. Let’s see, on my first two loops, I hadn’t seen any human skeletons in the daylight. Second, no one else seemed to be bothered by the so-called growling, menacing as it was. Third, not even one javelina jumped out from behind a saguaro to attack me. Fourth, the chorus of growling javelinas had a rhythmic quality to it.

(It wasn’t until many miles later, when I rounded a bend in the trail near the Rattlesnake Ranch aid station, the last one before reaching Jeadquarters, that I learned what was causing the noise: headlights and taillights from a few cars that had been on the desert roads for the previous few hours doing who knows what, drifting, speeding up, slowing down…doing what people do in cars in the desert in the middle of the night enveloped by dark sky.)

As I approached Jackass Junction, I heard pulsating, bass-heavy music coming from what sounded like a rave, a music-and-dance oasis in the middle of the desert. People sang and laughed loudly. I kept trudging on, closer and closer until I could see the light emanating from the many lines of twinkling bulbs that hung around the medical tent and a small enclosed area that resembled an outdoor-wedding dance floor.

The aid station appeared like a mirage in an old Bugs Bunny cartoon. I crested a small hill and there it suddenly appeared. I thanked the universe and quickened my step. I couldn’t get there fast enough. After collecting my drop bag from the neatly arranged bags just a few feet from the aid station, I plopped my heavy self on one of the cheap plastic folding chairs across from the tables stocked with a variety of trail goodies that had changed according to the temperature. There was hot broth, ramen, tea, and coffee available to help runners maintain body heat during the night. A few runners rested under heavy blankets in the medical tent, warming themselves before attempting the next few miles.

I put my feet up on another chair, leaned back, and breathed deeply, inhaling the scent of wood smoke coming from the nearby fire pit. The tip of my nose was chilly, and I shivered a bit. Even though I had no intention of putting any food item near my lips, I knew that I would need to ingest some calories in order to stay warm through the cold, cloudless night. My stomach had shut down during the first few miles of the third loop, through the headlamp debacle, refusing most food and allowing only a painfully small amount of hydration in.