In March 2017, Kelly Herron, 40, was preparing for the Chicago Marathon—her first 26.2-mile race. Halfway through a 10-mile training run in Golden Gardens Park, she stopped to use a public bathroom. As she dried her hands, she noticed something–or rather someone–that was out of place.

A man with a mangled mane of auburn hair and a beard to match stood staring at her. Moments later the man pounced on top of Herron, pushing her to the ground and attempting to roll her onto her stomach. Herron fought back utilizing self-defense tactics that she recently learned from a training session at her work, all while yelling “Not today, M**F**er!”

Following her attack, Herron’s mangled GPS lines, which documented her fight for her life, have inspired runners worldwide. But her quest to help others has come with its own challenges. In October 2018, only months after her Golden Gardens Park assailant (who was serving a three-year sentence) died in prison, Herron was attacked—again—while running. A man assaulted her during the final mile of the Girlfriends Run for a Cure Half Marathon in Vancouver, Wash. Herron chased him down, screaming, “Assault! Assault!” effectively ensuring his arrest.

During the darkest moments following her attacks, it was Herron’s mother Nancy, 70, who helped her through. Herron said this was especially true after her initial assault in 2017. 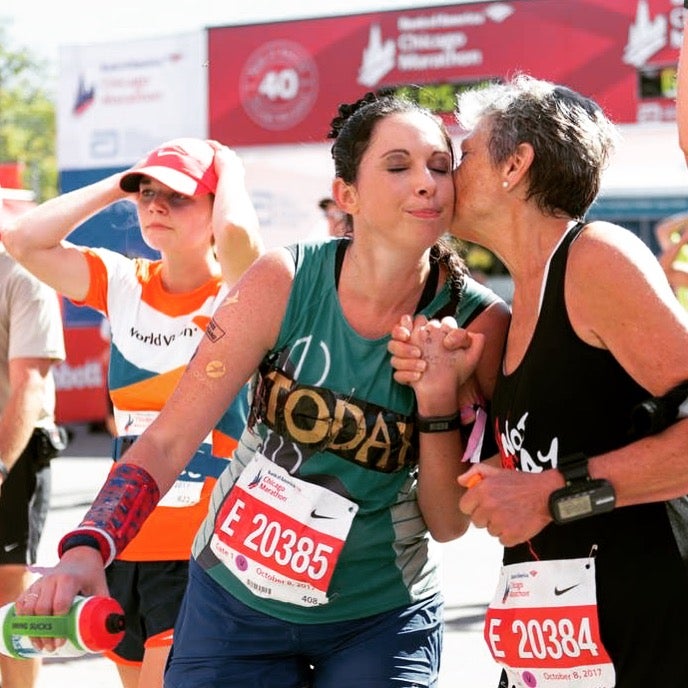 “I remember the day that she got me running again,” said Herron. “I don’t think I would have had the gumption to continue training for the Chicago Marathon without her.”

Or finish that marathon without her, either. Seven months after her 2017 attack, Herron began struggling at mile 15 of the 26.2-mile race. Nancy warded off medics who asked–on three separate occasions–if Herron needed to be escorted from the course. Nancy assured them that her daughter was fine, and that she would finish–which she did.

“I knew that I wouldn’t go through training again if I quit,” said Herron, who crossed the finish line of the Chicago Marathon in 5:49:54, with her mom by her side.

In the 1980s, decades before the mother-daughter duo began running together, Herron joined Nancy’s training runs. Running strollers not yet invented, Herron and her older brother rode their bicycles beside their mom as she ran in their Florida neighborhood. Nancy, who moved to Battle Ground, Washington in 2011, continued to run in varying degrees of intensity and regularity throughout the years. But she never expected Herron to follow in her footsteps.

“Growing up, Kelly was a softball player and an athlete but running was not her bag,” said Nancy. “I never dreamed that Kelly would become a runner.” 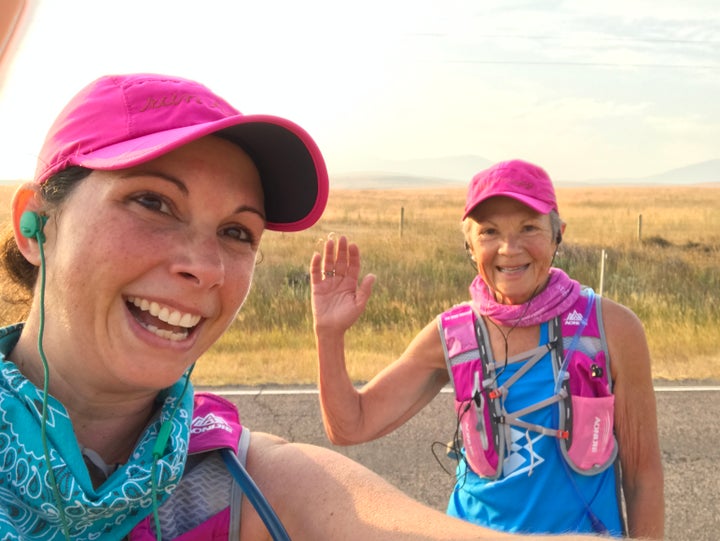 And then something changed. For several years, Herron’s alcohol drinking had become problematic. So in June 2015, she made the decision to stop drinking and to run a marathon. Herron reached out to Nancy, who sent her daughter a book: The Non-Runners Guide to Marathon Training.

Herron eventually altered her goal from completing a marathon to finishing one race a month. Training for races came with a schedule; she knew exactly what she needed to do each day. With more free time and energy, running became Herron’s outlet.

“Rather than reaching for a drink, I could reach for my tennis shoes,” said Herron. “Within an hour, I would have the relief that I used to search for elsewhere.”

Herron’s newfound interest reignited Nancy’s previous passion. Instead of their former pastime of bar hopping, the two bonded through running and their weekly Sunday long runs. To date they’ve trained for and completed “more races than can fit on a medal rack,” including that memorable 2017 Chicago Marathon. Though they don’t always race side by side, they usually finish within two minutes of one another. If one runs faster than the other, she’ll wait at the finish line, so they can cross together. 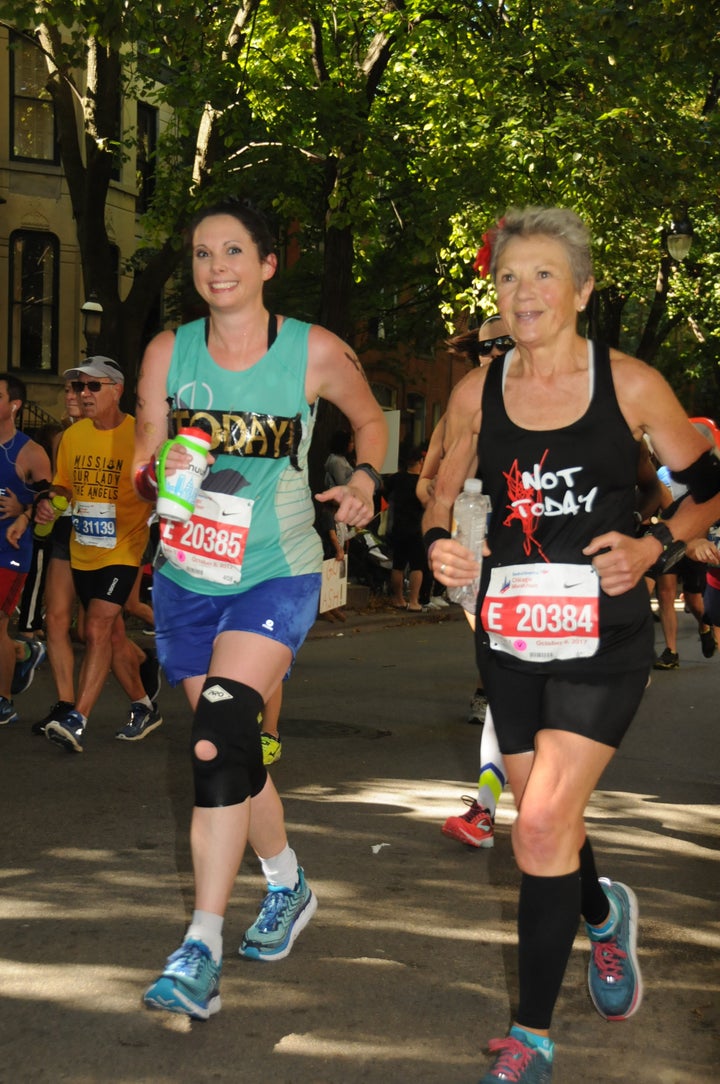 “I am so grateful that we have something to share that we will always have,” said Herron. “It’s not so much about the [finish] time, it’s more about the experience of just being together and getting across the finish line. But really, it’s about eating pizza and candy afterwards,” said Herron.

Their post-race ritual includes a pit stop at Walgreens where they purchase a sausage and mushroom DiGiorno frozen pizza, an assortment of candy (which usually includes hot tamales and jellybeans), crunchy potato chips and a 12-pack of LaCroix. After showering and in between naps, they eat snacks and watch true crime documentaries for the rest of the afternoon.

In July 2019, their running routine altered significantly. Herron moved to the Jersey Shore to live with her now-fiancé Jonathan Lieberman. Now on opposite sides of the country, the women have discovered creative ways to train together and motivate one other.

“Even from afar, training together definitely inspires me. But I also fell like sometimes I need to tell mom that she needs to stop or slow down or rest and recover,” said Herron.

Nancy, a widow for over two decades, regularly pushes her physical limits. She has completed numerous multi-week treks, including a 323-mile journey from Florence to Assisi to Rome along The Way of St. Francis to celebrate turning 69. This fall, Nancy plans to tackle a goal which took her 40 years to achieve: running the Boston Marathon.

“I never thought this would be possible, it’s been in my mind forever. Isn’t [Boston] every runner’s goal?” said Nancy, who qualified for the race with 28 minutes to spare at the Blooms to Brews Marathon in April 2019.

Herron and Lieberman, who have helped Nancy train from afar, plan to be part of Nancy’s race day experience, too. “I’m preemptively so proud of her. She’s been a total beast in her running, and it’s phenomenal to be part of and to witness,” said Herron. “I’ll be at mile 24 with a donut for her on the sidelines.” 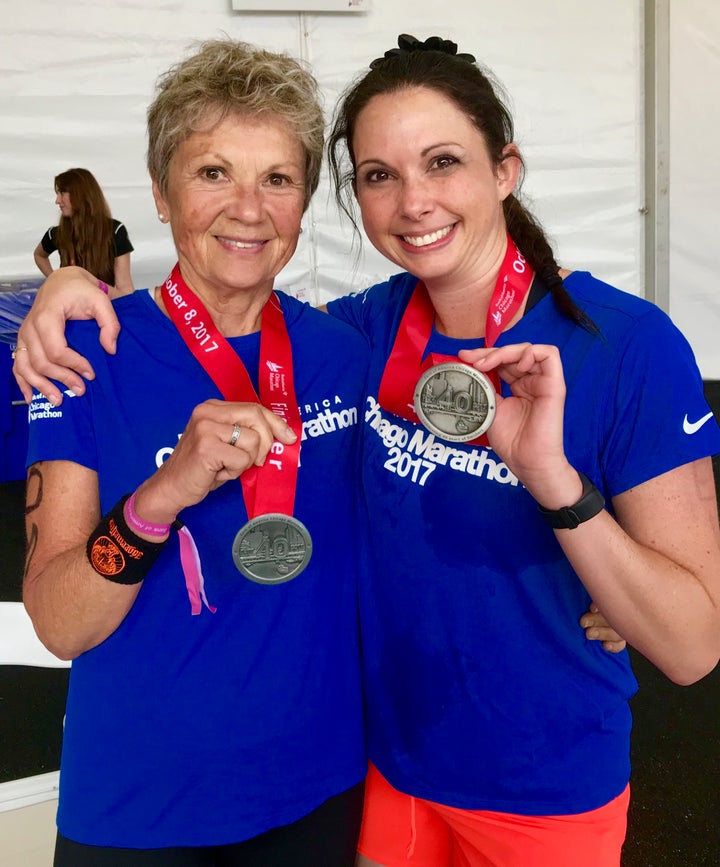 With her other 2020 races canceled due to the novel coronavirus, Nancy maintains sole focus on the Boston Marathon. Meanwhile, Herron has taken a step back from marathon training to concentrate on wedding preparations. Scheduled for this fall, her wedding will be a virtual ceremony (broadcast via Zoom) with only both moms attending in person.

“Now we can invite all our people from both coasts to attend safely,” said Herron. “Since the first year of our relationship was long-distance, we think this is the perfect ceremony for us.”

And while looking toward the future, Herron and Nancy also remember the past and the generations of strong women in their family. Nancy’s grandmother, who died when she was in the fourth grade, made a particularly profound impression on her. Though a young girl, Nancy noticed something about her grandmother that was unique.

“She did a lot of things that women weren’t doing back then. She ran a bar, was a great baseball fan, traveled, wore pants and had short hair. She was a tough and independent woman, but still very feminine when she needed to be,” said Nancy. “Kelly is her great grandmother. She would have loved this; she would be right here with us.”