Sara Germano of the Wall Street Journal tweeted some words from the Vice President of popular brand New Balance, which outraged some anti-Donald Trump viewers interpreted as support for the recent president elect.

Trump opposes the Trans Pacific Partnership (TPP), as does Boston-based New Balance, one of the only shoe brands that manufactures their product in the United States at one of their five New England-based factories. TPP slashes taxes on imports, making it easy for companies to manufacture outside of the United States. Although the comments from New Balance were made in reference to their opinion on TPP, they cite Trump as “going to move in the right direction,” stirring up more negative noise.

Many angry NB customers displayed their outrage by lighting their sneakers on fire, throwing them out and tweeting their NSFW thoughts at the company.

The quick-to-go-viral tweet was clarified later in the morning by the company, saying that in the context of trade, it is an accurate statement.

“‘As the only major company that still makes athletic shoes in the United States, New Balance has a unique perspective on trade and trade policy in that we want to make more shoes in the United States, not less,’ the statement reads. ‘New Balance publicly supported the trade positions of Hillary Clinton, Bernie Sanders, and Donald Trump prior to election day that focused on American manufacturing job creation and we continue to support them today,'” cited Solecollector.com.

They also posted a follow-up message on their social accounts to reassure people they are for the people (and still one of our favorite shoe brands): 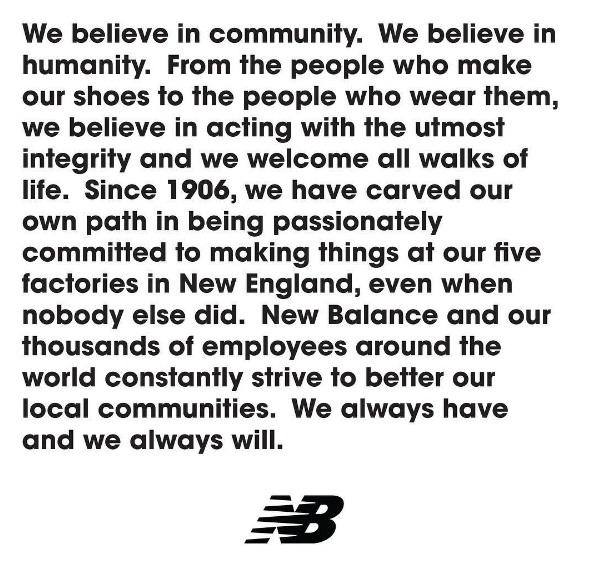 If you are considering lighting a torch to those shoes, some people are calling for donating the sneakers to those in need, which is considered a more peaceful, humane approach to still display your opinion but also help a fellow human.