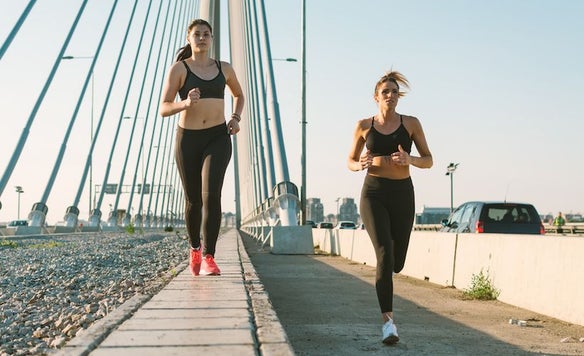 We have all been either the victim or the culprit of scaring the crap out of someone while trying to pass on a run. I know what you’re thinking: That’s why we yell out “On your left!” as a warning. Well, yes–but that can be just as startling. Imagine you’re walking peacefully along a road or path…and then you suddenly hear screaming coming from behind you. You probably don’t even have time to register the words themselves, only the sound–and it’s disturbing.

Related: Proper Etiquette For Passing A Runner During A Race

The other issue with yelling “on your left” is that people tend to move to the left as if you’re issuing a command rather than a warning.

Since the general public seems to be particularly annoyed with runners these days, let’s see if we can’t soften our relationship by not scaring people half to death when passing from behind.

It sounds weird, but trust me: I’ve used this method and it works. Sometimes I’m already breathing heavy if I’m doing speedwork or pushing up a hill so I don’t even have to fake it, which makes this much less strange. The point is to make some kind of human noise, other than your voice, to warn the unsuspecting walker that they are not alone.

See above. If you can’t (or don’t want to) fake loud breathing and you’re not already doing it, try the loud cough. It works just as well and is less awkward if you’re jogging at a leisurely pace.

If it’s safe and you have plenty of room, consider crossing the street or path well before you come up behind someone. This works particularly well if the person you are passing has a dog. By creating as much distance as possible, you’re making it safer and less disturbing for everyone.

If you have the luxury, run on a day or at a time when you know your route will be the least crowded so that you can avoid this messy business altogether.

Run with your dog. Our four-legged partners make plenty of noise on approach. Between their loud panting, four paws with 20 nails clicking the ground and a good set of collar tags, people will know you’re coming from a mile away.

All The Thoughts Swirling In My Head When I Run

A Reminder That It’s Okay To Look Like A Beginner

Passing At The Finish Line: Fair Or Foul?

5 Things I Wish I Knew Before My First Ultra