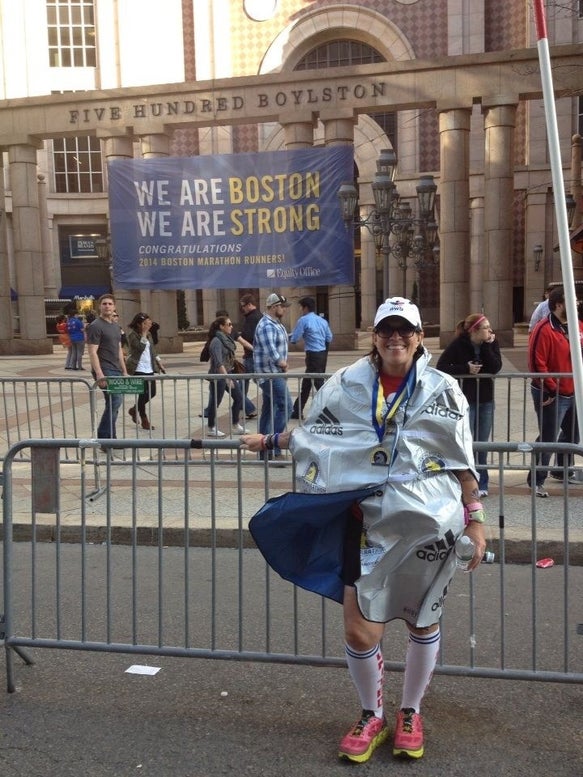 On Monday, April 18, Rhonda Foulds will lace up her running shoes and toe the starting line of her 10th marathon in 2016. This year’s Boston Marathon will be her third time running the world’s oldest annual marathon, and her 35th marathon since 2012.

It is hard to believe that the 52-year-old runner from Justin, Texas, has been living with Parkinson’s disease for nearly 20 years, but Rhonda proves on a daily basis that Parkinson’s is not the death sentence many believe it to be.

In 1999, Rhonda was in her 30s and running regularly. She was training for her first marathon when a tremor in her finger led to a Parkinson’s disease diagnosis. Parkinson’s is a disorder of the central nervous system that affects movement—making running, and living an active life, difficult.

Life after her diagnosis

After her diagnosis, Rhonda stopped running and working out, and was eventually forced to rely on a wheelchair to get around. She began to believe that was the way her life would be, until her doctor told her about a surgery that may help alleviate her Parkinson’s symptoms. In 2004, Rhonda had two deep brain stimulators implanted, and almost immediately she was able to walk again.

Rhonda made walking a regular part of her routine, but it wasn’t until 2009 that she tried running again. She was on a walk with one of her sons who was home on leave from the Marines, when he challenged her to try to run from one light pole to another one 100 yards down the road. It was a short distance, but something clicked in her that day and Rhonda has run almost daily ever since.

In 2012, Rhonda was selected as one of 25 Medtronic Global Heroes. Global Heroes are runners with implanted medical devices who continue to pursue their passion for running, and serve as inspiration to others. As a team, they run the Medtronic Twin Cities Marathon or Medtronic TC 10 Mile. They demonstrate that chronic disease does not mean an end to an active lifestyle. Global Heroes is a cooperative effort between Twin Cities in Motion and the Medtronic Foundation.

The 2012 Twin Cities Marathon was Rhonda’s second marathon. Since then, Rhonda hasn’t allowed Parkinson’s to slow her down—instead she has picked up the pace, running thirty-five marathons in the last four years, and running in the Boston Marathon twice.

The year of the bombings was the first time Rhonda ran the Boston Marathon. She was almost to the mile marker 24 when the bombs went off. Rhonda was among the 3,000 people who were stopped before they could finish the race, and it wasn’t until two hours after the bombings that Rhonda was able to reach her husband, who had been waiting for her at the finish line.

Determined to run the full course, Rhonda returned to Boston in 2014.

An emotional return
“It was amazing. After I passed the point where I had been stopped in 2013, I cried the rest of the way. Getting to run beyond mile 24 was an incredible feeling,” Rhonda said. This year Rhonda will run the Boston Marathon in the mobility impaired category.

Rhonda’s passion for running extends beyond the pavement. She works with the National Parkinson’s Foundation to raise money and awareness of the benefits of exercise for people with Parkinson’s Disease.

She knows not everyone is able to or wants to run marathons, but she hopes that by sharing her story, she can help people with Parkinson’s better understand the disease and how to manage it, and inspire others with health conditions to not give up their passion for life.

“Not everyone who has Parkinson’s is going to be able to run marathons, but whatever your passion is, whatever your capacity is, strive for it.”

Cheer on Rhonda by visiting the Global Heroes Facebook page. Applications for the 2016 Medtronic Global Heroes team are now open—you can apply here.

“I’d Like to Think of Parkinson’s as My Superpower”