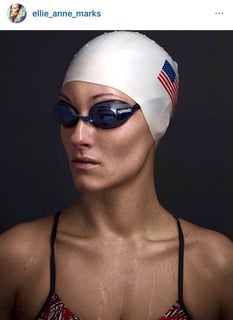 The 2016 Paralympic Team Trials have come and gone, and our U.S. teams are on their way to Rio for the September games. Sgt. Elizabeth Marks, in addition to being chosen for the U.S. Paralympic swim team, was also awarded the Pat Tillman Award at the 2016 ESPY awards.

“The Pat Tillman Award for Service honors those individuals who inspire us with their service and selflessness,” said Connor Schell, senior vice president of ESPN Films and Original Entertainment, in an interview with ESPN Media Zone. “Sgt. Elizabeth Marks—this year’s recipient—is an athlete of remarkable courage and perseverance who has made extraordinary sacrifices in her own life to help others and serve our country.”

Twenty-five-year-old Sgt. Elizabeth Marks brutally injured both her hips while on deployment in Iraq as a combat medic. After many painful surgeries, Marks, with a fire in her belly and passion in her heart to return to serving her country, eventually became a world-class para-swimmer. Marks is ranked number one in the world with her 100-meter breaststroke and won four gold medals this year at the Invictus Games, Prince Harry’s international sporting competition for Para-athletes.

At the Invictus Games in 2014, Marks fell ill with a life-threatening respiratory infection. Marks was immediately hospitalized and the nurses in London’s Papworth Hospital ended up saving her life. As a thank thank you, Marks gave one of her medals she won in this year’s games to Prince Harry, asking he deliver it to the doctors and nurses at Papworth Hospital. The Prince fulfilled Marks request last month.

Though her legs are still injured, swimming has given Marks a renewed purpose and has allowed her to rebuild her strength both physically and mentally. “She represents the best of our country and we are proud to present her with this award,” said Schell.

The Pat Tillman award was created in honor of Pat Tillman who shelved his NFL career with the Arizona Cardinals to serve his country. Family and friends established the Pat Tillman Foundation following his death in 2004 while serving in Afghanistan.

“Pat lived his life with passion, intensity and a commitment to help others live up to their potential,” said Marie Tillman, president and co-founder of the Pat Tillman Foundation. “As a combat medic and now world-class paraswimmer, Sgt. Marks embodies the same strong sense of duty – challenging herself, fellow soldiers and her teammates, physically and mentally, to push limits and achieve their best in spite of injury or other setbacks.”

Sgt. Marks will get the chance to inspire the world as we watch her fierce strength and passion swim into the hearts of all those watching the Paralympic games in September. We honor Sgt. Marks and all those who have served and inspire us everyday to beat the odds.