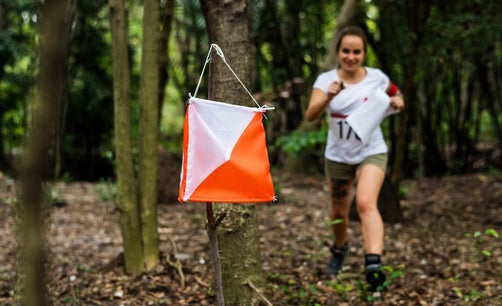 While normally an avid 50Ker, this year I’ve found myself in a funk, unmotivated to train during the cold, gray Michigan winter. I started looking for ways to spice up my running routine, including trying out some new fitness classes and adding in some weight lighting, neither of which wound up scratching that running itch or reinvigorating my training plan. I started to look at other races, hoping something would catch my eye and help me get back on track. Having tried a short adventure race that involved some map and compass work as part of a team, I tried finding a race like it during the winter, only to come up shorthanded due to my status as a solo runner. This led me back to a sport that had been in the back of my mind for quite some time: orienteering.

According to Orienteering USA, “Orienteering is a navigation race—often held in unfamiliar terrain—using a map and compass.” Unlike mud runs and obstacle course races, which grew in popularity from 2009 to 2013, orienteering doesn’t feature large, splashy events with famous bands, nor are there (that I’ve been able to find) organized series across the country like the Color Run or the Warrior Dash. Orienteering races offer several categories, including those designed for solo runners and teams (in different gender configurations) and come in different types of formats at different distances.

Looking for a challenge and interested in exploring orienteering, I decided to give it a try after an ad for a race called the Nain Rouge Gaine came across my Facebook feed. The “Nain Rouge” part of the name comes from the legendary creature in the Detroit area (which is basically Detroit’s version of the Jersey Devil, a fact that appealed to the Jersey girl in me). The “gaine” part of the name refers to its certain flavor of orienteering: a rogaine, or a long-distance race. Orienteering USA describes the object of rogaines, which require navigating preplanned routes, as “[scoring] points by finding these checkpoints located on the course within a specified time. Checkpoints may be visited in any order and are worth various points depending on their difficulty and location.” These checkpoints are identified by a three-sided orange and white marker, and to prove that you have made it to the checkpoint, you must record a punch, either using a manual punching device or an electronic one that records your location.

As someone who was unfamiliar with orienteering, preparing for the race was one of my favorite parts. I relied upon Orienteering USA to learn some of the orienteering lingo, read the Be Expert with Map and Compass manual to familiarize myself with map reading and compass use and watched videos on YouTube to learn more about planning a mapped route. I also spent the day before the race in a local nature center, using a map and compass to practice moving between different features at the center.

Orienteering races require some gear preparation. Race directors will usually tell participants what to bring, but the list typically includes an emergency blanket, whistle, compass and map, which is provided. Additional required gear for other races might include illumination (lights or flashlights), hydration systems and ways to carry food and additional items. Unlike traditional trail and road races, there may not be aid stations, so you will need to bring food and water with you. After my experience, I would suggest the following additions: contact paper (to laminate your map), clear tape (to tape map parts together if you receive multiple maps), pencils and markers to outline your route, scrap paper for making notes and a small ruler for measuring distances. I also packed several items (e.g. antacids and extra toilet paper) that I use for ultramarathons.

The morning of the race, I checked in and received my map with the marked checkpoints, as well as a list of control descriptions. I sat down with a cup of coffee, my maps, my compass and a pen to plan a route, but it felt like the moment in a difficult class when there’s a test in front of you and you know none of the answers. The slightly overwhelming route for the day consisted of two maps (one east and one west) and 36 controls. After an initial panic, I talked to other participants around me about map symbols I wasn’t familiar with and was introduced to the idea of planning time checks and multiple routes based on how much time I had to get to the finish. I took a few breaths and planned a route that would let me use my sprinting abilities, hit some high-value checkpoints and attempt checkpoints in different terrain.

For my first control of the course, I picked one that involved some road and trail running that finished at the bottom of a hill–a control I thought would be easy. Though I reached the control and punched in, my inexperience showed as other participants skirted the base of the hill while I was left climbing. All along the eight-hour course, there were several moments like this one, all offering opportunities for me to learn and adapt. As the day went on and I gained confidence with orienteering, I found myself able to make quick decisions and attempt controls I had originally felt hesitant to try.

I found that I enjoyed the intellectual challenge of route planning and compass work combined with the physical challenges of running and hiking. This definitely reinvigorated my running and has sparked an interest in continuing to try other orienteering events. Secretly, my competitive side wanted to finish the race mid-pack. When final scores were posted, I learned that I’d placed fifth out of 10 solo females, happy to have met my goals!

For those interested in learning more about orienteering, there are several resources you can use to prepare.

Check for orienteering clubs or organizations in your area that might offer introductory classes or races. Those interested can also check with stores like REI, which offers basic map and compass navigation classes.

Test Your Limits With An Unsupported Adventure Run