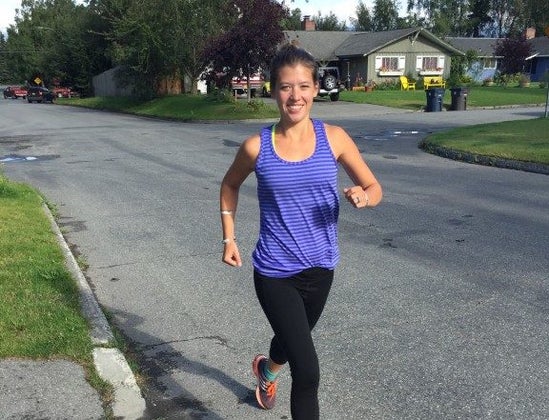 Excerpted from The Inner Runner, one athlete’s story of battling cystic fibrous will remind you why we run.

In Anchorage, Alaska, 28-year-old Sabrina Walker heads out the door to run. It’s cold outside, as any runner in Alaska would expect it to be—about 20 degrees Fahrenheit on this day. A powdery snow covers the ground. As she takes her first few steps, her breathing is noticeably loud. She has a chronic wet cough and it sometimes sounds like she’s wheezing, as if she has a bad chest cold or pneumonia. It usually takes her about five to 10 minutes to catch her breath and find a breathing rhythm that helps her run. People often glance at her because she sounds very winded.

“They probably think I should take a walking break,” she jokes.

RELATED: Being A Runner With A Stupid Autoimmune Disease

Despite the coughing and wheezing, she prefers running in colder temperatures rather than hot ones, but if it’s colder than 15 degrees outside, she runs indoors at the gym. “I’ve grown up in Alaska, so the cold is something that I’ve adjusted to,” she says. “Our bodies are very adaptable and I find my lungs feel so much clearer after a run in the cold.” Sabrina often comments on how her lungs feel. Her awareness of them is unlike that of other runners. There have been times when she has coughed up blood after a run.

When Sabrina was 4 years old and began kindergarten, her parents realized how small she was compared to her classmates. Being one-quarter Tlingit Indian, they took her to the Indian Health Services Hospital in Alaska. Doctors couldn’t find anything wrong with her. After months of testing, and on the suggestion of a doctor from outside the hospital, she was diagnosed with cystic fibrosis, a life-threatening genetic lung and digestive system disease affecting 30,000 people in the United States and 70,000 people worldwide. Sabrina was born with a defective gene that causes her body to produce unusually thick, sticky mucus that clogs her lungs and leads to life-threatening lung infections. The mucus also obstructs her pancreas and prevents enzymes from breaking down food, which leads to poor absorption of vital nutrients.

Sabrina started running when she was 12 years old. Her father, an elementary school physical education teacher, always wanted Sabrina to participate in sports. Her mother believed that running could be used as a way to clear her lungs of all that mucus. So she took Sabrina to a local track and set a goal for her to run for 10 minutes. She ran with her daughter. “We learned that running helped me to loosen the thick mucus from my lungs and cough it out,” Sabrina says. Motivation from her parents led her to compete in middle school and high school cross country and track and field.

When Sabrina was a senior in high school, she started to have lower back pain. Given her age and athletic history of running cross country and track, her doctor thought that she had pulled a muscle. But the pain didn’t go away and eventually got worse. “I started to feel shooting pains down my legs and my right foot was losing feeling,” she remembers.

After graduating from high school and desperate for help, she went back to the doctor. This time, the diagnosis was very different: a malignant tumor on her spine—non-Hodgkin’s lymphoma. She underwent a month of radiation and three days of chemotherapy treatment every three weeks for four months. She got pneumonia after her first chemo session because her body was so weak. She was also allergic to one of the chemotherapy drugs, so it had to be administered very slowly over the course of two days with lots of Benadryl. But it worked. Sabrina has been in remission for nine years. And she still runs in the Alaska cold.

Breathing with cystic fibrosis is like breathing through a straw. The airways in the lungs become inflamed and can be blocked from very thick and sticky mucus. Over time, the lungs create scar tissue from fighting infections, rendering parts of the lung unable to function normally. Only 81 percent of Sabrina Walker’s lungs function properly.

“I learned to run and cough at the same time—and sometimes pee my shorts in the process!—in order to clear my lungs of the mucus building up,” she says. “When I clear my lungs, I can get more air in my airways. The effort to rid my lungs of the mucus is a daily task that never ends.” Those times she coughs up blood after a run means that she’s fighting an infection and that she worked her lungs too hard.

Running is not just something Sabrina likes to do; it’s actually part of her medical routine. It enables her to cough up mucus that harbors bacteria and causes lung infections. “There is no better way to physically work my lungs like running,” she says. “I feel that running keeps my lungs, mind, and body healthy. Running holds me accountable for my own health.”

With a degree in elementary education from the University of Colorado–Denver, she had to make a tough decision to set teaching aside so she wouldn’t risk lung infection from being around kids. She married her high school sweetheart and, despite being told that she may be infertile from the chemotherapy, radiation and cystic fibrosis, she and her husband had their first child in March 2015.

To date, Sabrina has run more than 10 half marathons, three 16-mile mountain trail runs, and many 10Ks and 5Ks. Her next goal is to run a marathon. When asked what running has enabled her to do that she couldn’t have done otherwise, she reels off a list of things that would make any healthy runner take a step back and realize just how lucky he or she is.

“Running has let me live life instead of grasp for it. It has helped me to stay active and fit, and has kept me healthy enough to pursue higher education, get married, dream about my future, and conceive and carry a child despite all the odds of not being able to do so. Running has kept me off of the lung transplant list and out of the hospital for the last four years. It has provided me the opportunity to be hopeful for a cure for cystic fibrosis in my lifetime.”

Despite her health issues, Sabrina knows she’s lucky too. “Not everyone has the capability to run,” she acknowledges. “Cystic fibrosis and cancer are not excuses to keep me from running; they will continue to fuel the fire that inspires me to run. Running is a way to keep my soul, lungs, and body happy. I have the ability to run and I will continue to do so until it is not possible. Running keeps me alive.”

To order a signed copy of The Inner Runner, go to run-fit.com/books.