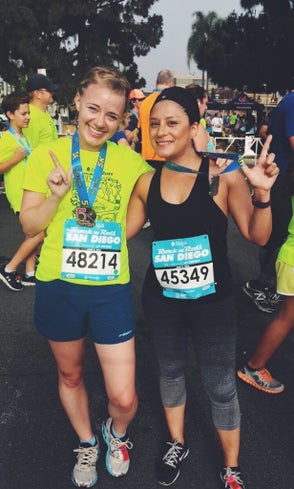 I had never run a 5K before, at least not competitively. The only “competitive” races I had ever done were for track and field days in grade school gym class, as well as the occasional non-competitive races for good causes with my families. I would not consider myself an experienced or fast runner. Though I love to run, my asthma has always been a divider stick in my life. “Okay, Victoria. You can go this far and that’s it,” I’ve been told. It’s not exactly the kind of encouragement a girl likes to hear day in and day out; You can only go this far. That’s it.

When my editor, Nicki, at Women’s Running suggested I run in the Suja Rock ‘n’ Roll San Diego 5K, I was only slightly apprehensive. Being married and in school kept me extremely busy, so I hadn’t worked out in months and hadn’t gone for more than a mile run in nearly a year.

I am a journalist after all; we have to be willing to do anything. However, it wasn’t my willingness to do anything that got me to race day; it was the vast numbers of people around me supporting me the whole way. When I told my friends and family about my signing up to run a 5K, I was expecting them to squint and ask if I was sure about that. Again, I hadn’t seriously worked out in a year—a year. However, the response I got was much different. “That’s a great idea!” was the overall response. “You’ll do so great!” I signed up to run with a coworker from the office and after doing a practice run with Nicki and her, they told me that I was actually pretty fast (that was a shock) and would do fine. I was being doused with reinforcement left and right.

When race day came, my husband was on the sidelines cheering me on, while my coworker was running next to me, yelling for me to “Go farther!” and “Go longer!” But the start of the race was tough; I felt short of breath and ready to quit and just walk. Then I saw a father with two sons holding up two different signs. The first sign said “You go!” and the second said “You go too!” These kids were cheering and giving high-fives to any runner who passed by. I ran ahead and high-fived the youngest, and I knew I had to keep going and get over that initial hump. About five to 10 minutes in, I was over the hump and on a runner’s high. We only stopped once in the whole 3 miles to tie shoes and adjust gear, and after crossing the finish line I actually felt like I could have run another mile.

Soaked with sweat, face burning, I stopped behind a crowd, where a Rock ‘n’ Roll employee handed us our medals. My husband called to me from behind the fence and said, “You did it! Congratulations!” Since the race, I have talked to my husband about running more 5Ks and even some 10Ks. 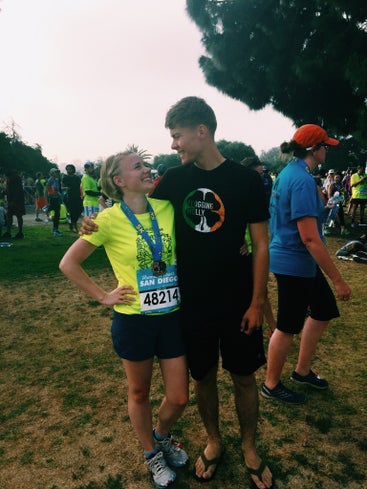 Running the 5K at Rock ‘n’ Roll San Diego changed my view drastically on what I could and could not do. There’s a huge strength in numbers. When you have people cheering you on, not just during a race but in life as well, there’s nothing you can’t do. You just have to take that divider stick, chuck it aside and say, “No! I can go farther!” and then run like the wind.