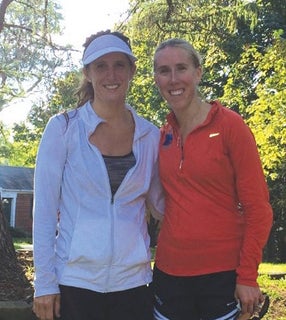 From training partners to best friends…

Theresa Ferguson didn’t think she had time to train for a marathon. With a career as a public relations consultant and six daughters at home, Ferguson wasn’t sure she could balance it all. But her perspective changed after meeting Kate DeProsperis.

The two connected in 2013 through Saucony’s 26Strong program, which pairs veteran runners with newbies to train for a marathon together. DeProsperis, a 2012 U.S. Olympic Marathon Trials qualifier, knew Ferguson had great potential. The elite runner helped the then 43-year-old mom not only complete a 26.2-mile race, but also smash her original goal of 4:30 with a 3:57 finish at the Naperville Marathon.

Instead of parting ways after the program, Ferguson and DeProsperis stayed close, shopping together, meeting for coffee or relaxing with a glass of wine.

“It is because of Kate’s mentoring and encouragement that I have progressively evolved from a 10-minute-miler three years ago to running a 5K at a 7:30-mile pace,” Ferguson says. “Even though she juggles work, training for her own races, coaching through the Chicago Area Runners Association and taking care of her own growing family [she’s about to have her second child], Kate has so generously helped me prepare for each of my subsequent races.”

Last year, DeProsperis coached Ferguson to a 1:46 half-marathon finish, her first and fastest 13.1-miler. Although Ferguson hasn’t run another 26.2 since her first in 2013, she hopes to do another soon and qualify for Boston—with help from DeProsperis, of course.