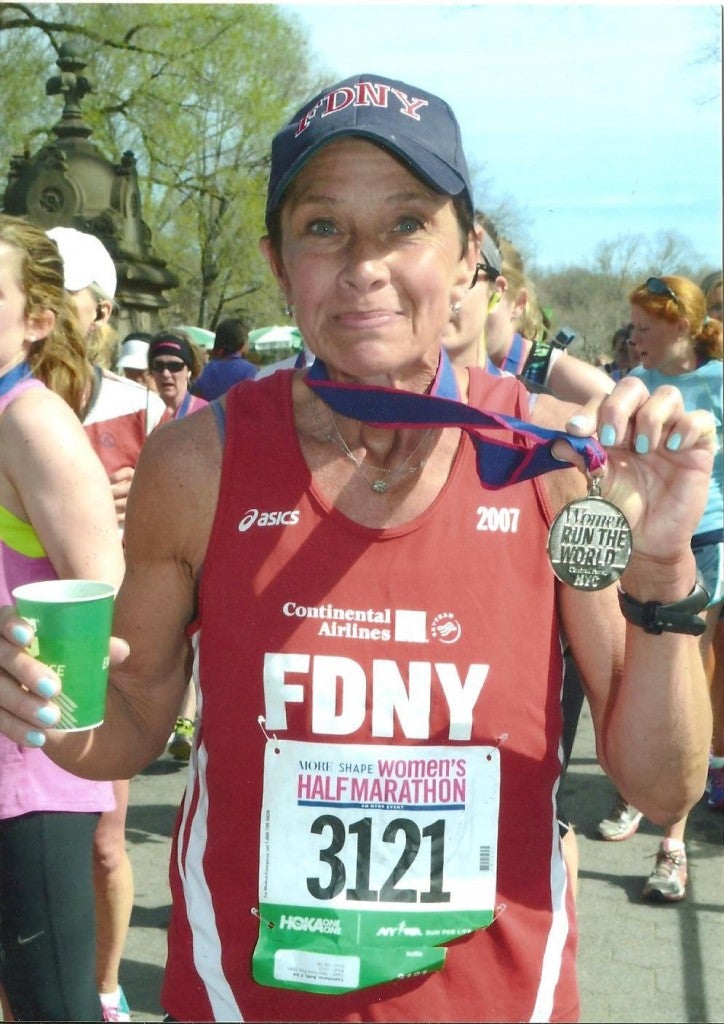 It happened March 15, 2015. No not the stroke, which rocked my very organized and well-run life. It was the accomplishment of running the New York City Half Marathon. It had a surprise ending—happy and elated, to say the least. Let me take you on a little journey from start to finish. The finish is only the beginning of it all.

On May 4 last year, I woke up, dragged myself out of bed—but then all I remember was the family called 911. I remember there were paramedics in my room. After arriving at the hospital, I learned I had had a full-blown stroke. If I were unhealthy, I wouldn’t have been as surprised. But that was not the case. I was the picture of health so much so that my family and friends could not believe it to be true.

I taught pre-school by day and spin, strength and resistance classes by night. I ran daily and had 11 consecutive NYC marathons under my belt (sans Super Storm Sandy). This was totally out of the blue. No one was more surprised than me, and I can’t say I comprehended it all right away. When Dr. Pandya told me that I was going to be okay, I cried tears of joy. Therapists were helping me walk around the hallways at that time, and I guess family members who saw me were still worried about my outcome. But I wasn’t. I instinctively knew I was going to be fine. Not because I had a quest or uphill battle to accomplish. I just felt it was a natural progression—but I truly had no idea what having a stroke meant.

Related: I Beat My Body’s Barriers To The Finish Line

Being naïve has its upsides. I was out of the hospital five days later and headed for rehabilitation. I spent the next eight days with occupational, speech and physical therapists, all working to get me ready for outpatient rehab. I took it upon myself to walk the halls as well as do some leg exercises on my own. This was only the beginning. Then the work was to really commence.

Over the course of the first few weeks home, I started running slowly, but with some difficulty because my right side was majority affected. My leg and arm on that side were weak, and I didn’t have full range of motion. But I made the best of it and kept on pushing. One night I was out for a walk, and I had a dizzy spell. I panicked and by the time I got home I was scared that I would have another stroke. After that incident and a few others, I decided to address the mental side of recovery as well as the physical. I called a psychologist and nurse practitioner, and with his help, I learned it could possibly take a year or two to recover and feel little to no side effects after the stroke. I thought, No way, not me.

As the summer was coming to a close, I was getting ready to return to work. I had been shaky the last month leading up after the stroke; I thought it was just because I was only a month into this whole recovery thing. It was hard to act “normal”; I would have issues multi-tasking and fumble my words. After summer break, slowly things turned around. As November approached, I was contemplating running my 12th New York City Marathon like I did consecutively the past 11 years. I had my admittance and was running at least a half by this point. As the time approached, I thought I would decide that week and wait until the very last moment. In the end, I opted to skip my first marathon in years, which was a very tough decision.

Related: How Do You Bounce Back After A Bad Race?

Soon after that, the holidays were upon us. I shopped and cooked for Thanksgiving. I wrapped and made homemade Christmas cards, which were hilarious. I didn’t want this year to be any different, but what made it difficult was that I still wasn’t driving myself without someone with me. I wasn’t comfortable with it yet. My mother was with me everywhere I went, but we had a great time.

Then came New Year’s Day 2015, and new things were about to happen. I could now see what the doctor meant about a stroke taking a couple years to fully rehab. It was at this time that I entered the New York City Half Marathon and geared up for my usual 2-hour-plus runs on the weekends.

As the day approached I was a bit nervous. I knew I could do it, but the course was a new experience for me. After the gun went off, we were up and over the hills and headed down and out of the Central Park, on to Broadway. We hit the loudest crowds in Times Square. It was truly special—they only close Times Square for New Year’s Eve and the NYC Half. We ran along one of the busiest and most famous streets in the world. I felt invigorated.

When I saw the Houston River up ahead, I knew I would be making the left turn onto the 12th Avenue. This was a concrete road so there was no give to the pavement and the days to follow would be felt in the hips. I reached a point where I really had to use a bathroom and luckily there was one by a medical tent with no line. Then it was full speed to the finish!

I sprinted over the finish line—I did it! I walked through the finish and I noticed someone there. It was Mary Wittenberg, former CEO of New York Road Runners. I shook her hand, and she offered her congratulations as I walked on by. Then I turned around and walked back up to her: “You know I had a stroke 10 months ago.”

“I’m great!” And I was. My greatest challenge now would be to take the subway for the very first time in my life.

Four weeks later on another Sunday, I ran the More Half Marathon in Central Park. At the end of the race, when I was walking away with my mylar draped around me, a woman who also ran asked, “How did you do?”

“I did my second best time,” I replied. I learned her father had a stroke too, but he passed away—and was just two years older than me. That truly showed me how lucky I am and that all the ups and downs are just part of the journey.

The Step I Took That Changed My Life Forever