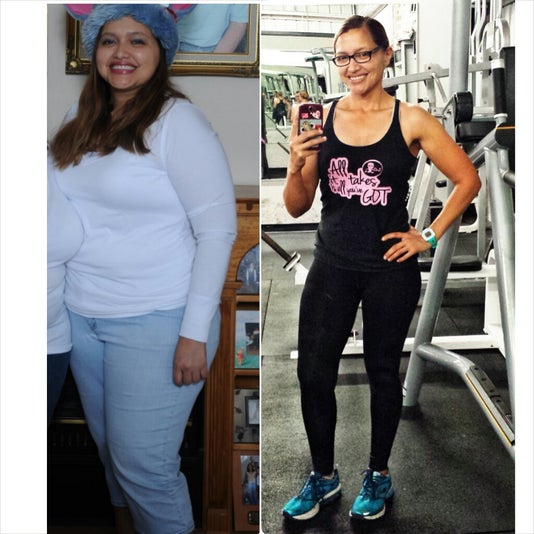 On January 21, 2013, I took my 3-year-old son on a glass bottom boat tour to see coral reefs off the coast of Florida. We wore matching shirts and I had someone on board take a photo of us. After the trip, I wanted to post the photo on social media but I couldn’t. No matter how I cropped it or what filter I used, I couldn’t make myself look decent. I went to bed that night feeling ugly and embarrassed. The following morning, I woke up and said, “Enough is enough”; I made a promise to myself to make the change.

I was working overnights as a valet so that’s where I began to research how to change my life. I looked up ways to eat healthy and recipes I could try. Healthy eating was something I had never done; I had to teach myself everything. I also began walking laps around my garage. I knew I had to start somewhere and I was motivated to begin moving more. My next step was to join a gym and start exercising. I had no idea what to do at the gym, so I began researching the exercises I needed to do in order to lose weight. Once I had all the tools I needed to get started, I made my first goal: I wanted to lose 31 pounds by my 31st birthday. I had about two months to do it and dedicated all my free time to this goal. I set up a strict eating schedule that allowed me to eat small portions more often throughout the day. I began some meal replacements with protein supplements. I scheduled my sleep so that I had time to go to the gym every day and get in my exercise. At first, all these changes were so difficult, sometimes overwhelming, but my eyes were set on meeting my goals so I kept pushing through.

By the time my 31st birthday rolled around, I had lost 34 pounds. I loved how I felt and decided to continue what I was doing. For the next nine months, I continued to find new ways to reach my goal of being healthy and fit. I struggled at times, sometimes because of temptation, exhaustion or that ever-daunting plateau. That’s when I relied on my family and friends. My support system made all the difference in my journey. When I was feeling lazy they pushed me. When I was frustrated, they reminded me of the big picture. They helped me see that the hard times are the turning points that push me to the next level. After eleven months of hard work, I realized my goal of being healthy and fit—I had lost a total of 106 pounds. I would not have had any of this success without my family and friends support.

Near the end of my weight-loss journey, I discovered what would become my new passion: running. Cardio is an essential part of weight loss and fitness, but for me it became more than that. It is a sport that you can always improve on, whether it is distance, time or enjoyment. I started small and worked my way up mile by mile. After a few months, I was registered for my first 5K and then a half marathon. With every run, I became stronger, more passionate and determined. Now I can go at most one day without running. It’s been a little over a year since I became a runner and I have competed in a total of seven races: three 5Ks, one 10K, two half marathons, and one full marathon.  I have trained hard and pushed myself to improve my time in each race. I am currently training to run the New York Marathon!  The peace and joy that running brings me is unlike anything I have ever felt before. I hope to be able to continue running for many years to come.