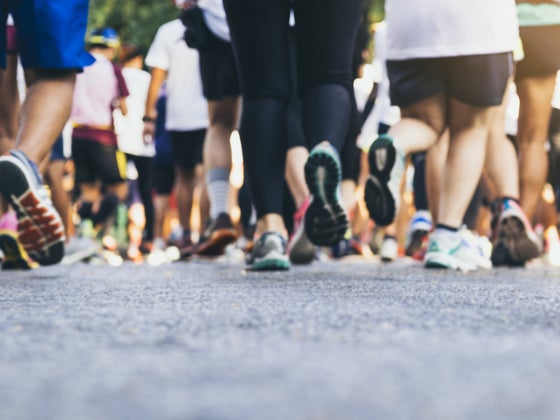 The life cycle of a runner goes something like this: When you run your first 5K, everyone asks when you’re going to race a 10K. After you finish your first half marathon, the question becomes if you plan to put a full marathon on your calendar. The pressure is often self-imposed as well. In the culture of recreational running, longer is considered better. To put it bluntly: “Serious runners” are always trying to run farther.

I recently realized that for a long time I have subscribed to this school of thought. About a year ago, due to chronic back issues, I dialed back my marathon running and have focused exclusively on halfs. While racing should be a source of pride, the shift has caused me to struggle with some intense feelings of inadequacy.

At a recent race in Idaho, I met up with two of my best running friends, both of whom were running the full 26.2 miles while I did 13.1. After the race, we were standing around with our medals on and someone asked which events we had done. When I responded that I had run the half marathon, the person earnestly tried to lend encouragement: “Oh, well good for you! Are you just starting running? I bet you’ll work your way up to a full marathon one day.”

“Yeah, maybe.” I smiled weakly as memories of the 50 marathons I have run swirled around my mind.

I know objectively that your distance doesn’t define you as a runner—but that’s not enough sometimes to quiet the sadness in my mind that comes from leaving my marathon legacy in the past. While it may be true that no one else really cares what distances I run, it’s become shockingly clear to me that I’ve allowed myself to believe the dangerous and defeating mindset that running farther is always better. It’s time to make a change.

I’m declaring 2017 to be the year of the 5K. Incredibly, I have never actually raced a 5K. I have participated in them—usually with my husband or for something fun to do—but I have no idea what my 5K race pace used to be, should be or is. I don’t do hard sprints. I don’t do 5K-specific speed work. I don’t even know what 5K speed work is! Note to self: Google that.

While bumping down in distance might seem like the opposite of challenging myself, I know that it’s going to be a huge push. Going fast and running outside of my comfort zone is scary. And although I hope this year will bring plenty of shiny new 5K PRs my way, I’m keeping my eye on the ultimate prize: a much needed change in perspective. Here’s to stepping outside the box in the new year!