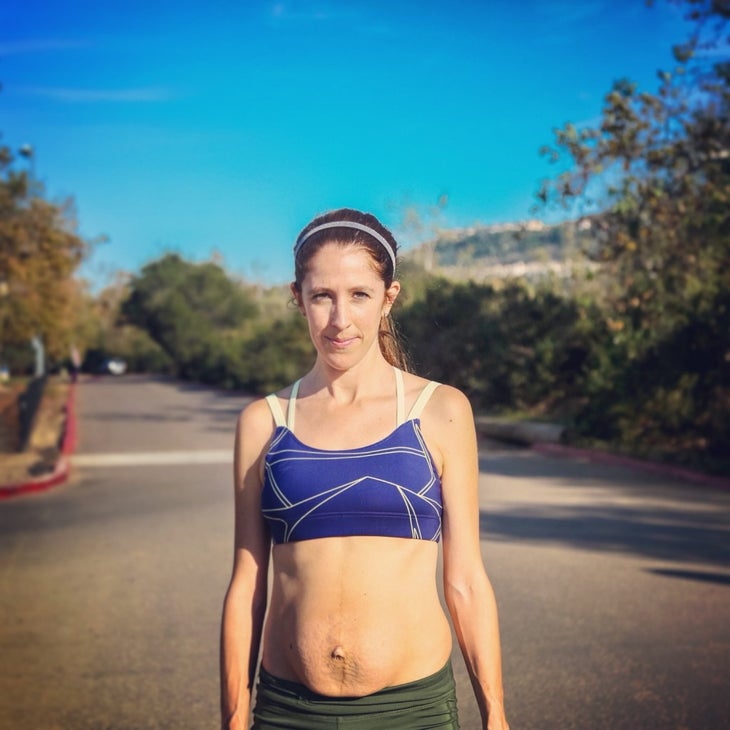 Standing on the starting line, your knees trembling, heart racing, palms sweating, and mouth dry as the Saharan desert. It’s a feeling we as runners know all too well. The nerves that overtake us make us question our reason for putting ourselves in that moment. We wish we were any other place but here. Now imagine you’ve been removed from the realm of racing for what feels like an eternity. Wouldn’t you give just about anything to stand on that starting line, anxiety and all and have a shot at what lies ahead? I would.

I am at the ultimate starting line. I recently gave birth to my second son, Hudson, about a month ago. I ran through most of my pregnancy, stopping at 29 weeks when pressure in my pelvis became too great. My delivery went very well and was much smoother than my first baby (which was only 16 months ago). Those that know me and have followed my journey since joining Oiselle in 2014 know I’m all about transparency. As a professional runner, women and mom I found there was a hole in what was being shared about a woman’s experience training through pregnancy, body changes (boy are there a few) and coming back post-partum. Sure, in six months I could race back on the scene with my old 6-pack abs, crush my PRs, and proceed like the road to get there was easy and came naturally because “that’s how it is for pro runners.” Well that shit ain’t real. The reality is my post-partum body is a hot mess. My abs are shot. I have rolls upon rolls of stretch marks and loose skin, a three-finger gap of diastasis recti, a pelvic floor in need of a medieval chastity belt, boobs that ache on a run no matter how many Verrazano bras I layer on, and my mental game is far from solid. On the days I do feel motivated to get out the door, guilt takes over me for leaving my kids and selfishly wanting to train. I’m juggling many balls with one ready to drop at any moment.
Starting over is scary. The farther removed you become from training and racing, the easier it is to let mind games creep in telling you it’s too hard, the road is too long, you’ll never get back. When I signed with Oiselle in 2014 they took a gamble on me because I had just had my son Riley and hadn’t competed since July 2013. That year was the best in my career having come off a second, third, and fourth place at the US 10K, 15K, and half marathon champs respectively. I also set my half marathon PR of 70:53 at the NYC Half. These results gave me the confidence that I could return to a high level stronger than before post baby.
Four months post-partum I put on my silky Oiselle singlet for the first time and got to prove this is what I was made to do: race. After not much training I ran the Great South 10-miler in 59:06 and was excited for the future. Then I got pregnant (oops) in January, and my singlet would have to collect a little dust for the rest of 2015. We all have a little dust that needs to be brushed off whether coming back from an injury, pregnancy or just a mental hiatus from running. How do we do it? We remain relentless in our pursuit of goals no matter the obstacles. We seek the company of our teammates, sisters in sport. We prioritize our time knowing if you have just 30 minutes of free time, shut your computer, ignore those dishes, and lace up those bad boys. You’ll thank yourself later.
I’m one month post-partum and just embarked on my “true” journey back. I have a long road ahead filled with kegals, core restabilization, Elliptigo rides, slow and painful miles, doubt, pumping sessions pre workouts, four-hour sleep nights and endless cups of coffee. I also have a ton to look forward to: big gains in fitness weekly, watching my baby learn new skills daily, rejoining my teammates for practice, and a new fall and winter wardrobe. I mean look good, feel good, right? I know going ahead balancing two babies, a husband who is also a pro runner, our coaching business, and remembering to brush my hair, maybe even shower once a day, will not be an easy task. Years ago when I dreamt about 2016 and my chances to make the Olympic Team I envisioned a different a path than I’m on now. Not a bad path—just different. Athletically it feels a little like I’m starting over at square one and it’s scary.
My plan for returning to competition is to actually not have a plan. By that I mean be flexible, open-minded, and realize progress often happens with two steps forward and one step backward. I have no races written on my calendar; however there is a big cloud that looms over my head. It’s called the Olympic Trials Marathon, and it’s approaching fast—it’s only five months away. Four years ago after I ran 2:29 at the Houston Marathon; I believed I’d be on the starting line in February with a shot at making the Olympic Team. It’s now uncertain if I’ll even be on that starting line. Do I want to be? Absolutely with all my being. But sometimes you can want something so badly and take all the right steps to get there, but it’s not meant to be. Getting there however is where we learn who we are and what we’re made of. Sometimes it’s not so much the race we’re training for but about our journeys to get to the starting line. It’s about giving ourselves the chance to line up with sweaty palms, quivering legs and stare down the open road ahead which holds so much possibility.