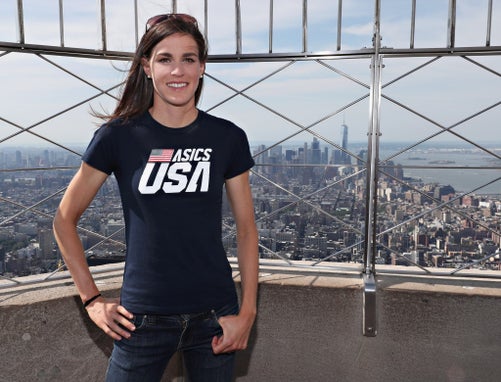 In the triathlon world, 31-year-old Gwen Jorgensen is a big deal—she was the first American to ever win an Olympic gold medal (man or woman) in the triathlon event, which she did in 2016 in Rio. But in the running world, Jorgensen is just starting to make headlines—after winning her gold medal, she ran the New York City Marathon that fall in a time of 2:41:01, placing 14th in her marathon debut against a world-class field.

Not long after New York, she announced that she was pregnant and gave birth to a son in August 2017, then last fall announced that she’d be retiring from triathlon and switching her focus to distance running, with the goal of winning gold in the Olympic marathon in Tokyo in 2020.

Now, next month, we’ll get to see how she fares at the half-marathon distance—she’ll be racing at the 2018 USATF Half Marathon Championships on Sunday, May 6, which is part of the 10th annual DICK’S Sporting Goods Pittsburgh Marathon weekend of events.

“I am very excited to be making my half marathon debut at the USATF Half Marathon Championships,” Jorgensen said in a press release, “and look forward to testing my limits in this new distance.”

Jorgensen, who now trains with the Bowerman Track Club in Portland, Ore., with the likes of 2017 NYC Marathon champ Shalane Flanagan, set a 10,000-meter PR and winning time of 31:55.68 at the Stanford Invitational in March. That race earned her the ranking of ninth in the world.

While the full pro list has yet to be released (it will be later this month), we’re pretty confident the race will draw a top-notch field of pros and tough competition for Jorgensen—this year’s USATF Half Marathon Championships offers an event-record guaranteed prize purse of $85,000, which pays 15 deep per gender (including $15,000 each for the champions).

Jorgensen has made her mark on triathlon, and we’re excited to see how this speedy new mom will influence the running world!

Read more about the race at pittsburghmarathon.com/USATFHalfChampionships. Those interested in race-day updates can download the P3R Events app for free.

Who Is Gwen Jorgensen?

Gwen Jorgensen On Her Surprising Decision To Leave Triathlon