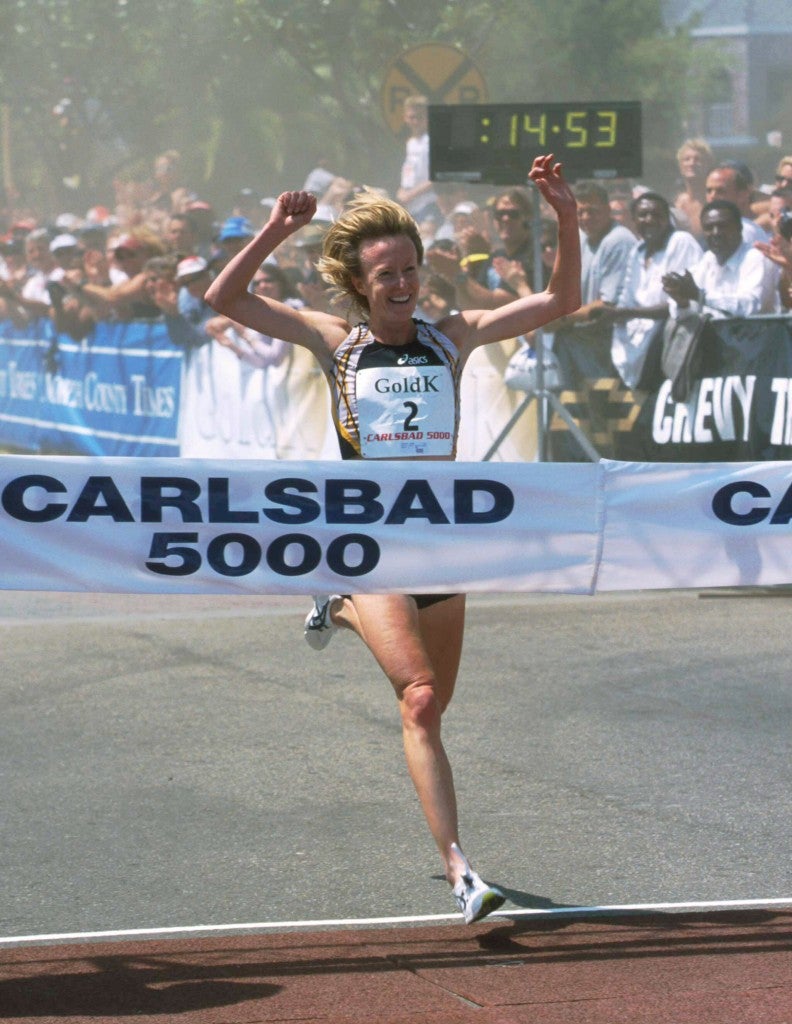 Deena Kastor sits at a window-side table at the swank C Level restaurant on San Diego’s Harbor Island. She brings a shopping bag into the restaurant and orders a shrimp Louie and iced tea. The bag holds flowers and a bottle of red wine. A Kastor factoid: she’s a major foodie. She shows off a cell phone picture of vegetables being barbecued at home for Bloody Marys.

The American women’s record holder in the marathon and 2004 Olympic marathon bronze medalist is feeling nostalgic. She’s in town to race Sunday’s Carlsbad 5000, which celebrates its 30th anniversary this year. The last time Kastor raced here was 2002, and it wasn’t a bad day for the lithe, blue-eyed, blonde-haired runner. She set a world record that afternoon, sprinting across the finish line in 14 minutes, 54 seconds, arms thrust skyward.

And on this sun-splashed Chamber of Commerce day, Kastor is both looking back and ahead. She’s 42 now, married and a mother. Four-year-old daughter Piper will be lacing up the running shoes for Saturday’s Junior Carlsbad, tackling the quarter-mile distance. With a mother being a preparation perfectionist, Piper was taken to the Mammoth Lakes track recently, positioned in the outside lane and jogged one lap.

Carlsbad holds a special place in Kastor’s heart. Her history with the race stretches back so far, she wasn’t even Deena Kastor when she first began racing the famed 5K event. She debuted on the seaside course in 1993. Her driver’s license read Deena Drossin, a 20-year-old University of Arkansas sophomore from Agoura Hills, Calif., who was racing for the first time against professionals.

“I was scared to death,” Kastor reflects. “I just remember it feeling like an all-out sprint from the start.”

The then-collegiate runner held her own, finishing sixth in 16:03. Demonstrating her fierce competitive streak, Kastor adds, “I just remember I got my butt kicked.” In 2000, the mother-runner set an American record at Carlsbad, finishing in 15:08, three seconds off the world record. Two years later, she delivered her most memorable performance at Carlsbad, outkicking her competition in a 14:54 world record. Upon crossing the finish line that day, she leapt into the arms of the late Mike Long, the beloved Irishman who recruited elite athletes from around the world to come to Carlsbad and race on its seaside course. Walking away from the embrace, Long shared a secret: “Last night,” he said, “Deena told me, ‘I won’t let you down, Mike.’”

Her world-record performance was special for multiple reasons. Her mother, father, sister and too many friends to count lined the streets. Plus, it came soon after the world cross-country championships, where marathon world-record holder Paula Radcliffe outran Kastor for the win. The result was disheartening not because she was runner-up, but because she held back for too long.

That day, she broke Radcliffe’s world record.  “I felt vindication,” Kastor says. “It put me at peace.”

However, when she reminisces about the race, it isn’t the records and finishing times that make her grin; it’s the interaction with runners and others in the sport that she remembers fondly. Long used to house the professional athletes, mostly Kenyans and Ethiopians, in his home and others he rented in San Diego. The athletes could walk outside, and, in minutes, be running in hard-packed sand, later icing their legs in the Pacific Ocean. Long would stock his pantry and refrigerator with bagels, peanut butter and all the food necessities the Africans would need. “Food that sticks to your ribs,” recalls Kastor.

“It was the ‘Party by the Sea,’” she says. “All the professional runners were on vacation. We had nothing to lose. We’d bank on our fitness to run fast.”

The formula worked marvelously—Carlsbad has produced 16 world records and eight U.S. records. Kastor will have her eye on the clock Sunday, running in the elite women’s race, hoping to break the master’s mark of 15:48, set in 2004.

In the restaurant, the conversation shifts to the future Kastor champion, Piper, who will finish her race on Saturday before mom runs on Sunday. The two share that running gene, but Kastor admits her daughter inherited a foodie flair as well.

“She likes sundresses, robots, red wine,” says Kastor of her daughter, who hands her daughter a mini sip. Like other 4-year-olds, she also enjoys walks while toting a bucket. You never know what she might collect along the way. And she loves chocolate—but the good, dark stuff. “Not milk chocolate. She’s discriminating,” says Kastor. And when it comes to breakfast, the young runner prefers ones from a farm outside Mammoth, Calif., where the family lives, not even free-range eggs from the grocery store. Like mother, like daughter, the developing foodie “turns up her nose and says, ‘These aren’t ranch eggs.'”

Deena Kastor’s Best Race and How She Achieved It