There are 340 miles of dirt roads, unstable ground, sand and some pavement scattered throughout that make up the terrain of The Speed Project 3.0, a six-member relay race that starts at the Santa Monica Pier in California and ends at the “Welcome To Las Vegas” sign in Nevada. This two-day unsupported and largely unmarked race, which also at times involves jumping over some wire fences, has never been attempted by an all-female team before, but in an effort to spread the message that “amazing things happen when women work together,” Oiselle has assembled a hybrid team of amateurs and professionals from their community to tackle the course. The support crew and coaches that will be accompanying the Oiselle team are all women, too.

This year’s race will start at 5 a.m. on Friday, March 10 and end on Sunday, March 12. I caught up with Oiselle CEO and Founder Sally Bergesen to find out why they wanted to put together this team and learn a little bit more about each of the runners.

What made Oiselle decide to put together an all-female team for this particular event?

Bergesen: We’ve always been interested in women charting new territory. We think this race is a great opportunity to show women’s skills and ability, both individually and as a team, on a new stage. We might even beat some boys!

How did you choose the team of women?

Bergesen: The team and crew are a hybrid of amateurs and professionals from the Oiselle community. We have many women on our Volée non-professional team who have incredible stories, run inspired races, and are committed to the community and sport. We wanted to give many of them the spotlight and a chance to do something big. They’ll be running alongside Collier Lawrence, a Oiselle elite who specializes in the steeple-chase. It will be fun to see Collier try out a new distance and event. Additionally, ultra-marathoner and Oiselle pro Devon Yanko will be on the team, bringing her experience and wisdom to the group.

How did you choose the crew?

Bergesen: Races like this are won as a team, and the crew is just as critical as the individuals on the course. The crew is its own amazing group of women, all of whom are capable of running this distance, but have instead chosen to be in a supporting role for this race. The group includes Oiselle pro Lauren Fleshman, two time USA 5K champion, who felt strongly that she wanted to be in a supporting role for a race like this. There’s a sense of reciprocity amongst the group where everyone is eager to show up for each other and return the support they’ve felt from the community over their years of running and racing.

What’s one message that Oiselle wants to give its community and customers based on this particular event?

Who are the six women of “The Bird Strike” team who have decided to tackle this task? Let’s learn a little more about each of them. 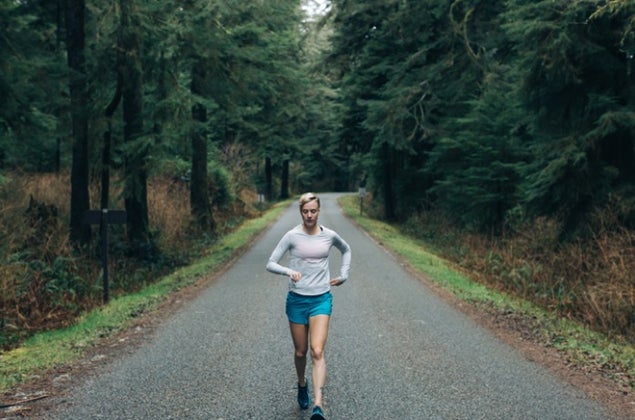 Devon runs roads, trails and mountains from 5K to 100 miles. She has run more than 30 marathons and more than 30 ultra marathons since 2006. Among her many racing highlights include coming in third at the 2016 Western States 100-miler. Her diet includes coffee, sweet potatoes, Brussels sprouts and steak. Her training philosophy is “The journey is the goal.” Devon is always up for a challenge, so whenThe Speed Project 3.0 came up, she thought, Well, I’ve never done that before! While I have run that far unsupported, I have never done it in a race in this way. Sarah is a lover of the outdoors and four-legged friends who describes her diet as “part frat guy, part old lady.” She likes pizza and beer with a hearty dose of Shredded Wheat and oatmeal for balance. She ran the Birmingham Alabama 2015 marathon in 2:52:27, and did her first ultra marathon, the Hennepin 100, in October of 2016. She tends to start every run conservatively and then turn it into a progression run. Her decision to run this race was part of her general approach to life this year. “For the past few years, I’ve chosen a word to guide me through the year. This year I chose the word explore. It means a full year of saying yes to things that light my soul on fire, going after goals in new ways I haven’t tried before, and jumping into experiences that excite me a lot and maybe scare me just a little. It’s about teetering on the edge of the unknown and trusting those around me.” Sarah is an ultra endurance athlete, a corporate communications manager and a Montana resident who says running is her recess. She was the fourth place female at the IAU 100K World Championship in 2015. She likes to “runs lots, eat sweets, sleep hard.” She indulges in ice cream and avocados and describes herself a calculated long-distance traveler. Cathleen is a triathlete, financial analyst and Seattle native who says that she is always tired and sore. She loves coffee, clementines, chocolate milk and potato chips. She likes to run steady and calculated, saving her attack for the finish. When Oiselle e-mailed her about this opportunity, she “said yes and then asked questions…I’ve spent the past 7 years maintaining a pretty competitive Ironman triathlon training program. After 3 years racing as a professional, I made a tough decision to decline my pro license this year. In January of 2017, I had a wide open race calendar with the flexibility to say yes to new adventures.” Collier is an Olympic Trials qualifier and a Picky Bars ingredients manager who specializes in the steeple-chase, a 3,000-meter obstacle race that often involves barriers, hurdles and a water pit. She fuels with peanut butter banana honey cinnamon toast. She describes her running as calm, cool, collected and calculating. Nora is an ultra-marathoner and coach, and is involved with Girls On The Run. She is also a mother, wife and baker. Her fueling regimen includes pickle juice and ginger chews. She likes to go fast, get out front and stay out front. When this opportunity came up, she said, “I have been searching for a race that will be hard physically and mentally, to really reach that breaking point…I mean also when am I ever going to have Lauren Fleshman crew for me, seriously!”

Part of what makes this unconventional and notoriously difficult race unique is that the team does not get the exact course map until after they’ve registered, and they can decide how exactly they want to divide the miles. For example, a few years ago one team decided to divide the entire 340 miles into 10K increments. Each team can decide for themselves how to strategize and use the strength of their different members to conquer the course in the fastest time.

Although there are many unknowns to this adventure, one thing that Bird Strike is committed to is finishing as a team. We can’t wait to see them set the all-female precedent for The Speed Project 3.0 and wonder just how many of the boys they’ll leave in the dust.