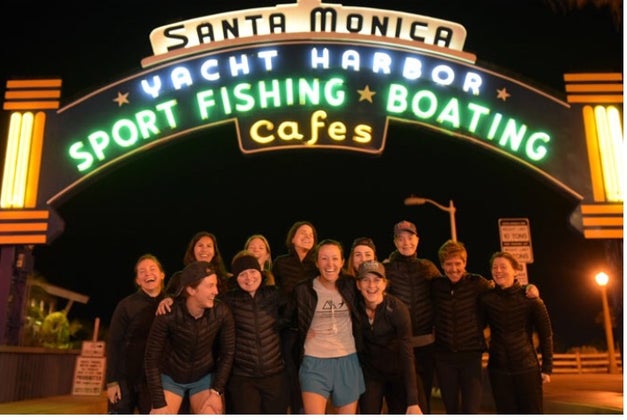 You may have heard of many different relay races, but none are quite like the Speed Project 3.0, which involves teams of six runners covering 340 miles on all types of terrain from Los Angeles to Las Vegas over a two-day period. In previous years, this unsupported and largely unmarked race had only been attempted by either all male or co-ed teams.

This year’s race—which started at the Santa Monica Pier at 5 a.m. on March 10—was different. Three all-female teams stepped up to the challenge, including a team of both amateur and professional runners from Oiselle (with Lauren Fleshman as one of their coaches).

In a pre-race interview with Oiselle’s CEO Sally Bergesen, she said that they were hoping that team Bird Strike would “beat some boys.” It turns out that they beat more than a few boys. Out of the 19 teams, Oiselle came in seventh place and was the number-one female team, covering the 340 miles in 44 hours, 27 minutes and 11 seconds. For all you math lovers, that averages out to under an 8-minute mile.

I was lucky enough to be able to be at the starting line at 4:30 a.m. to speak with some of the runners and meet Lauren Fleshman. The energy at the pier that morning was palpable, as rap music blared while various teams got together for group pictures prior to starting this epic adventure. Throughout the weekend, I followed the Instastories of both Oiselle and The Speed Project as they took us through numerous unmarked trails, 48 miles of Death Valley, and finally the “Welcome To Las Vegas” sign.

Once the race was over, I got some post-race thoughts from both the runners and the crew of team Bird Strike. 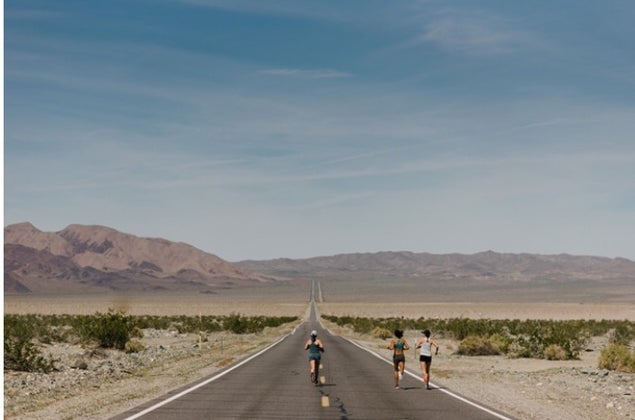 What did you find most surprising or wish people knew about this race?

“This is by no means a Hood To Coast or Ragnar on a larger scale. It is a different beast—and I’ve been part of more than 14 relays. It’s unsanctioned and there are no real rules. You get to do all the planning, and then there’s the strategy part. How we do we rotate runners? How long do people run? How do you eat and sleep? That’s one of the things that made it so special and I think uniquely different from any relay I’ve ever been a part of.” —Robyn Hefner, crew member

“The lack of sleep and total mileage and the logistics that you have to figure out for yourself is amazing. So, is it sort of like a Ragnar? Yes, in the way that kittens are sort of like lions.” —Erin Block, crew member

“I didn’t realize what an impactful race this would be. I didn’t have any comprehension of how challenging it would be; it was incredibly dynamic and hilariously fun. Sure, we were competing against other teams, but at least for me, at some point, it really just became about supporting one another to the finish. Our team became an instrument of trust and certainty that each person was doing as much as they could; the best that they could. That’s all that mattered.” —Sarah Bard, runner

“There is a course packet, but a lot of details come via social media. I was expecting an organizational disaster, but they’ve given you enough details to really create and develop what and how you want to run it. The way they’ve organized the race pulls you into the community to find out what’s going on and in the process, you get more involved than if you were just picking up a bib number. There are no rules, just opportunities.” —Collier Lawrence, runner

“I was surprised at the lack of complaining from our runners. You could sometimes see the fatigue or pain on their faces, but almost no negative words were spoken. I was also surprised that not one of us went out on Sunday night in Vegas. There was talk of steak dinners and gambling and tattoos, and then we went to a nearby restaurant and went home to watch some footage of the relay instead. What happens in Vegas, at least for the Bird Strike crew, doesn’t even happen in Vegas.” —Erin Block, crew member

What was the best part of this experience?

“Experiencing strangers coming together toward a common goal, supporting one another selflessly, thoughtfully. It was allowing ourselves to be humbled, to be responsible and ask for help when we needed, and to offer it when we could. Experiences like this make you feel really great about the world, the people living on it and the impact you can make through small actions.” —Sarah Bard, runner

“There was a moment on the course when I realized we would all be fundamentally connected as people, as a team, for the rest of our lives. It’s amazing to have that realization in the moment. It was magical.” —Meg Murray, crew member

“Having that feeling of teamwork and understanding throughout. The way we knew what the other needed even if it meant more suffering on our own part. Of course, being the first place female team to do anything like this. We made history!” —Nora Bird, runner

“The best part of the trip was being part of a team. Everyone did her part to contribute, whether as a runner or driver or navigator or sandwich-maker or biker or running companion or impromptu sports psychologist. This was a group of high-powered, impressive and accomplished women, and any one of us would have emptied the RV’s sewage tank. It just happened to fall to Lauren Fleshman. I held the hand sanitizing wipes for her.” —Erin Block, crew member 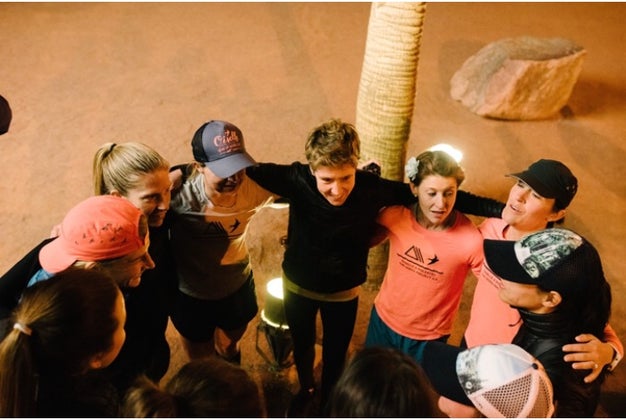 What are your overall thoughts about taking on this venture?

“Heading into this, there were so many questions I had about the course, weather conditions, logistics, team dynamic, feasibility. This was a totally new way to experience racing for me, someone with 12 years of controlled, professional running experience on 400-meter ovals. I had two conflicting realizations: I wanted desperately to be a part of it, and racing it was not possible for my body. This opened the door for me to serve as one of the six crew members, to spend the weekend focused on logistics, strategy, problem solving, Cup of Noodles soup-making, mood boosting, being totally tuned in to all these women’s needs and meeting them the best I could as my body and mind degenerated from fatigue. It was humbling and empowering and without a double one of the best adventures of my life.” —Lauren Fleshman, crew member

“The distance was never the barrier. I don’t think many people doubt that women can prevail over ultra distances. The Speed Project was a gender-driven cultural divide, not just in that an all-women’s team had never raced it, but in the type of race itself. Men’s competitions have always allowed and even encouraged a sense of lawlessness and the ability to take a run at something not only difficult, but dangerous as well. Women are tough, yes, but we’re also rebellious. Giving women the opportunity to throw their full weight at an unsanctioned, rogue event like this is probably the most progressive thing Oiselle can do, as a brand and company.” —Sally Bergesen, CEO Oiselle

On that note, I can’t wait to see what other history-making moments lie ahead not just for Oiselle—but all women runners.