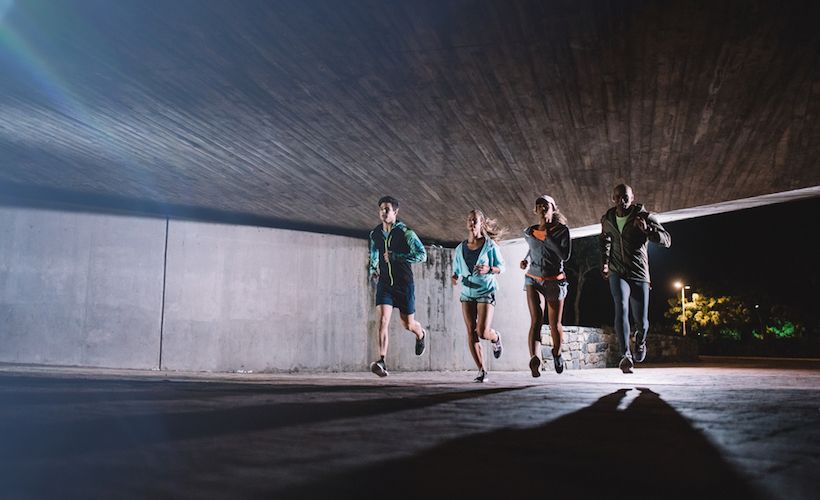 How To Stay Safe In The Dark

It seems so basic, but apparently some runners still don’t know the correct side of the road on which they should run! Based on a new study by researchers in Finland that was recently featured in a Washington Post article, runners have a 77 percent lower risk of being hit by a vehicle when they run against traffic.

The only place safer than running against traffic is on a sidewalk. If there is no sidewalk, you should always run facing traffic. Why? Because you cannot react to what you can’t see.

The data collected for the study made the analysis clear–of running-related accidents in Finland reported on rural two-lane roads between the years of 2006 and 2010, there were 18 accidents involving a fatally injured pedestrian and 87 accidents involving a non-fatally injured pedestrian. The main finding was that the effect of facing traffic compared to running with traffic was a 77 percent decrease in pedestrian accidents. The results further showed that the effects were greater for main roads than for secondary roads.

We are hoping this is news to almost no one who is reading this; however, all runners would do well to be more aware, even while running on the correct side of the road, facing traffic. Here are additional ways you can be extra cautious, especially as the darkness of winter descends upon runners everywhere:

Always pay attention to the traffic ahead of you and notice if you need to pull off the road to allow for two vehicles to safely pass.

When it comes to your own personal safety, you can give up the music for a run or two. If you must indulge, keep the volume low so you can hear what’s going on around you.

In a world of distracted driving, try to make eye contact with a driver who is making a turn in front of you. Always stop (and yes, pause your watch if needed) until you make eye contact. Drivers are much less aware of you than you’d think.

The best way to avoid being hit is to make yourself seen. Wear bright colors, reflective vests or attach blinking lights to your clothing or running shoes.

Take The Drive By Test

The next time you’re in the area, drive down the same busy road where you run to deem if it’s truly a safe route for running. What seems safe while running can seem entirely unsafe as a driver. Perspective is everything.

The only time it’s reasonable and possibly safer to run with traffic is while navigating a blind corner or the crest of a hill. If there is no visibility (or place to jump off the road) you are better off crossing to the opposite side of the street early and returning to the correct side once visibility improves.

Alarming Statistics About Runner Safety And How To Stay Safer

In the Wake of a Tragedy, We Look at Prioritizing Runner Safety on the Road

8 Tips To Run Safely (And Confidently) Outside