In case you’ve missed the recent post-Olympic year, post-New Year track and field news, a few of the biggest names are retiring from the sport they are so good at: Nick Symmonds and multi-sport couple Ashton and Brianne Eaton. 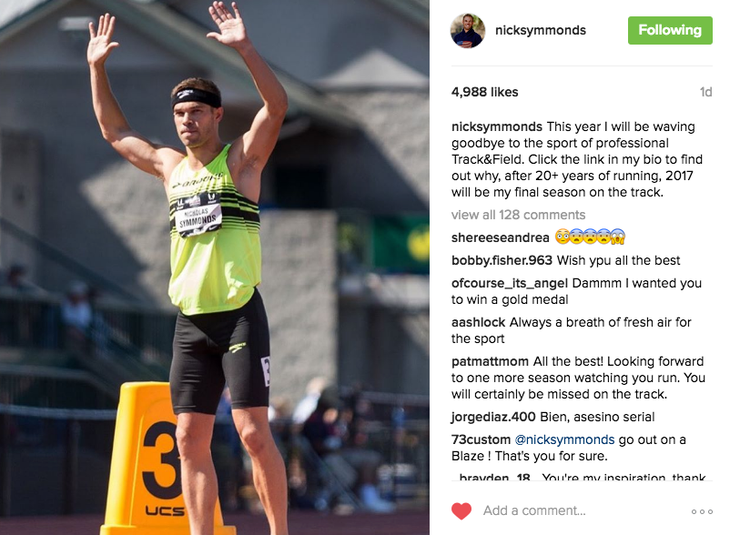 The defending U.S. champion battled injury during 2016 and missed his spot on the 2016 Olympic team, his would-be third team.

“My BIG goal in 2017 is to do everything I can to earn my spot on Team USA to represent my country at the 2017 World Outdoor Championships,” the runner said on getrungum.com.

His swan song will not be the last we hear from the king of the oval, we hope. Outside of racing two laps around a track, Symmonds has taken some very public stands against restrictions placed upon athletes and the sponsors that support them. In 2015, he skipped the world team headed to Beijing due his inability to get clarification from USATF on when he can and cannot wear his supporting sponsor, Brooks, at non-“Team USA functions”. He also made headlines when he sold space on his arm in 2012 and 2016 for the highest-bidding sponsor. So while the track guru won’t be competing beyond this year, we doubt this is the last we will hear from him when it comes to supporting his sport and his fellow athletes.

Additionally Ashton Eaton, America’s favorite, and fastest, decathlete, and Canadian Brianne Theisen-Eaton—the current world indoor champion in the pentathlon—both announced their joint retirement via Instagram. The married couple’s @WeAreEaton account and brand, which boasts more than 62K followers, stated, “…we’re ready to move on to the next thing, the next passion and the next chapter of our lives.” 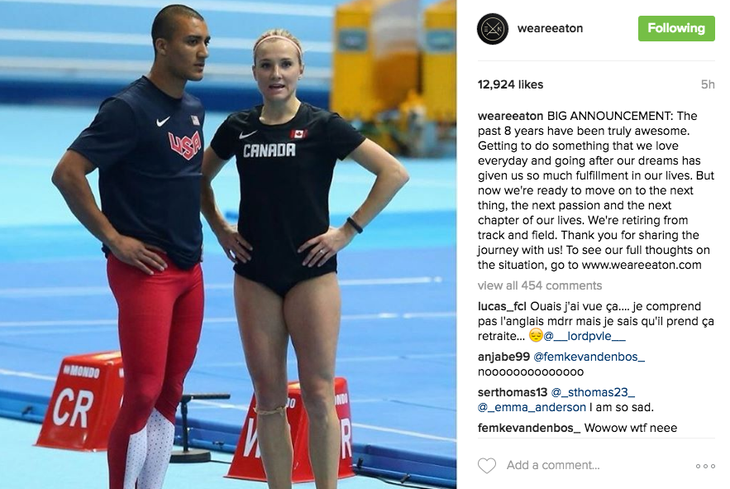 Ashton won his second Olympic decathlon in Rio last summer, and there was speculation of retirement around the games when he stated he would not be back in 2020 to compete in Tokyo. He is one of only three two-time Olympic winners in his discipline, which speaks to the intense grind that is training for and competing in the 1o-sport event. Oh, and he also holds the world record—so he’s been rightfully called the best decathlete of all time.

Brianne, who took him bronze in the Olympic heptathlon last summer, is joining Ashton to find green pastures beyond the sport. She said in her own retirement announcement on Instagram: “I remember saying that I was just happy to be done; that I was exhausted and relieved to have all the stress of the Olympic year over with. But I didn’t realize how deep rooted those feelings were.”

We are still excited to follow along with the adventures of “We Are Eaton” to see what life as an extremely accomplished endurance couple looks like outside of stadiums and training days!