Sunburst under Mesa Arch, with the arches and landscape of Canyonlands National Park appearing under the arch

On March 11, 2020, citizens of Moab, Utah gathered in the Grand County Council chambers for an emergency meeting. The council proposed an ordinance to ban all indoor events with more than 100 participants and outdoor events over 250 due to the coronavirus (COVID-19) pandemic. Attendees overflowed into the hallway and sat on the floor as concerned business owners protested the crippling economic effect of such severe actions. A task force of officials from Moab Regional Hospital and other health departments spoke to the necessity of flattening the curve. The motion failed 3-3.

The proposal was an immediate blow to Justin Ricks, the owner of Mad Moose Events, which hosts ten running events in the Moab area and brings thousands of visitors to the city. The Canyonlands Half Marathon and Skinny Tire Festival occur simultaneously in mid-March, and are regarded by locals as the kick off to the busy season. Hotels, restaurants, and grocery stores reopen, order extra supplies, and bring back staff laid off during the slow winter months.

Ricks had already spent thousands of dollars on hand sanitizers, wipes, and extra hand washing facilities and created a safety plan for volunteers and runners. However, Mad Moose and Skinny Tire felt it was in everyone’s best interest to cancel their respective events by the time the meeting was held.

“If we host this event and there is a problem, it could jeopardize all other events that we host in town,” said Jordan Ricks, Justin’s business partner, said in the meeting. “So we decided due to the circumstances, under the threats that we experienced, that it would be best to cancel these two events to preserve the races in the future.”

Grand County’s initial proposal was inconsequential within days, though, as Utah Governor Gary Herbert and President Donald Trump limited gatherings from one hundred people to ten as the reality of the coronavirus pandemic set in throughout the country. Mad Moose initially closed registration for two more races in April but later cancelled them entirely, and by March 17th they had closed registration for all races until June.

When An Event is Canceled, The Community Feels It

Moab is a small city that thrives on big outdoor recreation. Turning away from the gas and extractive industries on which many rural Utah towns still depend, Moab locals focus their energy on tourism. The town has a multitude of restaurants, hotels, and guided adventure opportunities for visitors, as well as two of the most popular national parks in the southwest. It hosts a vast number of running, biking, and Jeeping events, and is a popular destination for hikers, climbers, and river runners as well.

“For other rural counties in Utah to say ‘we’re gonna restrict mass gatherings,’ that doesn’t really have anywhere close to the impact to what feeds the community as it will here,” Councilman Curtis Wells said at the March 11 meeting.

Case in point: Mad Moose purchases perishables the week of events and had not yet obtained them, so City Market absorbed the cost of the extra food. The Comfort Suite Moab Near Arches lost 27 rooms in a 94 room hotel in less than 24 hours, and other hotels claimed similar or higher losses.

The races are important to various nonprofits in Moab, as well. Mad Moose donates a portion of proceeds to multiple local organizations, including Young Life, Community Rebuild, Sierra Club, and the high school track team, among others. Despite the cancellations, Ricks still contributed the funds to these groups, adding to the lost revenue for the race organizers, including the cost of shuttles, race bibs with chips, food, plus allowing racers to roll over 65% of their registration from the canceled events to future events. 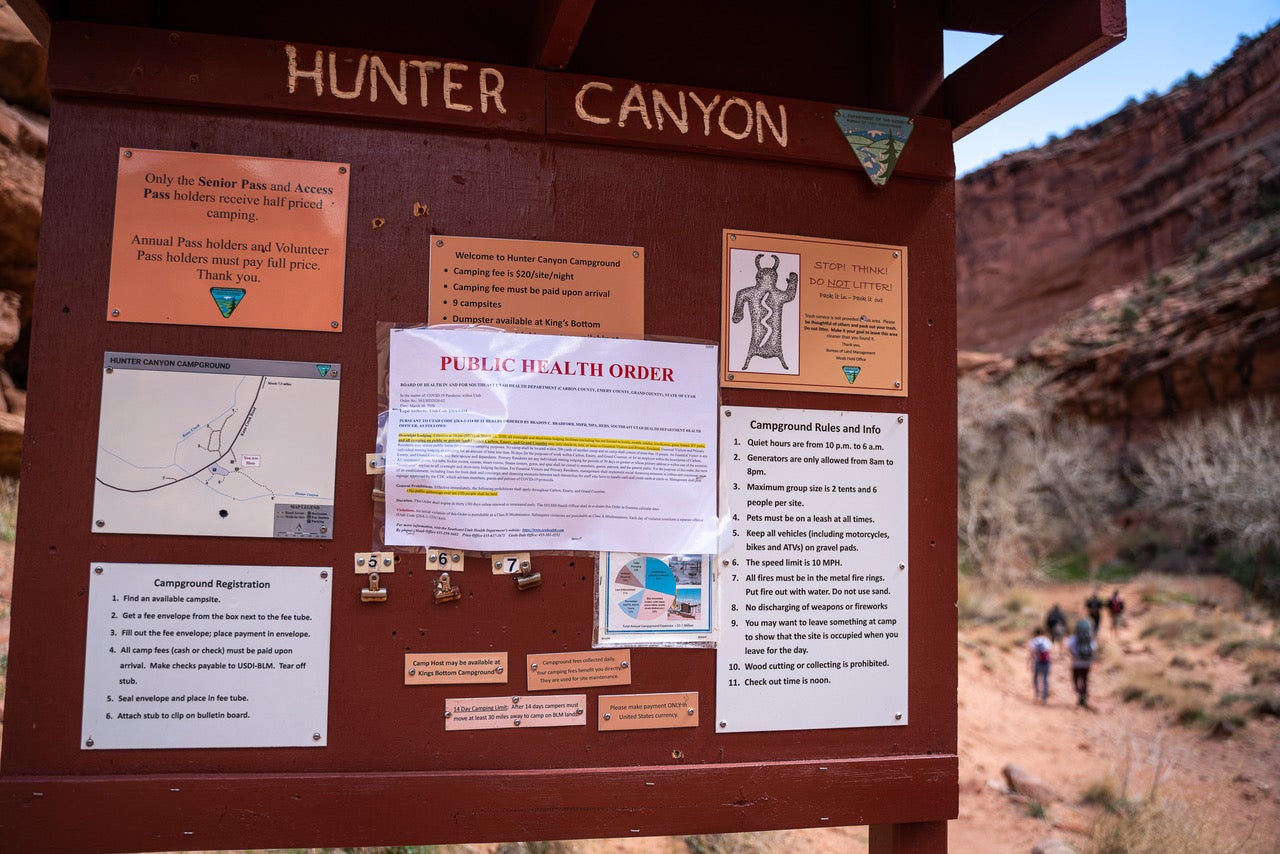 Making Moves for Public Health in a Time of Coronavirus

Small, rural communities such as Moab now face a dilemma. As gateway cities to the most popular outdoor destinations, they depend on visitation but are threatened and limited by their inadequate medical facilities.

Other popular tourism towns such as Jackson, Wyoming acted immediately and shut down spring events, but they are entering the rainy, dead time deemed “mud season” and are months away from peak summer visitation. Moab’s southern location and shoulder-season warmth draws visitors long before other outdoor communities, and the coronavirus pandemic economically threatens citizens who have already been out of work since November.

Despite Southeastern Utah Health Department’s (SEUHD) travel advisory, the weekend the races would have been held (March 14 and 15) was still packed in Moab, as Americans continue to regard the busy Utah desert as an ideal place to social distance themselves. Carrie Finn, owner of popular food truck Quesadilla Mobilla, said that they were busy despite the pandemic, though they did not experience the “usual insanity.”

But on March 17th, SEUHD issued a 30-day closure of lodging and dine-in facilities to prevent a tourism-fueled coronavirus epidemic in Grand County.

What many protesting business owners and current visitors fail to acknowledge the immense threat posed by asymptomatic carriers of COVID-19. Everyone has been advised not to travel if they feel ill, but healthier, athletic individuals such as runners and climbers who might not present symptoms could be especially threatening to the unprepared community that has only three ventilators and no intensive care unit.

Despite the influx of bad news, Ricks is optimistic about the future of Mad Moose. Many registrants were from Utah and Colorado, and he hopes that they will come back for future events. The coronavirus pandemic is a tough time for everyone and responses on local and national levels will be key to the future of tourist economies and destination races.

Step Away from the Elliptical: Try These 3 Ways to Cross-Train Instead

The 2020 Boston Marathon is Canceled