With high temps being reported from Eugene, Oregon, most of the race was quiet and slow until racers started pulling away with a mile to go. “That was my hunch of what was going to happen,” said Cooper, noting that she felt she pulled away a second late, and then unable to make up the difference in the final stretch.

Three days prior Cooper ran a much faster 15:07.80 prelim to get the Olympic qualifier. As she pulled far away from the pack and the crowd realized what she was doing, they became buoyant with cheers.

As hard as she physically pushed in that race on June 18, she doesn’t regret the effort or blame that for potentially missing a spot on the Olympic team. “I was shocked at how resilient my legs seemed to be,” she said in a post-race interview.

Cooper has a tendency to rouse the crowd—though not always intentionally. Running fans might remember Cooper (then D’Agostino) from the 2016 Rio Olympics where she fell twice after tangling with another runner and still managed to finish the race on a torn ACL. This was her triumphant return to the track.

In the 5,000 meter final, there were plenty of people pulling for her.

“If you aren’t rooting for Abbey Cooper in this 5K then you’re wrong,” wrote Eric Hansen.

Mrs. Parker added a similar sentiment, writing on Twitter: “Abbey Cooper might be my favorite athlete-from her incredible acts of sportsmanship to being able to compete with pure heart, all by herself to get the Olympic standard in the qualifying round. She is the definition of a competitor. I will always be rooting for her. Always.”

Abbey Cooper might be my favorite athlete – from her incredible acts of sportsmanship to being able to compete with pure heart, all by herself to get the Olympic standard in the qualifying round. She is the definition of a competitor. I will ALWAYS be rooting for her. Always. https://t.co/T3UxWfEfMp

There were countless viewers who wanted to see Cooper place in the top three and earn a spot on Team USA.

Really wanted to see Abbey Cooper pull that off. Such a gutsy athlete.

One fan in particular was really broken up over the results. You OK, Simon? 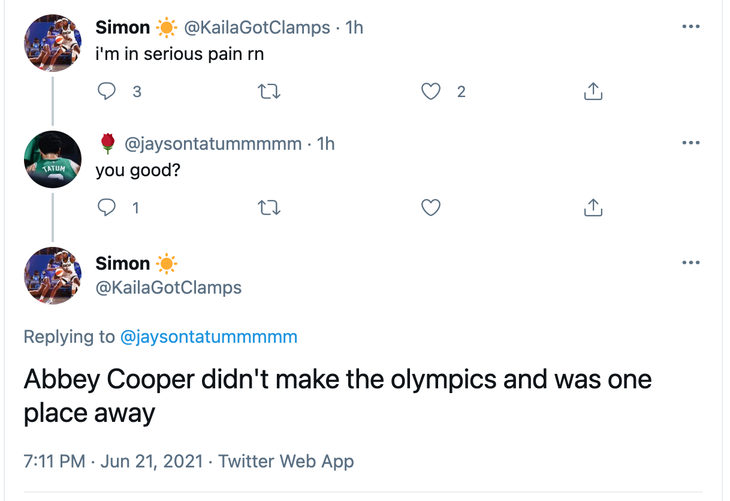 Despite a seemingly heartbreaking fourth place finish, Cooper says she is grateful to feel healthy and be running consistently since 2016.

“This is the first time I’ve really felt like myself at the championship level since Rio, really,” she says. “And even before Rio I was hurt. This is probably the best stint I’ve put together in my professional career. I really am so grateful about that.”

Pushing for the qualifier in the prelim could end up benefitting Cooper. All three top women in the 5,000-meter final could potentially make the team in the 10,000 meter. (That final is on June 26.) If they did, that would leave a spot open for Cooper as an alternate.

Had she not kicked for the qualifying time (15:10) earlier in the prelim rounds on the first day of the Trials, she would not have gotten it in the slow and hot final round.

It’s one more step along the road to Tokyo for her fans to keep hoping for her.

Abbey Cooper wins the day in my opinion. Super inspiring.

Abbey Cooper a hero. And what a race for the gtown alum Schneider!!

At the end of race-day, it seems at least that Cooper will be OK (even if Simon’s not). “It has really been such a roller coaster the past five years. I’ve been engaged, mentally, fully believing that I have a lot more in me,” she said.

RELATED: Abbey Cooper is Answering Her Calling at the 2019 U.S. Outdoor Championships

Editor’s Note: This story is part of our  2021 U.S.A. Track & Field Olympic Trials coverage. You can find all of our stories here.